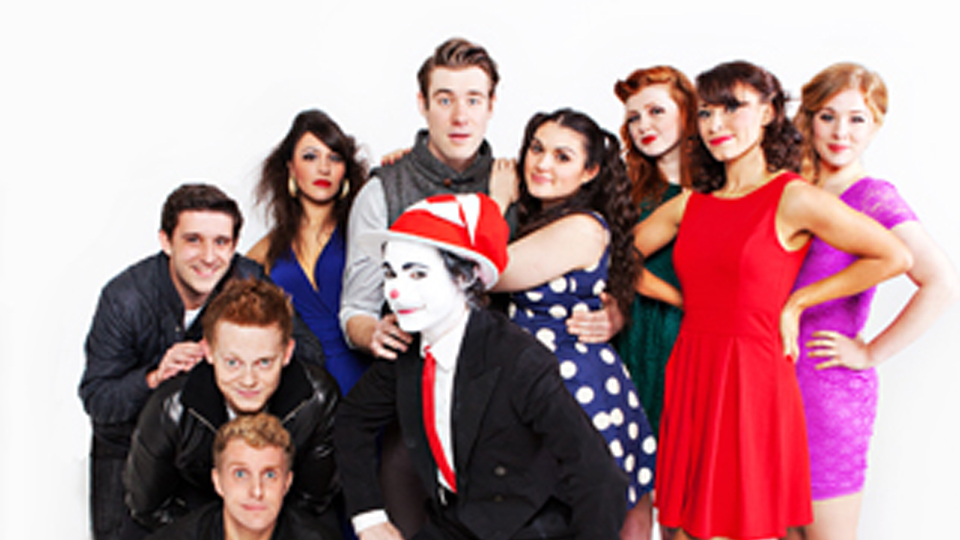 Given the critical-mauling of practically every recent film adaptation of a Dr Seuss story – with a common observation being that the material’s treatment is always too bizarre or adult – this fairly low-key revival of Seussical, the stories’ original stage adaptation (it debuted on Broadway in 2000), is surprising for two reasons. First: that it exists at all, because the risk of people not taking kindly to you getting your mucky fingerprints all over Dr. Seuss’s golden ideas is very great (and in this sense the dreadful press image promoting the show alone spells bad news…). Second: this time around the team in question has bucked the trend and anchored their work in full-on kids’ territory: admirably they’re not trying to be too clever.

It’s a shrewd but sensible move, and works like a coat of armour against scrutiny. I mean, the kids in the audience during yesterday’s performance didn’t seem particularly amused by any of the ensemble cast’s shenanigans, and still half the jokes and quirks went over my head, never mind theirs (Horton the Elephant, for example, does not look like an elephant at all, but rather like a man in his twenties wearing a wooly hat; I was extremely confused by this to begin with and was having the suspension of disbelief debate with myself until the irony slapped me around the face). Nevertheless, the kids in question remained silent and transfixed throughout – by this standard you could call the show a runaway success, especially for any parents involved looking for a moment’s respite while taking a lengthly stroll down memory lane and revisiting their own childhoods. For this succinctly-written show, which interweaves stories including The Cat in the Hat and Horton Hears a Who! does conjure up the spirit of the stories as well as the zany feel of the animation. Some of the paintwork on stage is especially effective here despite its evident simplicity.

My previous comment about respite not withstanding, the show was by no means a relaxing experience; I felt very tense when some antagonistic monkeys (with trendy haircuts and skinny jeans) stole Horton’s clover and ran riot through the audience almost stamping on my mobile phone en route (my fault for placing my bag practically in the aisle). I also felt jittery given the large handful of exceptionally shrill voices emanating from the stage (give or take a fantastic one: you’ll know who I’m referring to when you hear her). Furthermore, sometimes the kids TV presenter acting style grates. That said, the two characters with most to say tread the perilous tightrope of cuteness and evade annoying territory with real sophistication: David Hunter as Horton is gentle and endearing and Kirsty Marie Ayers as Gertude McFuzz is warm and lovely, adopting a thoughtfully squeaky voice and making good use of her big, sad glossy eyes to add texture to her performance. I’m quite looking forward to seeing her in something again.

Beyond Hunter and Ayers, the entire cast make up for any vocal shortcomings with their collective charisma and young, dynamic energy: it’s clear the team are having an absolute ball and that makes the show work. Hopefully it doesn’t become a chore for them a few weeks down the line because that’s when the cracks might begin to show. But based on yesterday’s performance, if you’re looking for some affordable fun this December Seussical comes highly recommended whatever your age.