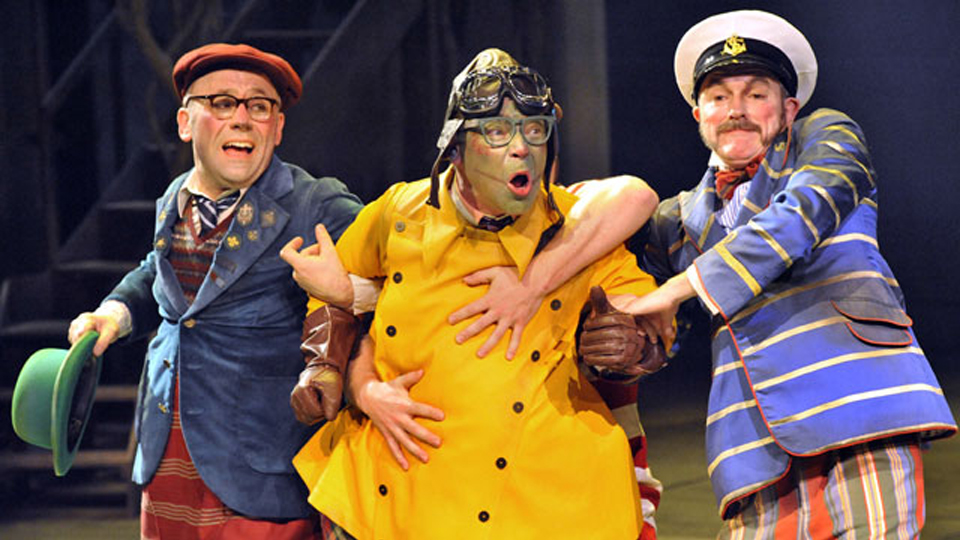 Alan Bennett’s critically acclaimed adaptation of The Wind in the Willows takes centre stage as The West Yorkshire Playhouse’s festive treat this season. Based on the children’s novel by Kenneth Grahame, the play follows the adventures of Ratty and Mole as they become embroiled in the hedonistic and chaotic world of Toad of Toad Hall.

The play is directed by outgoing artistic director of the Playhouse, Ian Brown, in his second staging of the play in ten years. Brown’s revived version is clearly the work of both experience and continuous refinement.  Now an expectation of the Playhouse, the set design is truly inspired; presenting a circular subterranean wonderland capped by a grassy verge. Rotating as the characters weave throughout its hidden levels, there is a genuine sense that the audience are working their way beneath the earth into the living quarters of a myriad of creatures and characters. Spectators of all ages will be enthralled by oversized “toyland” interpretations of a motorcar, caravan and gorgeous steam engine. Meticulously choreographed on and around the spinning riverbank carousel, Brown has ensured there is a living world that can be enjoyed from every angle. It is a visual feast which never ceases to fascinate.

A commendable ensemble buttresses a flawless cast of colourful creatures. Mole is played with a radiating warmth and honesty by Joe Alessi, partnered with Jack Lord’s wonderfully stiff and upbeat Ratty. Tony Jayawardena provides an authoritative Badger with the gusto of Brian Blessed, whilst Tom Jude’s downtrodden Albert the Horse captivates with a droll Brummie drone. The unquestionable highlight is Paul Kemp’s Toad, whose counterpointed warmth and vitriol, punctuated with camp flourishes, personifies the good-natured schemer perfectly.

Kenneth Grahame’s world has been recreated perfectly on stage. However it is forever Alan Bennett’s voice which can be heard throughout in the dialogue, particularly in Joe Alessi’s Mole who is played with a shy, endearing Yorkshire warmth and honesty. Bennett’s wit is equally evident in contemporary content of the story; criticising the greed of mass consumerism and the damage it causes upon the natural world. It is a message which will resonate with all ages.

Pitched with a warmth and reverence to the original story, yet executed with a knowing intent for adult audiences, The Wind in the Willows is a superb theatrical achievement. Classic yet relevant, with an indelible visual presentation, it is arguably the perfect Christmas treat for all the family.