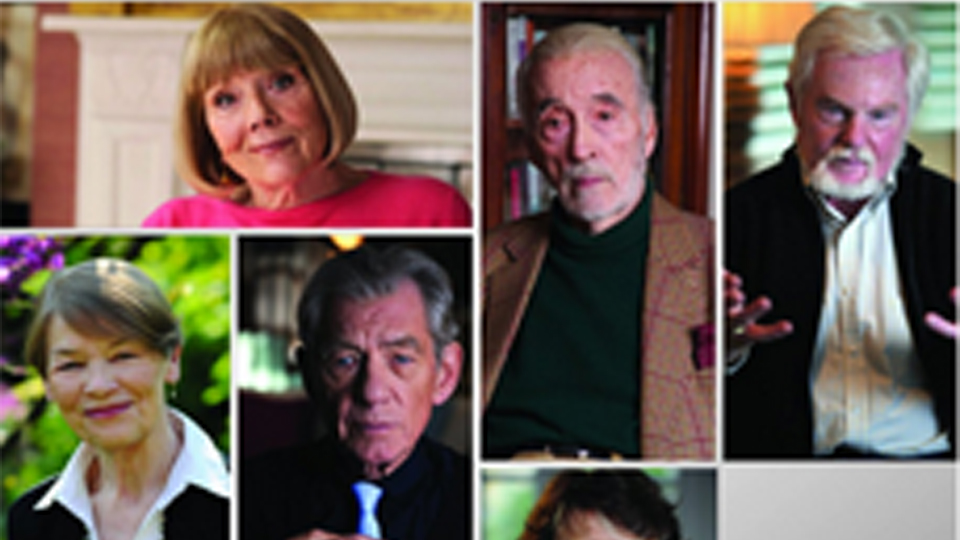 There’s something very special about the generation of British actors who emerged in the 1950s, and this delightful documentary series reveals some interesting common threads. British Legends Of Stage And Screen provides unique portraits of the lives and careers of eight of Britain’s best-loved living actors, where contemporary interviews with them in their autumn years are interspersed with footage from key roles, and, better yet, rare photographs of theatrical performances.

Every forty-five minute episode is narrated by Radio 4’s Sue MacGregor in her familiar reassuring dulcet tones. Its excellent approach allows the actors to simply talk without the imposition of an interviewer. There are no direct questions, nobody else in shot, and no Jonathan Ross-like clown constantly interrupting: British Legends Of Stage And Screen gives the actors the time and space to tell their own stories unhindered, opening up a thoroughly engrossing and mesmerising compilation of theatrical and showbiz tales linked by well-chosen clips.

Almost uniquely, British Legends Of Stage And Screen covers the stage careers of these great British thespians, recognising the equal importance of their theatre work as compared to their big screen outings. It makes this series a positive goldmine for lovers of the British stage, especially the names on this collection, who, for the most part, continue to tread the boards and delight audiences all over the world with the magic of live performance.

There’s a wonderful contrast between individual contributors. Michael Gambon spends virtually the whole interview taking the proverbial out of himself and others, his eyes streaming at times as he recalls moments of stupidity. An inveterate prankster, Gambon remembers how during his early years as an actor he was threatened with the sack if he didn’t stop giggling during performances! Gambon is honest too, recalling his unhappiness over a stage performance of Uncle Vanya, affording his perceived failures with as much insight and lucidity as he reserves for his successes. Naturally, clips from The Singing Detective are used, but more commendably still, scenes from the controversial The Cook, The Thief, His Wife And Her Lover. Viewers of a squeamish disposition be warned! Another delightful segue sees Gambon remark that he’ll accept almost any offer of work, so long as he’s available, which cuts to a still of him in the remake of Doctor Who.

Claire Bloom has an interesting story, as she relates her upbringing with immigrant Jewish parents, and the close bond she had with her mother. She’s also forthright on her marriage to Philip Roth, and is surprisingly regretful about her career, concerned for a lack of variety in her parts. She comes across as self-effacing more than anything else, sharing this in common with Derek Jacobi, who bewails his smooth, warm face which has always seen him looking younger than his years and cast in mostly kind parts. It’s hard to imagine anyone other than an actor lamenting their lack of haggard facial features – but it’s just one of those things that distinguishes them as a breed apart. The feature on Jacobi rightly recognises the significance of I, Claudius, not merely as the springboard to international recognition for him, but as landmark television in its own right.

The second disc profiles three remarkably diverse actors: Christopher Lee, Diana Rigg and Michael York. Lee is the odd-person out amongst his peers on this collection because he’s significantly older, and isn’t from a stage background at all. It could also be argued that his film career as a Hammer Horror stalwart, Bond-villain and supporting actor in the thrilling The Lord Of The Rings trilogy and execrable Star Wars franchise is less artistically significant and meritorious than the canons of his peers. Nevertheless, he’s an entertaining raconteur, relating how he fell into acting and revealing some startling facts about his ancestors. Someone should politely tell him not to sing.

Diana Rigg is unremittingly engaging. Like Lee, she has a following for populist works such as The Avengers and as a James Bond girl (the word she uses to describe her co-star George Lazenby is unpublishable here – but one has to admire her gutsy honesty!) but they came after building up a stage career, and her lead role in classics such asMedea are generally regarded as modern benchmarks.

The foppish Michael York offers another contrast, bringing a touch of glamour to the proceedings with his work inCabaret alongside cult icon Liza Minnelli, and for director Franco Zeffirelli. Interviewed in cool shades, he provides an abundance of fine anecdotes.

The final disc sees Glenda Jackson and Ian McKellen take the final two slots of the series. It’s an appropriate pairing, given their political activism; which for Jackson meant a change of career to become a fully-fledged Member of Parliament. Arguably the greatest female actor of her generation, and one of Britain’s most decorated performers, it’s possibly a shame. But an impassioned defence of the arts in her interview reveals another truth – that in a time of severely slashed funding for the arts, someone of Jackson’s capability and persuasion is in the best place to do the most good. From her film career she offers an interesting reflection on Oliver Reed, opposite whom she thrice starred.

Ian McKellen’s activism didn’t force him to change profession, but coming out and fighting for gay rights in the 1980s at the time of Section 28 was a hugely significant watershed moment for the cause, and it’s proper that McKellen’s instalment examines this in detail, as well as his decision to accept a knighthood from the Thatcher government. Trevor Nunn’s RSC production of Macbeth is rightly identified by McKellen as one of the best screen adaptations of Shakespeare’s tragedy, and his performance in the lead role is, for my money, about the best acting you’ll ever see.

What’s so special about this generation of performer seems to be their knowledge of life and understanding of deprivation, suffering and loss from an early age, borne out of the devastating World War II that formed the backdrop to their childhoods (or in Christopher Lee’s case, meant active service). The early hardship, the fought-for scholarships to drama schools and the cutting of teeth in repertory theatre, earning their stripes in a company before the big roles and better money came along divide these actors from the stars of today. Then there’s the National Theatre, newly formed by Laurence Olivier at the time many of them were starting out, where they undertook their apprenticeships. There’s a huge amount of affection for the often-intimidating giant of Twentieth Century theatre amongst the contributors.

This series is a remarkable achievement, and a great insight into hugely significant actors who are able to now look back over (in many instances) the first half-century of their careers. Undoubtedly many or all of them will add further achievements to their CVs, but they will do so having already shaped their identities as performers and reserved their slots in theatre history. This intimate series reveals how their lives and careers were shaped, and how the two often interweaved.

British Legends Of Stage And Screen is terrific, and a must-have for all fans of great British actors and theatre history. Sure, it’s possible to wonder why John Hurt, Patrick Stewart, Tom Courtenay, Helen Mirren and Judi Dench aren’t included, but this is pure greed from a reviewer who was left wanting more, and is hopeful of a further series…