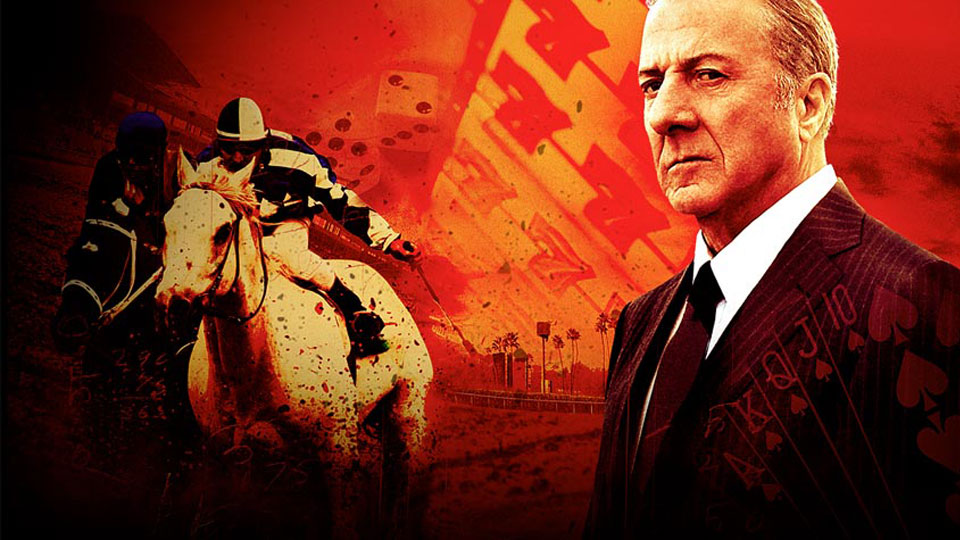 Career mobster Chester ‘Ace’ Bernstein (Dustin Hoffman) is released from prison after serving a three year sentence. Along with his driver and long-time friend Gus (Dennis Farina), Ace makes plans to take control of the Santa Anita racetrack in L.A. He’s also out to get revenge on those who were responsible for sending him to prison. Meanwhile four gamblers try to win a huge cash prize whilst ageing trainer Walter Smith (Nick Nolte) tries for a second chance with an untested racing horse.

Luck certainly didn’t live up to its name as it was cancelled after only one season due to protests from PETA after the death of three horses during the making of the show. The showrunners and the network came to the conclusion that despite adhering to all of the usual safety regulations for using animals on set, they couldn’t guarantee that no more horses would be injured or die. Faced with an impossible decision it was decided to end the show despite acclaim from TV critics and a loyal fanbase.

Over its only season Luck crafted an intricately woven set of stories that unravelled at a slow but satisfying pace. Alongside frenetic horse races, there is plenty of well-written dialogue, superb acting and a stellar cast. Deadwoodproducer David Milch joined forces with director Michael Mann to create the drama series ensuring there was a mark of high quality over the show. The attention to detail for the late 60s setting is impressive with the sets and locations looking very convincing.

Not everyone will like Luck. Firstly there are some distressing scenes with horses that we found a little difficult to watch and the plot is really rather slow. Each episode doesn’t exactly whizz by but you can feel the quality oozing from your TV screen. Dustin Hoffman is as fantastic as ever in the lead role of Ace whilst the impressive supporting cast of Nick Nolte, Jason Gedrick, Dennis Farina and Ian Hart adds even more weight to the show. For Hoffman this was his debut TV role and it’ll be interesting to see if he does any more TV work in the future.

Extras on the boxset include audio commentaries, episodic previews and recaps, and behind-the-scenes featurettes.

Luck: The Complete First Season just starts to get going shortly before the end of its 9 episodes and it’s a real shame that the show will not get the opportunity to continue. It’s another example of the high standard of TV that comes from the HBO stable and it’ll be sorely missed by those who watched it during its initial run. At least fans can pick up this boxset and rewatch the episodes that made them fall in love with the show.