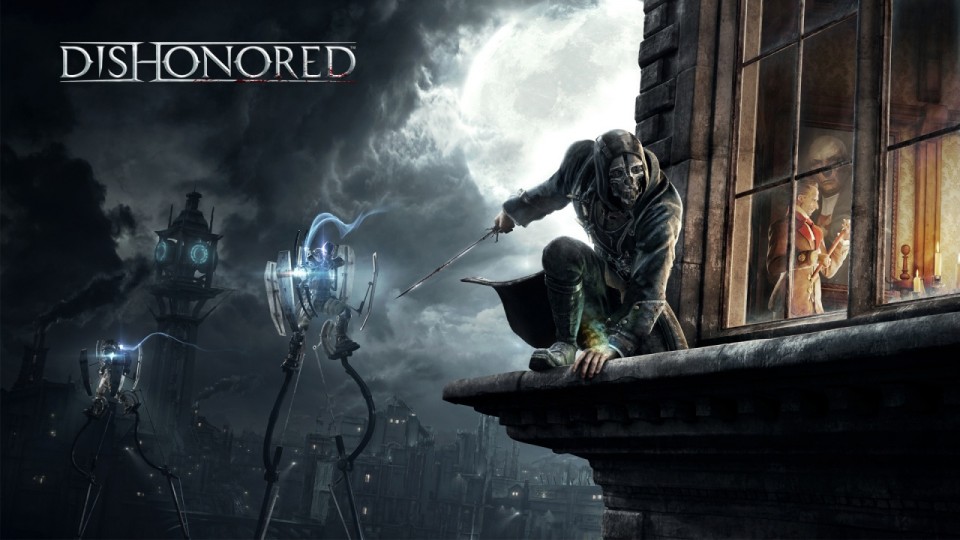 Dishonored is a first-person stealth action game developed by Arkane Studios and published by Bethesda Softworks. The game is built with the Unreal Engine 3 and we took a look at the Xbox 360 version. The game is also available on PC and PS3.

The game is set in a late 1800’s inspired industrial city called Dunwall. The city is modelled on cities such as Edinburgh and London during that period crossed with some strange technologies. The city is a whaling city and whale oil appears to be the fuel of choice. There’s also a plague going around which is carried by rats that turns humans into infected zombies called Weepers.

You play as silent protagonist Corvo Attano, a bodyguard to Empress Jessamine Kaldwin. Near the start of the game Corvo is framed for the murder of the Empress and her daughter Princess Emily. Corvo is imprisoned and due to be assassinated until he is helped by a band of Loyalists. Your first mission is to escape captivity and you make your way to the Hound Pits pub which serves as the hub for the rest of the game.

During your first nights rest at the pub you are visited in your dreams by a mystical being that grants you supernatural abilities and gives you a bizarre mechanically altered human heart. From then on Corvo must turn assassin and each mission is a sandbox that allows you to pretty much play your own way to take down your next target.

Corvo begins with a single ability called Blink that allows you to teleport short distances. In the game there are five more special powers to unlock as well as four passive ones. Once learnt each of the ten abilities can also be upgraded a second time. Unlocking and upgrading these abilities requires Corvo to find special runes.

Finding runes is easiest if you equip the heart which was given to you as it can pinpoint their location. It is also able to whisper secrets to you as well as detect small bone charms. You can equip a limited number of charms at a time to grant Corvo extra passive abilities. He can also carry weapons such as a sword, crossbow and gun. In addition to your special abilities you can upgrade your normal equipment by finding blueprints and spending coins. It’s possible to improve your accuracy and damage with ranged weapons, add zoom abilities to your mask and even enhance your boots to make less noise while moving.

What skills you choose to upgrade is completely up to you and those you choose will determine how you play the game. Our first playthrough we chose to focus on improving our Blink ability as well as Dark Vision and Possession. Dark Vision allows you to see through walls and highlights enemies and things you can interact with. Possession initially lets you take control of animals but after upgrading you can also become other humans too. Other abilities include summoning swarms of rats, slowing down time and calling wind to knock enemies back and destroy structures. The passive abilities can improve your health and regeneration, add brutal fatality moves, enhance agility for jumping and sprinting or turn enemies to ash when killed to prevent their bodies from being discovered.

Dishonored is played from a first-person perspective and there are a variety of ways to play from full-on violence where you kill everyone to fully pacifist stealth where you aim to remain undetected. Most players will try a mix of both styles but your first playthrough will definitely lean more towards the violent route. Once you’ve upgraded more skills and learnt the game you’ll likely aim for stealth which is tougher but far more rewarding. On our first attempt at stealth we accidentally hit our sword on a wall which alerted the guards. Hilariously while trying to escape and leave the guards alive we pressed the wrong button which resulted in a swift decapitation! Another failed attempt shortly after was leaping down onto a guard but missing completely and landing right in front of him.

No matter how you decide to play the best thing about Dishonored is the way it allows you multiple choices at almost every turn. For example around the city are special gates called Wall of Lights which prevent authorised personnel from passing through. You can’t walk through but you could remove the whale oil power source to disable it, find a route across the rooftops to bypass it or even hack the gate which makes it dangerous to previously authorised people.

As you progress your behaviour is monitored using something called the Chaos system. By going for stealth you will aim to keep your Chaos level low but many actions will raise it such as being detected, not hiding bodies well enough or killing enemies. Sneaking around is really tough and you must use a combination of your powers to remain undetected. Dark Vision is incredibly useful as it not only lets you look through walls but it can also show you an enemy’s field of vision. Before opening doors you can also opt to peek through the keyhole to see what is inside.

Instead of killing an enemy you have several options such as moving past them undetected or making them unconscious. Using your possession ability you might take control of a rat and sneak through tiny passages. Your teleport ability allows you to climb and move around above quite easily. If you can sneak up on a guard you can grab them and choke them unconscious and your crossbow even comes with sleep darts to take enemies out at range. The important thing for your Chaos rating is that you move bodies. Failing to do so can end up with other enemies alert and looking for you. It’s also important to put an unconscious person in a safe place so that they don’t get eaten by rats!

Your actions and behaviour also change the world around you and present you with even more choices. If you opt for the violent route it means more corpses which in turn attract more rat swarms and more Weepers. It will also result in more enemies as they bolster their ranks to combat you. The story will change and characters will perceive you differently.

Our best advice for playing Dishonored is to take your time before you act. There are usually more than a couple of choices available to you in every situation. As you come across characters it’s worth pausing to listen in on their conversations which can give you vital clues. Even something as simple as exploring a house you haven’t been in before can turn up a new character and some optional sidequests.

Graphically Dishonored is absolutely stunning to look at with its own unique visual style. The game recommends you install it for optimum performance which took under 5 minutes on our Xbox 360 Slim. The game also boasts a fantastic voice cast so listen out for stars such as Susan Sarandon, Brad Dourif, Carrie Fisher, Lena Headey and Chloë Grace Moretz.

As much as we enjoyed the game there are a few issues. The AI of your enemies can seem inconsistent as sometimes they seem to spot you too easily while other times you don’t understand how you manage to remain undetected. The controls can be a little clumsy if you quickly need access to a power resulting in your getting killed. Unlike many recent games there is no New Game+ mode present to allow you to play through with all your skills intact. Instead you must begin again.

Maybe some of these will be improved in a future patch and we know there are at least three DLC packs coming. Next month (Dec) will see 10 challenge maps added to the game and future DLC plans to extend the story with new missions. It will be interesting to see what additions Arkane come up with.

Dishonored is easily one of the best surprises and most ambitious games of the year. Arkane Studios have crafted a fantastic experience that you can keep coming back to and each time you’ll discover something different. It’s refreshing to play a game that just focuses on single player. If you enjoy stealth gameplay and like to experiment rather than have your hand held then you simply must add Dishonored to your collection.

Greg Ellwoodhttp://www.entertainment-focus.com
Greg is the Deputy Editor of Entertainment Focus. He writes about Games, Tech and TV. You can find him on Xbox/PSN/Steam as Tahllian.
Previous article
Midnight Club devs join Jagex to bring carnage to Facebook
Next article
Painkiller: Hell & Damnation review