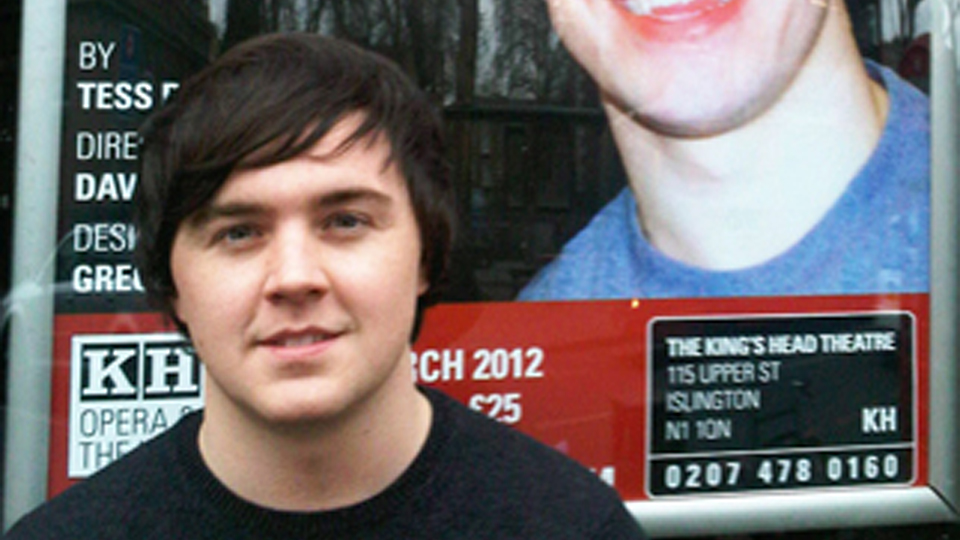 In the light of the quashing of Sam Hallam’s wrongful conviction for murder, the play about his case, Someone To Blame, has three special performances at the King’s Head Theatre in Islington. The show previously ran a few months ago, but writer Tess Berry-Hart has updated it with a new ending, which is now being played for the first time.

A young man Essayas Kassahun dies after being set upon by a gang. A rumour starts that Sam Hallam delivered the fatal blow with a baseball bat. When arrested by police for murder, Sam can’t clearly remember where he was on the night of the attack, but he hopes the truth will emerge when he faces trial. Despite no direct evidence and dubious witness statements, the jury returns a guilty verdict, and Sam’s world is torn apart.

A stage bare save for crates and oil drums becomes a multitude of places as the disturbing story unfolds. Actors interchange between gang members, police officers, solicitors, barristers and judges in this fast-moving re-enactment of a serious miscarriage of justice. Someone To Blame isn’t a fictionalised or skewed representation of the case – the dialogue is lifted directly from interviews, records and written sources, skilfully woven together by Berry-Hart into a shocking, mesmerising play.

It opens with the attack upon Kassahun, where the actors appropriately have their faces concealed behind hoodies and stockings. It’s a graphic way of focussing the audience’s attention on the issue at the heart of the play, and is the only real moment of violence in what quickly becomes a legal drama, with police stations and courtrooms the settings for much of the action.

Robin Crouch plays Sam Hallam with an appealing diffidence and vulnerability. His voice cracking as he recites letters home from behind bars is perfectly pitched and deeply affecting. It’s a visually astute move to leave Crouch seated unlit upstage throughout much of the second act, mute during his incarceration save for his letters. It’s as a constant reminder of his powerlessness and complete invisibility. The only downside to this is that Sam’s story must necessarily be recounted by others, and reportage can be less emotionally engaging than interplay. This is most apparent when Sam’s father kills himself, as within the confines of the drama Hallam is unable to react. This is made up for by a moving reunion of Sam with his mum and friends later on, when he describes how much his world has changed in the years he’s been imprisoned. Debra Baker (who takes on a multitude of parts) makes a strong impression as Hallam’s mum, capturing perfectly her helplessness and despair.

Clare Cameron, currently also starring in Denial, continues to impress in a multitude of parts ranging from the feckless teenage “witness” who claims to have seen Hallam attack Kassahun to Hallam’s hard-edged solicitor. The latter role sees Cameron and Crouch opposite two police officers in an interview room. It’s one of the most memorable scenes in the play, with Cameron’s solicitor refusing to give ground to increasingly belligerent officers, and Crouch reduced to repeating ‘no comment’. It’s a great showcase for Cameron’s incredible versatility as an actor, as she slips seemingly effortlessly between characters often in the space of a few heartbeats.

One of the hardest acting jobs falls to Patrick Knox who plays justice campaigner Paul May. For much of the play he’s isolated at the top of the stage and removed from the action occurring on it. He’s essentially an expositional storyteller until his direct involvement in the case later on. Knox has to tell the audience what’s going on and bring together the disparate strands of the story, and he manages this with a cool and measured performance of quiet dignity that works extremely well juxtaposed with the high emotions centre stage. Arguably, using the character of May to narrate the story is a visible structural hinge, but given the verbatim nature of the dialogue the direct addresses of the actors requires a form of moderation.

The join is in any case oiled by fast intercutting scenes and a dizzying number of costume changes, which gives the piece a feeling of real forward momentum with the brakes off. The direct dialogue and lightening pace marry together to produce sustained dramatic intensity. It doesn’t matter that the audience already knows the story: it’s the telling of it that’s so powerful.

The ensemble cast works efficiently together, with Alexander Gatehouse, Vincent Jerome and Bradley Taylor all having moments to shine as Hallam’s friends, police officers and barristers. Director David Mercatali brings out the best in his actors and presents a pulsating theatrical piece that works in its unremitting focus on the human consequences of a miscarriage of justice.

Someone To Blame emerges as a gripping legal story of police procedure and courtroom drama. It’s the kind of tale that audiences ever-thirsty for crime fiction adore. The difficulties the campaigners face in persuading the Court of Appeal to look at Hallam’s case recalls Bleak House, whilst Hallam’s arrest and subsequent incarceration for a crime he didn’t commit is like something out of Kafka’s The Trial. Yet what’s truly shocking is that this miscarriage of justice really happened and in recent times too. It’s discomfiting for the audience to have to remind themselves that the dramatisation in front of them represents actual events. Someone To Blame, simply by setting out a blow-by-blow account of Hallam’s case, is a devastating exposé of the manifold failures of the justice system, and a consciousness-raiser that no-one can afford to be indifferent.

Someone To Blame is a jaw-dropping story presented as a hugely engrossing piece of social theatre that will haunt you for some time afterwards.