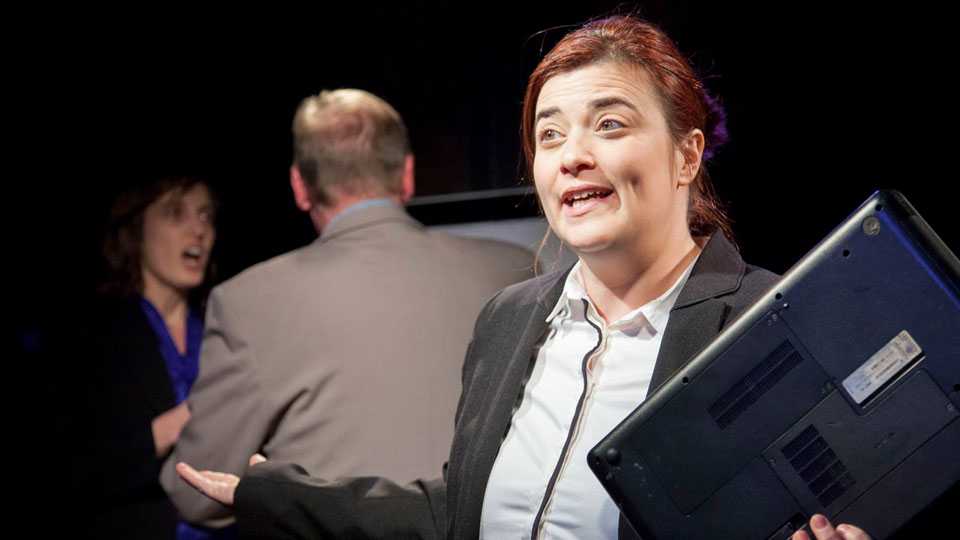 Clare Cameron has impressed us with a diverse range of roles on the London fringe scene. She has starred in productions such as Robert Gillespie’s Love, Question Mark and Portia, a revival of Arnold Wesker’s Denial, Oedipus Retold at the Tristan Bates and Someone to Blame – the powerful true story of Sam Hallam’s wrongful conviction.

Now Clare is set to make her third appearance in JB Shorts – an established feature of the Manchester fringe.

We caught up with her to see what the short play Humble is all about, what her role entails, and how the evening of short plays written by television writers came to be.

Tell us about JB Shorts. What’s it all about?

It’s an evening of six fifteen-minute plays written by TV writers. It’s been going since 2009 and it happens twice a year in Manchester. It’s a bastion of the Manchester fringe. It attracts all sorts of talent in terms of directors, writers and actors: it’s theatre in a cellar with beer – it’s brilliant!

It sort of is. Joshua Brooks is a lovely pub, and downstairs is what’s normally a nightclub from ten o’clock onwards; but prior to that it’s quite often used for fringe shows, and that’s where we play.

Can audiences take drinks in?

Very much so – there’s a bar in the space.

You’re forced from your seat to the bar in the interval, so…

Sounds terrific! Is there an overall theme or subject matter for the evening, or are the plays self-contained?

They are completely diverse. I think we’ve covered everything over the years from tea pot-collecting to Lady Gaga, to female orgasms; and the more mundane, such as office meetings, which is the subject of Humble, the play I’m performing in this time around.

So all of the plays are written by TV writers?

Yes, that’s the criterion. So you have top quality writing, and they’re very strict on a fifteen-minute duration each to keep the evening running on time, which is one of the challenges. It’s a range of comedy and drama.

Is the audience given a breather in between the plays?

There are three back-to-back, and then an interval, followed by the next three. It’s a relatively short evening of theatre. It kicks off at seven and it’s all done by nine, at which time everyone decamps upstairs for more drinks and post-show chatter.

It’s a show that tends to sell out. What sort of audiences go for it?

A real array – there’s no particular demographic. We’ve had people travel from far afield to come and see us. As long as they’re over eighteen – that’s the only thing – as it takes place in a pub/club. It has a universal appeal, though.

That’s the way it should be.

That’s part of the success of the format. As you have short plays, and each one is individual and covering different topics, with different casts and director – if you don’t like one – it’s only fifteen minutes and it’s gone and you’re on to the next one!

Tell us about Humble, which is the one you’re involved in.

It’s written by Peter Kerry, who is an Emmerdale writer, and directed by Chris Honer, who was artistic director of the Library Theatre. It’s a very familiar setting for most people: an office meeting. It’s a comedy, and we have Will Travis in it, Rachel Priest, Ethan Holmes and me. The dynamic is hilarious. It’s terrifically well-written. There’s a lot of office politics and tension there, shall we say! I don’t want to spoil it by saying any more.

Yeah, but rather a different style of humour, but many people will recognise the day-to-day minutiae and the aggravation of working alongside certain people!

So anyone who’s ever worked in an office will enjoy it, but find their toes curling, perhaps?

Which character are you playing?

I’m Karin, who’s the very keen character who produces a lot of extra work and who wants to work her way up. That’s all I’m going to say on the matter!

Maybe I’ll just ask if you’re finding the character is coming to you naturally.

I did have a moment at the end of the audition where Peter was explaining the inspiration of the character, who was a person who always sends the extra reports over and doesn’t realise that in doing so, she’s just making more work for everyone, and she wants everything to be efficient. I’ve had moments of thinking, “Oh god – I think that’s actually me…” (Laughs) I used to temp, and as a temp you always have to prove yourself and stay ahead of the game and make sure you have work for the next week.

Absolutely, yes. Being in an office is a game of survival.

And the weird thing about being a temp is that you go in as an outsider and you have to ingratiate yourself with your peers and the boss. There’s a whole different set of dynamics in itself.

It sounds like the writer Peter Kerry is involved in the production process. Is that the case?

Yes, and it’s always great to have the writer in the room.  And his son, Louie, has produced some music for it too. There’s a dance interlude which he’s composed.

Chris is terrific and a dream to work with. He was the artistic director at the Library Theatre for many years and won a Special Achievement Award last year at the Manchester Theatre Awards. But he makes it a fun rehearsal room to be in – and there’s much hilarity!

You obviously enjoy JB Shorts, having been involved with it before. It sounds like you played quite an interesting character in a Carol Solazzo piece. Can you tell us about that?

The play was called Good Vibrations, and Carole was inspired to write it having heard a radio discussion piece in which they were talking about female sexual satisfaction, and there were women who hadn’t ever had an orgasm! Carole was intrigued and did some research, and wrote this piece which was stylised and non-naturalistic, about a woman who had never had an orgasm with her partner, or indeed at all. The play included Aretaeus – a Greek scholar who came up with the idea that a woman’s womb is the seat of all hysteria and it needs to be remedied by manual stimulation with oil. It also included a doctor in 1863 who’d invented the Chattanooga, which is in essence a very large, industrial, mechanical machine, the purpose of which is to pleasure women. Then there was the housewife’s helper…

Well, we all need a helping hand sometimes.

Exactly! So Good Vibrations was another high-spirited, hijinks play. It was directed by Joyce Branagh, who is a wonderful director and actress. It was a joy to be part of.

That was your baptism into JB Shorts?

That was my second. For the first one I was playing a teacher in a piece called Break. It was set in a staff room during the break, and it was me and a fellow teacher. He starts to realise that a student may well be his daughter. It was another comedy.

It sounds a fascinating evening. It’s an interesting discipline, the fifteen-minute play. It’s not as easy as it sounds. The timing has to be very precise.

Yes, and the rehearsal process too requires certain qualities because there’s so little rehearsal. It’s about finding the right balance between being rehearsed well enough to go on stage and do it, and being over-rehearsed. Chris has been great at directing and shaping that and ensuring that we’re sticking to the script as written. It’s a learning curve, but a joyous one.

We love the sound of it, and it promises to be a terrific night out.

It always has been, and this one will be too. It does tend to sell out quickly and is very well-known. I’m very excited to be in this one, because I’ve had time off to have a baby, so this is a great job to be coming back with!

We wish you every success with your return to the stage with Humble. Thank you for talking to us, Clare.

You can catch Clare Cameron in JB Shorts at Joshua Brooks in Manchester from April 5th to 16th at 7pm (excluding Sunday 10th), with a 3pm matinee on Saturday 16th. Full details are at www.jbshorts.co.uk and you can book tickets now through wegottickets.com/jbshorts.