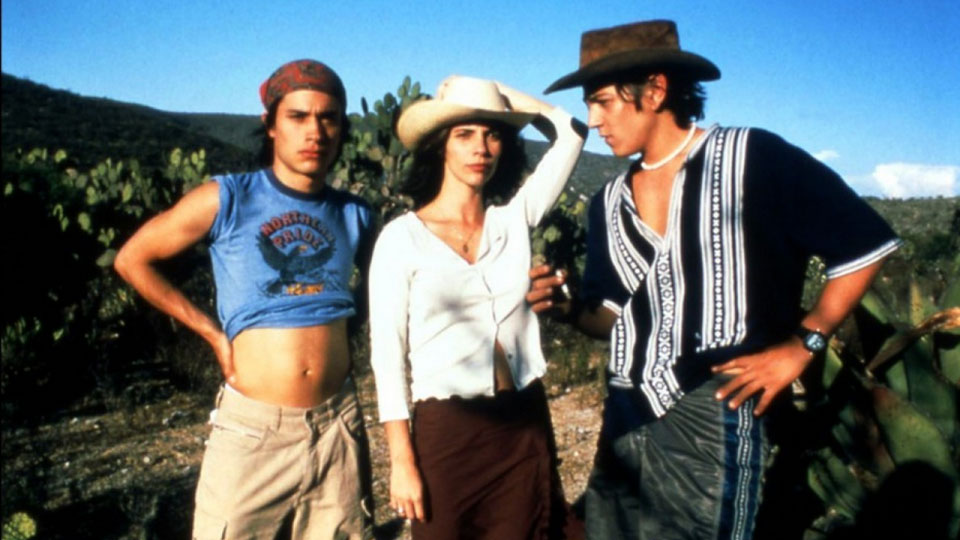 Have you ever been on a road trip with your closest friend? Did you feel like you would be inseparable? Did you think running around town with your friend was the greatest time ever in your life? Laughing and joking – you were immortal in the grand scheme of life. Y Tu Mama Tambien is the the film for you.

Released in 2001, this Mexican comedy drama didn’t exactly set the worldwide box office alight. It did very well in its native Mexico, over $2 million in its first weekend, but it struggled to find an audience. It was nominated for several awards, including an Oscar and Golden Globe, but still people didn’t see it. This movie only started to gain a following upon release on VHS/DVD via word of mouth and being quite controversial in its depiction of the sex scenes.

The story for Y Tu Mama Tambien has been told before but is incredibly timeless. Julio (Gael Garcia Bernal – The Science Of Sleep) and Tenoch (Diego Luna – The Terminal) are two teenage boys looking to have fun during their holidays. They meet Luisa (Maribel Verdu – Pan’s Labyrinth) and ask if she would like to go on a road trip with them to find a secret beach called Boca Del Cielo. On their road trip Luisa explains she found out her husband was cheating on her and that this is her escape from him.

The boys discuss sex, life, friendship and more with Luisa during the film. Luisa has sex with Tenoch and then a few nights later with Julio. Eventually they arrive at the beach and enjoy the day by the sea, during the evening they move to a local tavern to drink and dance. The night ends with all three of them having sex. The boys leave the next day, but leave Luisa at the beach as she wants to explore the local area. It’s very rare to have a film that is targeted for men but doesn’t have any macho action. This movie plays best to men of a certain age that did the road trip or always wanted to; of course it helps to imagine you had a sexy lady with you along for the ride. You watch and imagine yourself along with your best mate from school being Julio and Tenoch for 105 minutes, the type of stuff you use to get up to many years ago being beautifully played out on the screen.

Alfonso Cuaron (Harry Potter and the Prisoner Of Azkaban) doesn’t really need to direct, he lets the film play out amongst the three fantastic lead actors. Cuaron shoots it beautifully, giving long lingering shots on elements not vital to the storyline but feel important in that moment. Maribel Verdu is great as Luisa and smoking hot throughout the film; she gives it all a sultry edge. But the stars of the film are the two lead actors – Gael Garcia Bernal and Diego Luna – they steal every scene they are in together. They make you feel like they are best mates and not just acting.

I have to give special mention the scene where the boys fight each other as it’s eerily reminiscent of teenage boys fighting and then giving up. The final scene of the boys together is one of the most heartbreaking in modern storytelling. At one point or another we have all been there, not that we knew it at the time but you look back on that moment and realise what it represented. One of the main talking points of the film is the sex scenes.

Whilst it’s nothing that hasn’t been seen before it’s the use of attitude and the controversial depiction of a woman taking advantage of inexperienced boys. This caused problems getting rating certificates in different countries. Recently it has been re-released as uncut in nearly all countries; as such this has negated the need for a certificate in countries that previously had a problem with the film. Renowned US film critic Roger Ebert referred to it best as “One of those movies where after that summer, nothing would ever be the same again”. Y Tu Mama Tambien is a classic modern foreign language film.