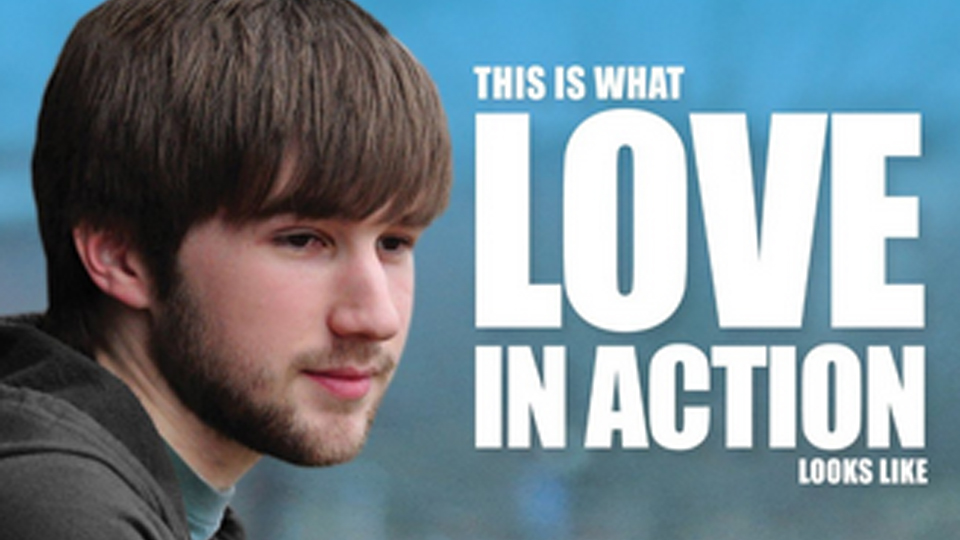 This Is What Love In Action Looks Like is an extraordinary documentary film about a teenager who became caught up in the Christian program Love In Action – an “ex-gay” camp in the US which claims to convert gay people into heterosexuals in exchange for dollars. It operates under the premise that homosexuality is an “addiction” that can be “cured” by conditioning homosexuals to equate their same-sex attraction with shame and humiliation. Operating since the 1970s, this financially lucrative enterprise opened a summer camp called ‘Refuge’ designedly for teenagers. Not all the teens who crossed their threshold were willing participants…

When sixteen year-old Memphis-resident Zach Stark came out in 2005, his devout Christian parents didn’t take the news well. Under the belief that there was something wrong with their son that needed to be fixed, Zach’s bags were promptly packed and he was sent to Love In Action for eight weeks to be “straightened out”. Lonely, confused and depressed, Zach posted his thoughts on his MySpace blog in the days leading up to his internment, little realising that his lost voice would ignite a firestorm of protest that garnered national press interest and fuelled the debate on the rights of children versus the rights of their parents. This Is What Love In Action Looks Like documents Zach’s story and the media frenzy surrounding it, with contributions from other Love In Action survivors.

There are a few topics explored in This Is What Love In Action Looks Like. Primarily, it’s an exposé on the religiously-inspired practice of “reparative therapy”, a dangerous fraud perpetrated by the religious right upon the credulous. “Pray away the gay” is their agenda put most concisely. The documentary also comments on the power of social media and the speed with which things can “go viral”. Finally, it’s also about the power of peaceful and intelligent protest in bringing about wholesale societal change.

Whilst Zach is incarcerated, his teenage friends organize a protest.  Hearing about it, documentary filmmaker Morgan Jon Fox went along with his cameras. When word spreads, the protestors garner huge support until there are daily vigils outside Love In Action’s Memphis headquarters, with supporters shouting words of encouragement to Zach and to the other teenagers held against their wills behind the institution’s walls. From there it’s only a matter of time before the national press takes an interest, and director Morgan Jon Fox does a great job of allowing the stories behind each of the threads to evolve with a natural sense of forward progression.

Whilst the issue of the film is the immorality of forcing children to be subjected to emotional abuse, the testament from the (willing at the time of “therapy”) adult survivors such as Peterson Toscano, also offers unique insights into this strange world. The inmates (likening it to a prison sentence is the closest allusion) have their personal possessions rifled through, and anything on the gay list – a musical CD for example – is compounded for their own good. Inside Love In Action, they are monitored 24/7 to ensure there’s no exposure to gayness, and even their physical behaviour is policed (crossing legs is strictly prohibited). Whilst inside, they have no access to the outside world. It’s credit to the survivors that they’re able to talk about such invasive and draconian policies with a healthy dose of ironic humour.

Given that the religious are becoming ever more extreme and that “reparative therapy” is reaching other shores, including the UK (former Archbishop of Canterbury George Carey and Catholic former-Tory MP Ann Widdecombe have both recently spoken out in favour of the “therapy” in national right-wing newspapers) the truth about this fraudulent and abusive practice needs to be heard more urgently than ever before. As such, This Is What Love In Action Looks Like deserves as wide an audience as possible. Only when people are armed with knowledge are they empowered to act, and this film achieves precisely that, laying out the facts surrounding the organisations that can’t deliver on their promise, but tell vulnerable parents what they want to hear. You need no qualifications to practice this “therapy”, only gullible people will money to spare.

Tellingly, nobody from the religious right, the people responsible for the “ex-gay” industry and the dissemination of lies that powers it, agreed to be interviewed for the film. Since it’s remarkably temperate and relies on concise presentation of facts to make its case, the religious are represented mainly by pre-recorded inserts borrowed from other sources such as television interviews. Nor is there any footage of what actually goes on behind the closed doors of these institutions, though the “ex-gay” survivors offer vivid insights. Despite that, This Is What Love In Action Looks Like is anything but an angry film, and it’s never at any time critical of religion or religious belief. It’s tightly focussed on the dangerous ideology that human sexuality can be changed, and lays out the facts for people of any faith and none, exposing a financially-motivated fraudulent industry that preys on vulnerable people.

Even though it’s an objective documentary, the emotive subject matter will arouse deep feelings in viewers, not least through the extraordinary journey of John Smid, the director of Love In Action up until 2008 and the man in charge during Zach’s stay. You suspect throughout the movie that his willingness to be interviewed and to offer up full and honest answers must be motivated through some sense of remorse for his part in the “ex-gay” industry, but the full story that emerges is truly astounding and has to be seen to be believed. It’s a direct testament to the ability of the protestors to open minds to peaceful and reasoned persuasion, and it’s through Smid that the various strands of the documentary unite in a highly satisfying conclusion.

Sadly, despite the positive outcome of the movie and the empirical proof that the practice is fraudulent, and that it’s not possible to change someone’s sexuality, no amount of proof will be enough for religious fundamentalists. This film will act as an eye-opener to moderate religionists who will be empowered to challenge the more reactionary branches of their denominations, and it will also clarify the issue in the minds of those already equipped to challenge it. This Is What Love In Action Looks Like is punchy and powerful, and draws you in with a beautifully told human story.