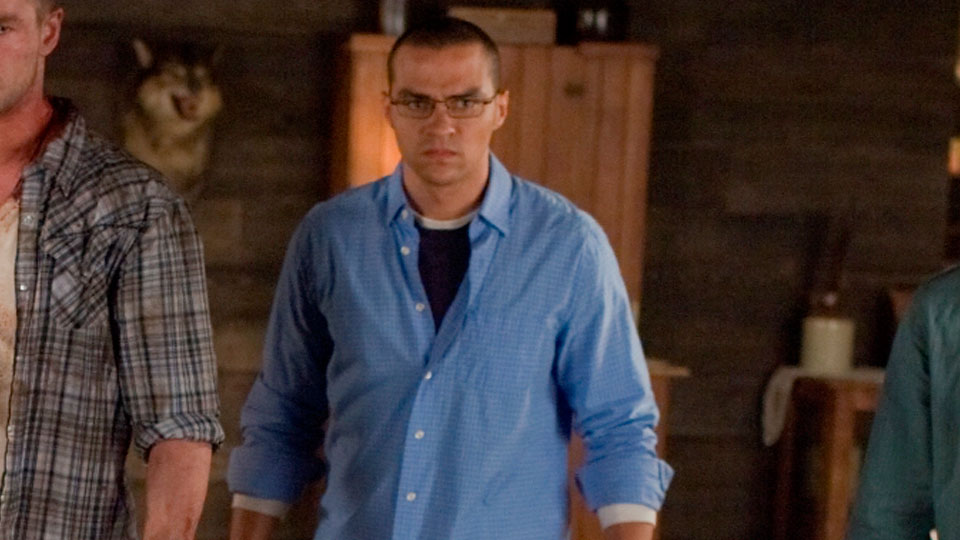 Jesse Williams is best-known across the world as the rather dreamy Dr Jackson Avery on the hit ABC show Grey’s Anatomy.

Now Jesse is preparing to show a different side of his abilities in new horror movie The Cabin In The Woods written by Joss Whedon and Drew Goddard.

Whilst he was in London recently we caught up with him to talk about the movie, find out more about his early career and talk about how he got involved in the project.

Have you been to London before?

I was here for two weeks last summer. I did a press tour for Grey’s Anatomy here but I’ve only been here for about three weeks total as an adult. I’ve got a bunch of friends here now so I’m getting to see the city a little bit. I’m getting there…I’m figuring it out.

Do you think this film will do to cabin films what ‘Scream’ did to the slasher genre?

It’s hard to say right now as it hasn’t even come out yet. We’ve seen it in a couple of theatres with people watching it. If it makes an impact then people will make reference to it so therefore it’s going to have a lasting effect. We’ll start with one and see if the math continues down the road.

There’s a lot of anxiety from audiences about the film being spoiled before they get chance to see it. How would you describe the film without giving anything away?

The word ‘spoiler’ has lost it’s meaning. Some people mean ‘don’t spoil the end of some sitcom that doesn’t really matter’ when it’s little pieces of a story that’s not a deal breaker. With this, audiences who have seen it are coming out and saying ‘we don’t want to not spoil it for the sake of the director or writer or the actors, we don’t want to spoil it for the audience. We want you to have the best experience possible’. Just throw back to before Twitter and the information age before it was fun to show off and flex how much you know. Less is more. The first thing about The Cabin In The Woods is don’t talk about The Cabin In The Woods.

Have you ever considered doing a role with a little less blood?

I dabbled in the non-blood genre early on (laughs) in my acting career and it just wasn’t as satisfying. I mix it up. Sometimes I do blood with gloves, and sometimes without – sterile and non-sterile – inside and outside an institution. I’m mixing it up. Can I possibly do another film near this genre again? I don’t know because Cabin has destroyed that because it’s so good and it’s so awesome. The bar is set very high.

Do you find you wash the blood off like you’ve come out of surgery?

I do yes (laughs). There’s something about having blood on you. It happens on Grey’s too after doing a long surgery or spending hours covered in blood in the woods in Vancouver when it’s done you feel very accomplished. You’re scrubbing it off like ‘hell yeah’

You started off in academia then moved into acting. Was that always your plan?

No. There was no plan. I was a public school teacher but film was one of my majors in college. I was writing films, shooting student films and going back and forth between Philadelphia and New York to shoot films with NYC and Columbia students. I wrote a film that I submitted to Sundance and it made the finals whilst I was teaching.

It made it real and I thought ‘maybe I could do this’. It made the goal feel realised rather than just throwing it out into the ether. That motivated me to go to New York and try to pursue my creative goals before I wake up and 40 years have passed and I’m yelling at teenagers still. I moved to New York and tried writing. I kicked around odd jobs and boring stuff – I worked in a law firm for a year and a half – and I dug up this old agent I’d do a few commercials with in college. I said ‘I’m here now and I want to give it a shot. I don’t know what I’m doing and I’m having a quarter-life crisis’. He sent me on an audition for Law & Order and I started acting.

You mentioned writing just now. Is that something you want to keep on doing?

Yeah. I’m doing some writing now an working on a couple of projects. I’m co-producing a film after we finish this season of Grey’s. I’m just trying to figure out ways of being creative and to use my time. I do one show 10 months a year – I love the show and I love my job – but you want to branch out. I produced a project that was out at Sundance this year and I just to try mix it up a little bit so I don’t go insane.

What attracted you to ‘The Cabin In The Woods’ in the first place?

A couple of things. First it was the material. You can be reading six scripts a week looking for work and desperately trying to find a place for yourself in some of these screenplays and this just stood out to me. We didn’t even get a full screenplay, we just got audition size – a couple of sets here, a few pages there – things that they had cooked up that they had no intention of putting into the film. They just wrote these really elaborate crazy monsters – I had a molesting Jacuzzi in one scene – and you have to act this out in a little office space. I was in New York at the time and you often have to send it on tape to Los Angeles so you don’t get the feel of working with another person, you just have to put it together. On top of that I had to be sexually assaulted by a Jacuzzi (laughs) in an office. I felt like I was going to be on Candid Camera.

What I loved about it was that it was very appealing to me and the voice was very clear but I couldn’t put my finger on what it was. It’s hilarious but it’s terrifying but there are monsters and the imagination is making it so that I can’t even tell if this is the real world. It was really genre-bending and really engaging. The voice was just so clear to me that I didn’t feel it was forcing itself. It’s not a comedy that’s trying to scare you. It’s not a scary movie that’s trying to get a couple of laughs in to break the tension. It’s all of these things in a really honest way.

Once I came out to Los Angeles and met with these guys (Drew Goddard and Joss Whedon) and we worked it you could just feel in the air how excited and how passionate they were about it. We got on really well I thought as we were building this thing together. It’s not common for everyone to be this genuinely excited. This is a world of remakes, sequels and 3D; all of these different tricks. In horror movies now you put a girl in a high school and have her shirt ripped-off and things like that are done to death. This is just original and it’s really nice to have an original story that has room for the characters to grow and change, and play a guy (Holden) who’s square – and different to what I’d just done on Brooklyn’s Finest playing a cop – this was something different. It’s a guy who’s two different people and new to a group. He’s socially awkward and sexually frustrated and that was fun.

The complete opposite of your ‘Grey’s’ character Jackson then?

You mentioned before about ‘Grey’s’ taking up 10 months of the year. Is your plan to balance ‘Grey’s’ with film work?

It’s very difficult to balance that with films. You’re not available to do much of anything. It would be a pain in the ass for a studio to try and make that happen and fight with the network to make that happen. That’s the business side of it. It’s the gift and the curse. One job could prevent you from getting another job but 7% of actors work so I’m very grateful to be amongst those that work and I’m not complaining. It’s a balancing act for sure.

The five characters in the movie are very stereotypical. Which one would you be?

Erm…I was somewhere between Marty and Kurt. If you think back to that time I was an athlete and a wannabe tough guy but I was like 90lbs. I was not Holden that’s for sure.

“Grey’s Anatomy” – when does Season 18 start on Sky Witness?