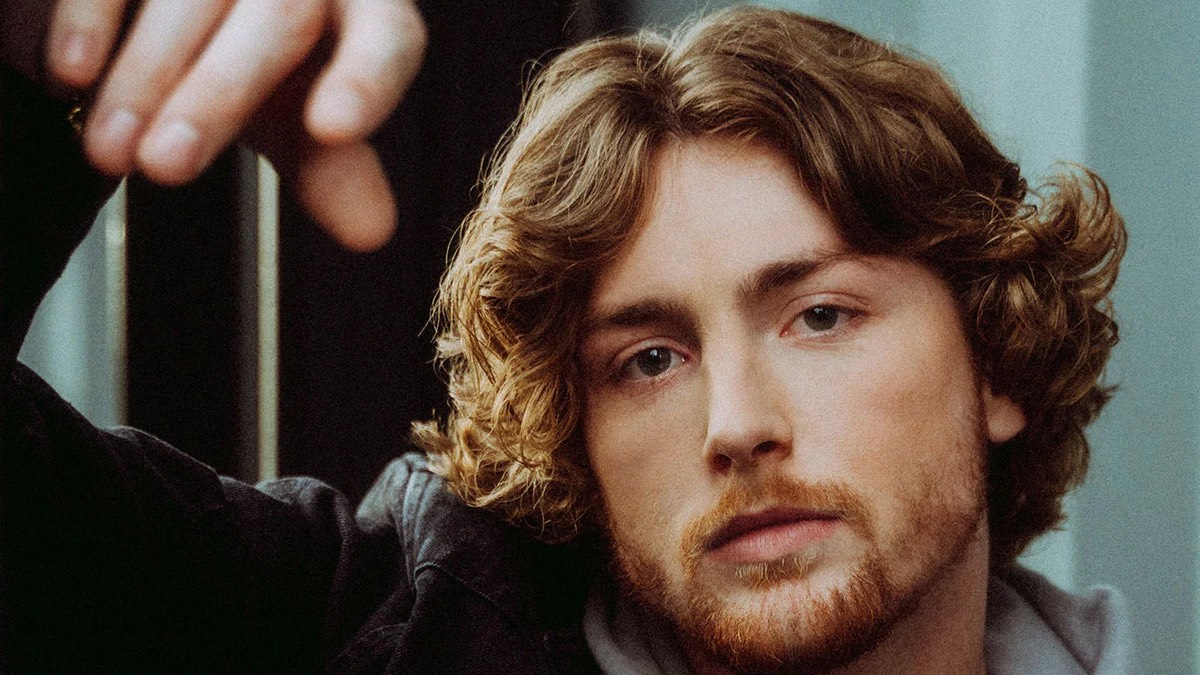 As far as origin stories go, you would need the best staff writers at Disney or Marvel to come up with the one that happened to Bailey Zimmerman. Currently sitting at number 4 in the charts with ‘Fall in Love’, Zimmerman hadn’t ever sung three years ago! He was working in the pipeline industry and pimping trucks on an embryonic TikTok. Smash-cut to now and he has the world at his feet. A single destined for number one, a new EP ‘Leave a Light On’ full of emotional, angst-ridden, Rock-influenced Country music and a wide open slate for the future. We were thrilled to grab some time with him to talk all about it.

Thank you for your time today, Bailey, it’s lovely to touch base with you.

Of course, dude, thank you for taking the time to talk.

You have one of the most unique origin stories of any artist in terms of your background and how quickly you’ve exploded onto the scene. When did you first realise you could sing?

So it was December of 2020! Just a couple of years ago right around now, I guess! Crazy.

A lot of artists in Nashville have been through talent shows, reality TV or music programs. You have a background working in the pipeline industry and cars, engines and trucks. What was it that drew you to singing?

I just tried one day! I was building a lifted truck and was waiting on some parts from out of the shop. I started singing a Black Stone Cherry song called ‘Stay’ in the garage and I thought it sounded really cool. It sounded like the record, you know, so I uploaded it to Snapchat.

I got loads of feedback from that, including a dude who was really interested in writing a song with me, which I thought was so cool. I’d never seen anyone play guitar or sing at the same time! (laughing) We got together and two weeks later we wrote our first song, it blew up and I quit my job! (laughing)

What do your old buddies in the pipeline industry or the truck business think about what’s happened to you?

Oh man, they’re, like, ‘Holy crap, man, this is crazy!’ (laughing) I’m in touch with a lot of those dudes and they can’t believe that I have a song on the radio now.

Have they all started playing guitar now?

A couple of them have, yeah! (laughing)

TikTok has also been an important part in the jigsaw of your success. What was it about the content and the style of your videos that became so wildly popular so quickly on TikTok do you think?

Man, I don’t really know. That’s a question for the universe right there. Every person who uses TikTok would love to know that! I just started doing it around the trucks and customising them and it was just me, making videos every day. When one would blow up with my truck stuff I would love to watch the numbers going up.

Then when I started singing, even just after I’d posted the first song, everything just blew up. People were, like, ‘Dude, I have no idea that you sing,’ and I was very honest and said that I didn’t either and that I had no idea what was going on! (laughing) I still haven’t got a clue what is going on!

What is it about your friendship with Gavin Lucas? Tell me why the two of you work so well together. (Gavin is the guy who hit Bailey up on Snapchat and suggested they write a song together)

Man, we’re just small-town, you know? We have kinda the same thoughts on everything and we’re like brothers. Right off the bat, when we started writing our very first song I wanted him to quit his job and come live with me in Nashville. I don’t think our relationship will ever change – it’s so supportive, going into a room with someone who has your back, you know? He knows all the darkest parts of me and all the crazy. When someone knows you for you, you can write crazy songs.

Gav knows who I am and he can put that into music and words.

So, when he gets his first cut with Morgan Wallen or Blake Shelton are you going to be jealous?

(laughing) I hope I’m on it as well!! I’m very excited for his career, the kid is a crazy writer. I’ve heard some of the songs he’s written by himself and they are really cool. He’s really locking in to who he wants to be as a writer and how he wants things to sound.

I can hear a real 90s Rock edge to your vocals that reminds me of bands like Nickelback, Creed and Hinder. It’s what makes you special and is your USP in a genre where a lot of the guys all sound the same. What influences has Rock music had on your life?

Truthfully, a huge amount. I started out listening to Rock music from an early age. My mom introduced me to artists like Kid Rock and Sheryl Crow when they did ‘Picture’, which was one of the first songs I ever identified with. I loved that Southern Rock vibe.

She then put me on to Hard Rock bands like Tesla, who I love! They were the first band I ever saw in concert. Nickelback and Hinder came along when I was, like 10, 11, 12 years old. I then got into Eminem and stuff like that in my teenage years but Rock music is what I grew up on.

I just listen to music all the time, man. 24-7. When we’re writing I have this drive to make something fresh, to make something new and something that I haven’t heard a million times. I want my music to be different and not something you’ve heard before. I want them to be my melodies and my words and I really focus on that.

Nashville is often referred to as a ‘ten year town’ as there are songwriters and artists who have been working there in rounds and small rooms trying to ‘make it’ for that long. Do you ever get any kickback from your fellow musicians about the way you’ve crashed into the town and the genre or are people supportive of the way you’ve done things?

I was really nervous about that happening, you know? I was 21 when I moved to Nashville. I’d had a couple of big songs on TikTok but that meant that I didn’t have to do things the way everyone else had. I didn’t have to go play the bars and I was nervous that people wouldn’t accept me because I hadn’t done things in the ‘normal’ way but, dude, everyone has been so kind, so bad-ass.

Let’s dig into ‘Leave a Light On’ a little then. How did you come to settle on that as the title? A lot of the songs on the album are quite emotional and angst-ridden. Does that reflect who you are or are you a secret party boy in real life?

That’s a cool question, man, I’ve never been asked that before. I partied so much when I was around 16, 17, 18 years old, right? It plays into the title of the EP as well. I went to my first party at this place called ‘The Cabin’ back in Fairfield, Illinois. I’d never been to a party and drank before so I ended up getting real drunk and I called my mom and she said, ‘If you decide to come home tonight I’ll leave the light on for you.’ She said it, from then, every time I went out so when we were thinking about the title for the EP I came up with that as it kinda portrays who I am and what I stand for – that idea of always having somewhere to go to and never being let down or abandoned.

I also partied a lot around Morgantown in West Virginia and I kinda got burnt out on it so nowadays you’ll just catch me sitting on the bus, chilling, having a good time with the guys and girls but I’m not a huge ‘throw-downer’ anymore. I like to hang out and talk to people but bars are very rare these days! (laughing)

A lot of the songs and lyrics on ‘Leave a Light On’ are very dramatic. I think my favourite lyrics come in ‘Fall in Love’ – the ‘smoke ring, wrapped around your finger’ part. Do you have a favourite line, bridge or chorus from the EP?

I love ‘Rock and a Hard Place’. That line that goes ‘For the record, shit,
throwin’ in the towel takes some effort, so I’d rather ride it out for better weather.’ That is one of my favourite lines. That sentiment is so true, man. Throwing in the towel takes more effort than actually working on a relationship sometimes.

My other favourite part of the EP is the very end of ‘House on Fire’. That vocal on there is really, really cool. I don’t know where that comes from, that sort of crazy, cackling vocal there but I love singing that live.

‘Trainwreck’ lists Morgan Wallen as a co-writer. Tell me about that.

So, I didn’t get to write that with Morgan, he’d already written it, it was kinda like a graveyard song, you know? Me, Gavin and Sergio Sanchez were grave-yarding around with some old songs one night. Sergio, who was Morgan’s vocal coach and now is mine, found it and said that he would text Morgan to see if he minded us messing around with it a little.

We re-wrote it and texted Morgan for his permission. Morgan had the initial melody that we loved, such a cool melody and we added our bits into it. It’s become one of my favourite songs to sing, I love that song.

Let’s wrap up by congratulating you, in advance, on what is looking like your first number one with ‘Fall in Love’. It’s currently sitting at number four in the charts and rising. How will you celebrate? What’s the plan?

Thanks, we’re really exited, man. I always said, from day one, that if I get a number one I’ll go out and buy a Corvette, that’s my dream. We might have a few beers to celebrate but that would be the dream, right, to just go and ride around in my new Corvette! (laughing)

Hope you enjoy that and we hope to see you over in the UK sometime next year in 2023 too.

Thank you and for sure, I’m coming over next year and I cannot wait for that! I came over for a quick visit recently and I’m definitely coming back!!!