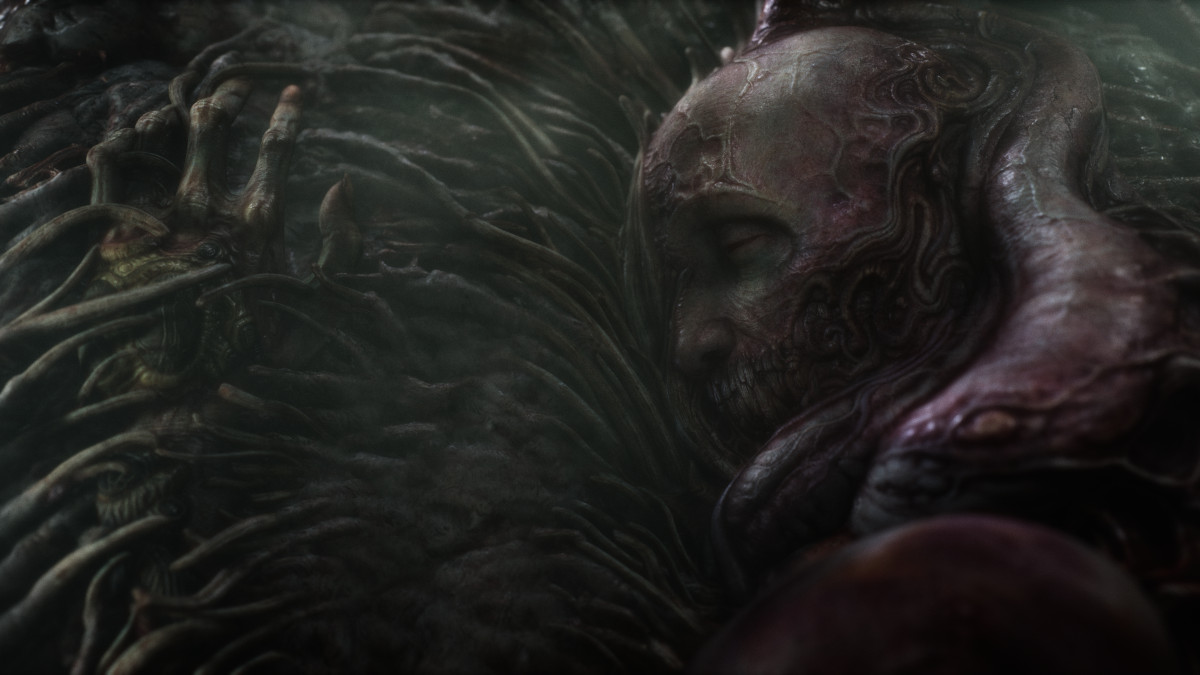 While Scorn may have started its life in 2014 when Serbian Studio, Ebb Software, revealed test footage for the game, I (along with the rest of the world) only really learned about it in the Xbox showcase of 2020. Sandwiched between the atypical games we’ve seen a thousand times over was this macabre, twisted and explicit horror title. After a couple of delays (the pandemic strikes once more), Scorn is out. What is this game? The devs have been very quiet and with a striking art motif, I’m certainly intrigued to see what Ebb Software have gifted us.

All you need to know about the plot of Scorn is, you’re a thing that wakes up somewhere and has to get to somewhere else. That’s not me being lazy or reductive…that’s it. Okay, I’ll embellish slightly. You are some form of twisted humanoid who wakes up in some kind of facility and something presses you forward. Freedom? Curiosity? Revenge? No idea. Even when the game (suddenly) ends, I just shrugged at my lack of knowledge or connection. Right, so, Scorn isn’t here to tell us a captivating story, not a problem, let’s move on.

Well, what the HELL is Scorn? It’s part walking simulator, part puzzle game and part first person shooter. Let’s tackle the one people are excited about, the first person shooter part of the game. Pick up your hype and drop it in the bin, because the FPS angle of this game is awful. You have a couple of weapons that handle extremely poorly and there’s no way to really dodge enemies outside of running around in a circle and hoping you don’t get hit. Enemies take a lot of hits to go down and ammo is in extremely short supply. There’s no real feedback to combat and the only advice is to bolt it past the enemies and hope they don’t wipe you out. This is your first reminder that this is not an FPS game, but is it a puzzle game?

Yes, is the answer to that. But is it a good puzzle game? Not really. As you explore this facility, the bulk of your time will be spent flipping switches and turning things on, These translate as small and large form puzzles. Now, they’re not bad by any means but they are really obtuse. When coupled with the art design it can be hard to know what you’re actually doing and while that kind of works, it doesn’t help that said puzzles aren’t interesting, nor are they difficult. They just exist as a way to keep pushing you forward, and as you may have gathered through the plot section, there’s no real desire to actually progress.

Scorn is at its strongest when it’s a walking simulator. This game is absolutely beautiful. Well it’s not, but it is. Okay, I’ll explain. The game is heavily inspired by the artwork of H.R. Giger (Who designed the Xenomorph from Alien), and Polish artist Zdzislaw Besinski (Who was the inspiration for games like Lust For Darkness, The Medium and Returnal). While I’m not familiar with Besinski’s work, a lot us will know Giger’s. The world of Scorn is designed like everything could be a living organism, the very walls themselves look like a mixture of bones and tissue and there’s an undeniable sexual element to the design. Lust For Darkness, Agony and Succubus followed the sexual explicitness of Giger’s work, but Scorn is very careful how it uses it and wisely opts for disgusting instead of titillating. This is the most ‘enjoyable’ part of Scorn, seeing what horrors are around every corner and as far as my time with the game went, were the only scraps of enjoyment I got.

As I’ve just stated, the art design on show is simply phenomenal and the sound design is great too. Oddly enough the lack of a real score leaves moments of absolute silence, not even the sound of footsteps. It’s a weird choice, it only affects the beginning of the game and some music starts to be introduced, it didn’t work for me but that’s subjective. Playing on PC, I got a very stable 4K/60 with a couple of expected Unreal Engine 4 dips that didn’t affect my enjoyment of the game. A horrendous checkpoint system did, forcing me to start an entire chapter again, so be very careful.

How do I sum this up? There’s no story, there doesn’t actually need to be but I would have appreciated a little bit more. The combat needed to be scrapped completely and while the puzzles weren’t exciting, they did their job. But Scorn does, what I think, it set out to do. Give you a series of paintings to ogle and marvel at. In that regard, Scorn does a great job. I can certainly appreciate an artistic walking simulator and I look at games like SOMA, that had a poor combat system and removed it entirely, and the game was far better because of it. For other gamers who thrive on more engaging systems, I don’t think you’ll get a lot out of this to be honest. I was reminded of two excellent titles as I played, Alien: Isolation and Prey (2017), that might float your boat a bit more. So, yeah, I get it Scorn but it didn’t quite work for me.