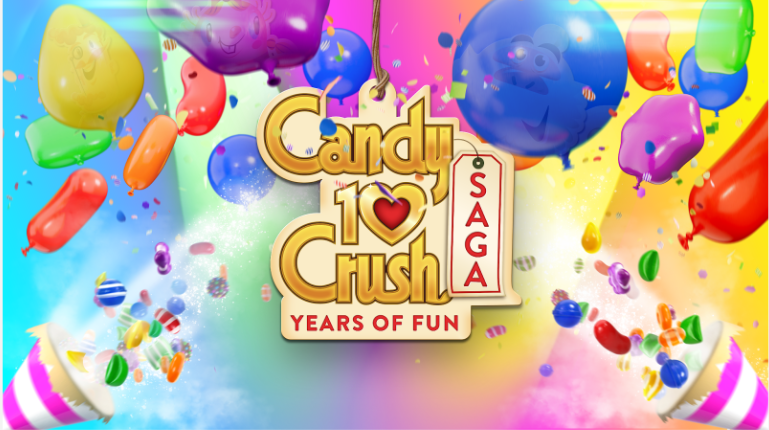 Candy Crush Saga is the most installed mobile game in the world with over three billion downloads since its release in 2012. The game often has millions of concurrent players and is cited as one of the free-to-play business model pioneers. The game’s success has also spawned several spin-offs in the form of Candy Crush Soda Saga, Candy Crush Jelly Saga and Candy Crush Friends Saga.

Celebrations have been varied but highlights include a drone show over New York City where a fleet of 500 drones performed a stunning Candy Crush themed light show and the one-off special episode of Candy Cave featuring many heavy hitting content creators.

The story so far for Candy Crush has clearly been very successful, but with Candy Crush developer King Games recently being bought by Activision Blizzard in a deal worth $5.9 billion, fans are wondering what the future may hold.

“Over the past ten years, Candy Crush Saga has become a cultural phenomenon that brings joy every day to millions,” said Bobby Kotick, Chief Executive Officer at Activision Blizzard. “None of this would be possible without our exceptional team and our dedicated players, who made this the iconic game it is today. I can’t wait to experience what the next decade of Candy Crush holds for the world.”

The developers plan to do a full brand refresh of the iconic game adding a new orchestral score and a new shiny style.

Asked about the brand refresh in a recent interview with Digiday, president of King Games Tjoodolf Sommestad said:

” Broadly, we’ve had more than 3 billion installs to Candy Crush Saga — so many in the world have tried Candy Crush. And we think there should be excitement for players, that is new and fresh and stays relevant for another decade. It shouldn’t feel like the same game that it was a year ago, or 10 years ago. So we’re trying to tap into both: take the players that are loyal on that journey of evolving the game, but surprising and delighting players that are coming back or coming to Candy for the first time.”

In this article:Candy Crush Saga, King