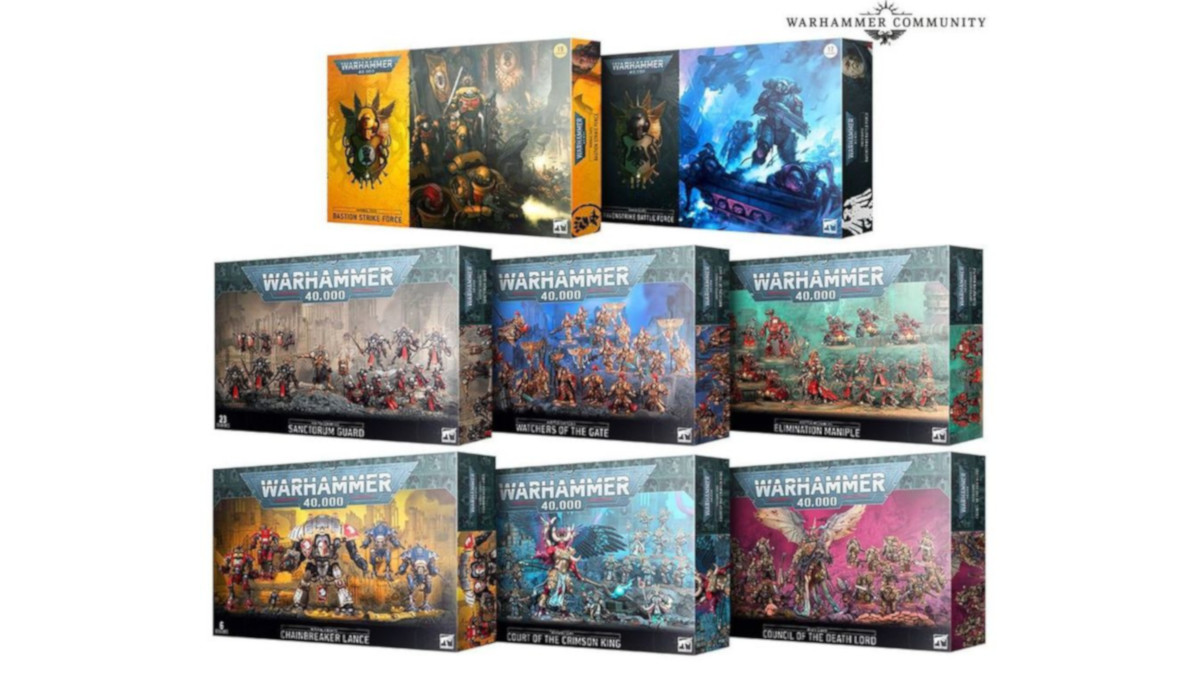 As in previous years, Games Workshop have decided to put together some choice pieces of plastic in the form of eight new Battleforce box sets. These boxsets cover a decent selection of the available races and there should be something amongst them to tempt everyone.

Pricing has yet to be confirmed but I imagine that they will be cheaper to buy as the boxset rather than buying the models individually. My firm favourites are definitely the Council of the Crimson King and the Sanctorum Guard.

Morvenn Vahl was never content with helming the Sisters of Battle from the safety of Holy Terra, and this Battleforce puts her at the head of a suitably zealous force of crusading Sororitas, out to punish those on the God-Emperor’s naughty list. Backing her up are six mighty Paragon Warsuits and five elite Celestian Sacresants with unbreakable shields. No Sororitas force is complete without a Battle Sisters Squad (which can also be built as Celestians or Dominions) for holding the line while warsuited battle nuns unleash hell.

Adeptus Custodes – Watchers of The Gate

The Adeptus Custodes are the most magnificent of the Emperor’s warriors, sworn to protect the Throneworld from rebels, invaders, and anyone looking to open their presents early. This Battleforce puts the peerless Captain-General Trajann Valoris at the head of a powerful cadre comprising three Vertus Praetors on Dawneagle Jetbikes (which can also build a Shield Captain) and three indomitable Allarus Custodians (which can also build a Shield-Captain and a Vexilus Praetor). The bulk of this unbreakable force is made up of 15 Custodian Guard, which also have options to build Shield Captains and Vexilus Praetors.

When it’s not enough to simply destroy a foe, the Elimination Maniples of the Adeptus Mechanicus sally forth from Mars to obliterate them entirely. This force is commanded under the watchful eyes, sensor arrays, and all-purpose noospherics of Belisarius Cawl. It also contains a pair of deadly Kastelan Robots and their Cybernetica Datasmith handler, six Kataphron Destroyers (or Breachers) that can be armed with a variety of heinous weapons, and a unit of Skitarii Vanguard which can be built as Skitarii Rangers.

Dubbed ‘Chainbreaker’ for freeing countless slaves from the Iron Warriors – rather than his hatred of Christmas decorations – the Imperial Knight Sir Hekhtur leads a devastating lance of noble war machines across the galaxy. The Chainbreaker Lance is led by the Knight Preceptor Canis Rex (which can also be built as any other Questoris-class Knight, and which comes with a pilot), mentoring swift scout-Knights known as Armigers. The Battleforce includes two ranged Helverins and two close-range Warglaives, piloted by lower-ranking Nobles.

Mortarion, Daemon Primarch of Nurgle, relishes every opportunity to spread seasonal sniffles on the battlefield. A Battleforce of bloated retainers follow in his foetid wake – five Blightlord Terminators present an immovable block of ancient and diseased terminator armour, while 14 Plague Marines march with unstoppable purpose and an arsenal of special weapons.

If the limitless possibilities and arcane mysteries of a Secret Santa are more to your liking, look no further than Tzeentch’s little helper. Magnus the Red leads a Battleforce of sorcerous might, accompanied by three Exalted Sorcerers – wicked arcanists who have stalked the galaxy since before the Horus Heresy. Ahead of them are 20 Rubric Marines, living husks of power armour enchanted with infernal warpfire.

The unyielding Imperial Fists have mustered an immovable block of yellow commanded by Tor Garadon, the Chapter’s longest-serving Battle Company Captain. This Battleforce features three Primaris Aggressors, walking fortresses of ceramite, with 15 Heavy Intercessors clad in impervious Gravis armour. You’ll also get a set of Imperial Fists Primaris Upgrades and Transfers to mark your force out as the true sons of Dorn.

The Raven Guard favour lightning strikes, and therefore make extensive use of the streamlined Phobos armour – perfect for grabbing the last turkey and making a swift getaway. Chapter Master Kayvaan Shrike leads this strike force from the front, supported by a Librarian in Phobos Armour.

In this article:Games Workshop, Warhammer 40k