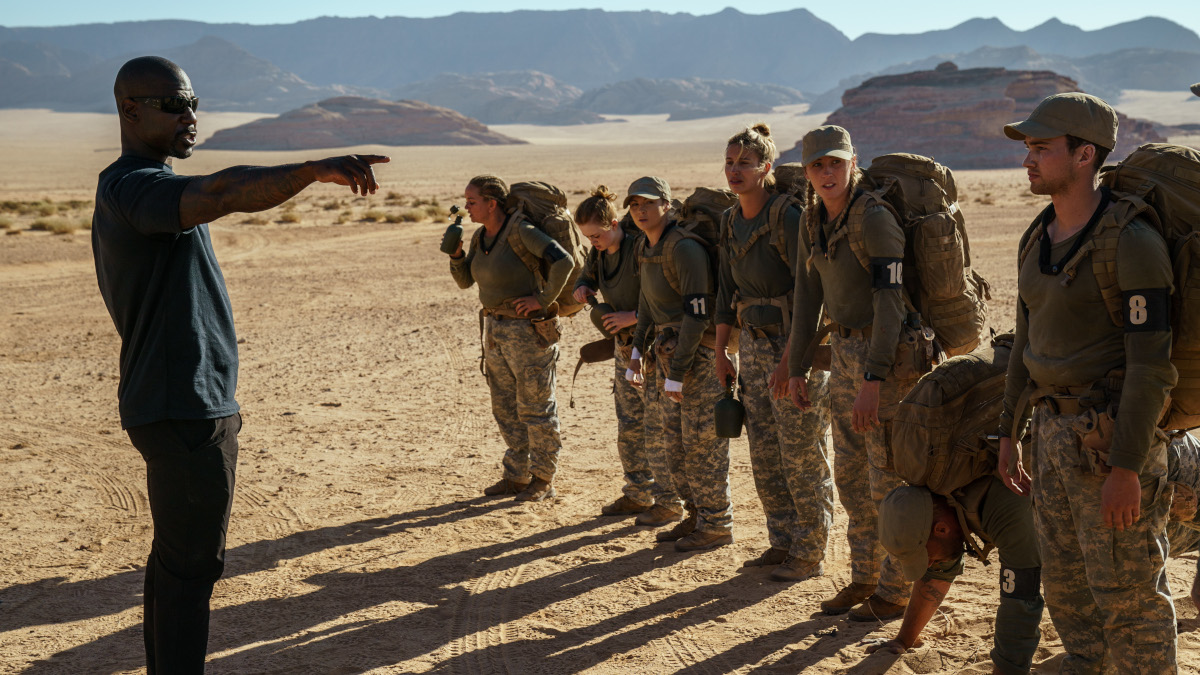 The fourth series of Celebrity SAS: Who Dares Wins continued on Sunday night. With the remaining celebs embarking on the fourth phase of the condensed SAS selection course.

In episode 4, the theme was Composure. The episode opened up with the DS discussing the celebs. They felt number 13, Dwain, number 9, Curtis and number 4, Fearne were struggling. They also thought number 11, Shannon needed more pressure. After a talk from Rudy, the celebs headed out for the next challenge.

The challenge was the Red Man – one of the most violent tasks. The aim was to test each celebs ability to dish out extreme violence coupled with composure. Each celeb ran with Foxy though a compound until faced with an enemy. They then had to attack with full aggression until told to stop.

Curtis was up first and he seemed to perform well on the task. He seemed to enjoy himself and Billy was a bit annoyed with his attitude. Fearne went wild and surprised herself and the DS. Curtis struggled with the task and pretty much gave up. Last up was Shannon who dished out some serious punishment. After the task she broke down.

The DS met to discuss the Red Man challenge and decided to speak to Shannon. The DS were impressed by her transformation story which led her to boxing world champion. She broke down when talking of her childhood and spoke of her Dad leaving. Shannon also spoke of her past struggles with addiction. Foxy and Remi gave her advice to believe in herself and Foxy said she needed to smile more.

The next challenge involved attacking a simulated enemy compound and each celebs ability to make split-second life or death decisions. They had to take and return fire before being faced with an enemy who would attack or surrender. They would then need to choose to attack or stand down. Many of the celebs impressed but number 3, Calum and Dwain and Fearne made the wrong decision and fired at someone who was surrendering. Fearne took it really hard and became very upset.

Back at base the DS decided it was time to bring Fearne in for tactical questioning. She was immediately in tears but managed to talk about her childhood. Billy wanted to explore how she had lost her confidence. She also felt she needed constant reassurance to know she was doing well. He gave her advice on how to progress.

During the night the celebs were woken up to take part in another challenge. This was a backwards dive at the Port of Aqaba. After a demonstration from Rudy the celebs attempted the same. Curtis rotated too much, as did Dwain. Fearne had a wobble before her attempt but continued and surprised everyone, including herself, when she executed the dive perfectly. Shannon also impressed with her attempt.

The DS met and were impressed by Shannon and Fearne. They decided it was time for a cull and took the arm bands of Dwain and Curtis. The remaining 10 celebs progressed to phase 5.

In episode 5, chief instructor Rudy Reyes puts ex-footballer Ashley Cain and actor Maisie Smith to the test. In the first task, both teams must construct a zipline in the Jordanian coastal port of Aqaba and get all their equipment across a body of water, without it getting wet, before going head-to-head in one of the most violent tasks on the course: murderball. They must think strategically, using controlled aggression to gain control of a tyre.

Finally, back in the blistering heat of the Jordanian desert, the two teams must work out how to load and pull a 200kg sled loaded with equipment up a narrow ravine. It’s a test of tactics as well as grit and determination.

Will Maisie manage to find her voice and successfully organise her team? Can Ashley control his anger and keep the focus he needs to be a good leader? Not all the recruits will make it through this brutal phase, as the weak must be culled before the final stages of selection.

Celebrity SAS: Who Dares Wins 2022 continues at 9pm Sunday 2nd October on Channel 4. Preview the episode with our gallery: