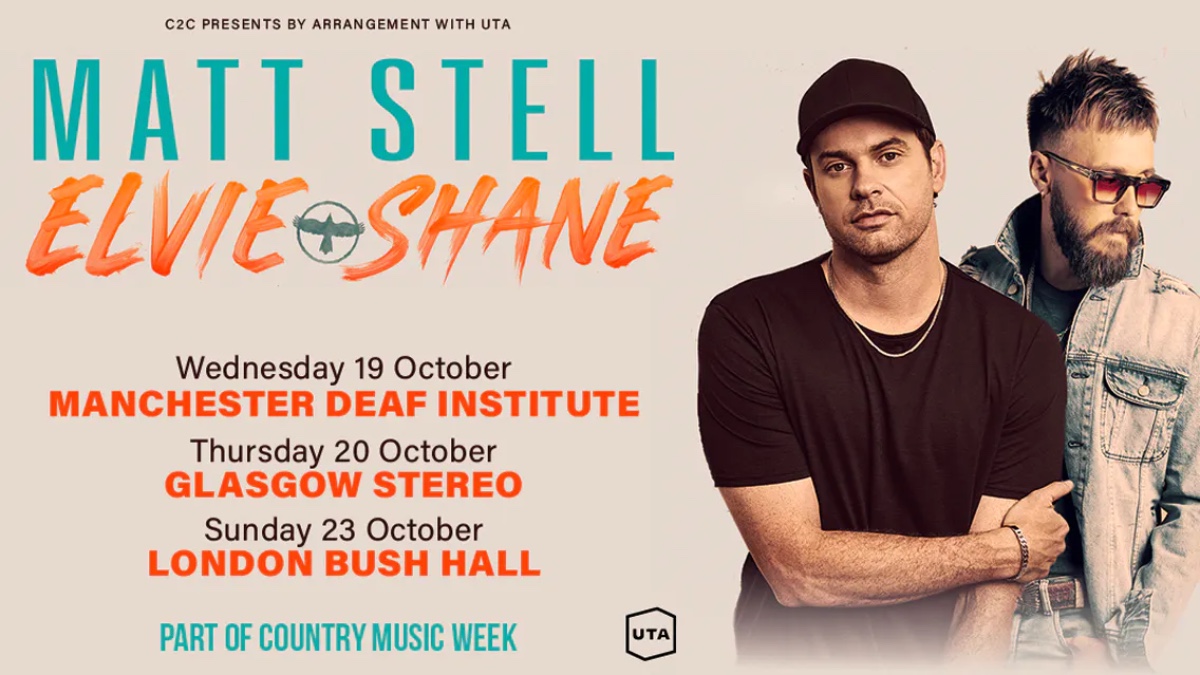 We last saw Matt Stell here in the UK earlier in the year when he played the C2C festival and various stages around that event. The rising singer-songwriter has had two number one hits in ‘Prayed For You’ and ‘Everywhere But On’ as well as appearing on such notable shows as ‘Good Morning America’, ‘The Kelly Clarkson Show’ and ‘The Late Show’. Recent single, ‘Man Made’ has just cracked the top 50 on Mediabase and he will be back in the UK for a series of shows with the inimitable Elvie Shane next month – we were thrilled to grab some time to talk to him all about it.

Great to talk to you today, Matt. Thank you for your time.

It’s great to think that you will be over again in the UK playing some shows with Elvie Shane next month.

We’re excited to be coming back over there!

In the video that you made documenting your trip over to the UK in March for the C2C festival you said that you would have stayed here if we’d have had Busch Light beer, so presumably you had a great time?

Oh man, I had the best time. It was my first time over in Europe and I really tried to make the most of it. I got to see some unbelievable stuff and meet some unbelievable people, it was a everything I’d hoped for and more.

When you come over next month we need to get you on some fine British beers and then the Busch Light thing won’t be an issue!

Absolutely! That sounds good to me. We had so much fun at C2C – seeing folks from so far away not only enjoy my music but already know the lyrics, you know, was really special. I’d always heard that Country music has some loyal fans in your neck of the woods and that turned out to be true.

You are coming back for shows in London, Manchester and Glasgow in October with Elvie Shane. Have you played with him before?

I know Elvie well, man, he’s a friend of mine and a great guy. He’s a real dude and a real talented dude, too. He makes music that matters that people, which is the most important thing you can do.

I’m excited to pair up with him and get to hang out with him as well, I’m really looking forward to it, man.

Are you going to try and see Manchester City play whilst you’re over here? (Matt is a Man City fan)

I sure hope so!! Last time I was in town I tried to line up something but we just couldn’t make the schedule work. I may try to get in to the UK a couple of days early this time and try and see a game. Man City and Spurs played a friendly here a few years ago and I loved watching them. A lot of time we can see UK football here in the States in the mornings, what a great start to your day that is! (laughing)

It looked like you had a great summer. I was out in Nashville in June for CMAFest and saw you play music. Noticed you were bar tending too at one point! You’ve been out on the road as well.

We had a great summer this year! It’s been so busy, so, so busy! Typically summer is fair and festival season and then you go out on the road in the fall. ‘Man Made’ going to Country radio has meant that we’ve been really busy with that and logging a lot of hours there too. We’ve definitely burnt a lot of diesel and logged a lot of airline miles this year!

Have all the flights gone smoothly or did you have some of the problems with luggage and cancellations that we’ve been having with the airlines over here?

I’ve had the same problems that a lot of people have had! (laughing) It sounds like it’s a global problem right now which must have something to do with the craziness of the past couple of years. Let’s hope it’s better by the time we head over to the UK next month, right?

We had cancellations, delays, you know? It’s one of those things that you have to get used to. One of the consequences is that we’ve become a little nervous about flying in somewhere on show day because you just can’t guarantee arriving on time right now. You have to build in those travel arrangements in terms of time and cost I guess now.

What drew you to ‘Man Made’ when you first heard that lovely song?

Oh man, I knew that was my song the first time I heard it. It felt different, fresh, you know? It’s got a melody that I love and the lyrics are so authentic and real, it’s such a relatable song. There’s such a positive vibe to it as well. I typically gravitate towards slightly heavier stuff, you know, ‘Prayed For You’ is what it is but most of my stuff is heavier.

Straight away I knew that I wanted to be the one to take that song out into the world.

I heard you sing it on the Bobby Bones show. What was it like bringing your mum with you onto that show?

It was great! (laughing) I surprised her and didn’t tell her that that was what we were doing! I told her we were going out to have doughnuts with some of my music people. She’s great, man, she’s a bad ass in her own right and really interesting to talk to – I knew it would go over well.

Is ‘Man Made’ going to be part of a wider body of work coming down the line later this year or maybe next?

For sure! I’ve got new music in the pipeline which it will definitely be a part of. I’m looking at ways to get more out into the world right now and then it will just be a case of deciding what as well.

The biggest issue we have is how do we make new music and then leverage it the most so that people can hear it. It’s all part of the conversation with the label and the various teams that we have working with us. I’ve definitely got a bunch of songs that, hopefully, people will get to hear very soon. There’s some pretty hard rocking songs that we have up our sleeve as well as the odd guitar ballad thrown in along the way for good measure too.