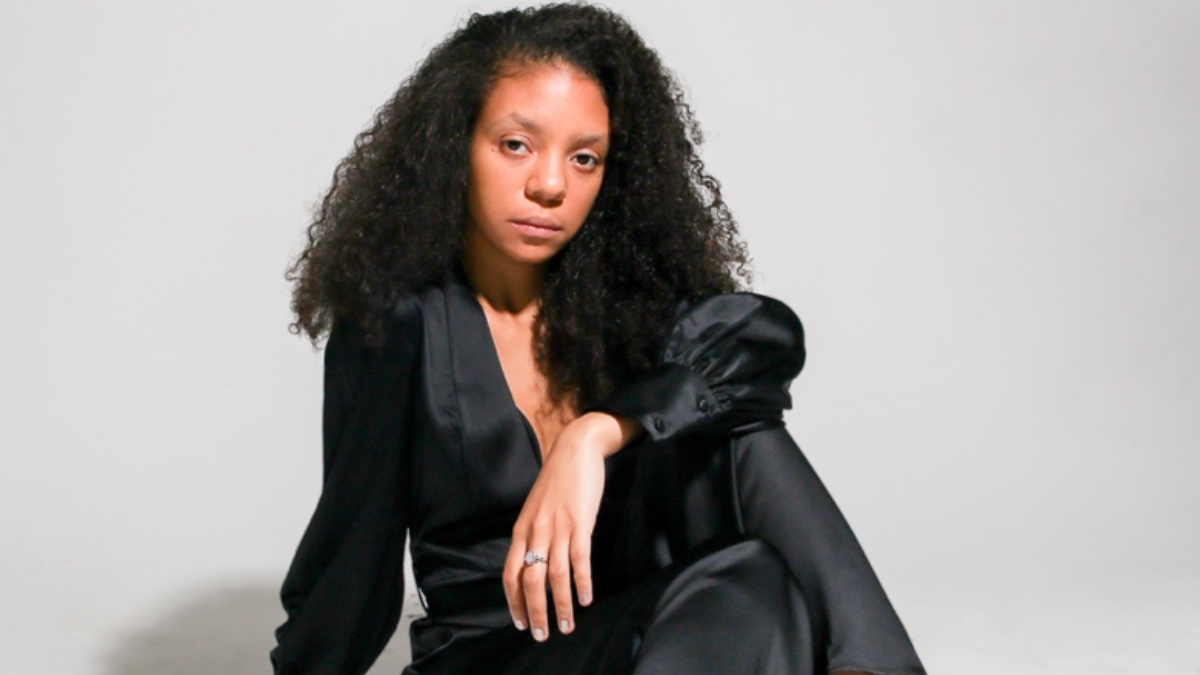 Simeon Hammond Dallas is a singer-songwriter from London’s Camden Town. An enemy of dichotomy, her music is soft and vulnerable while packing a punch at the same time. It refuses to be pigeonholed. One listen to new EP ‘Make it Romantic’ and you’ll hear the Blues, Soul, Jazz and even elements of Country music too.

January 2019 saw the release of her debut self released single ‘Wild Woman’. A country-rock feminist anthem and predecessor of the debut EP ‘Manic Pixie Dreams’, which crosses genres from folk, country, blues, and soul, tied together with a strong acoustic guitar and a powerhouse of a voice.

In 2020 Simeon was listed among the ten top black female country artists to look out for in several publications. ‘Make it Romantic’ is out TODAY (August 11th) and we were thrilled to catch up with Simeon recently to talk all about it.

It’s great to speak to you today, Simeon, thank you for your time. You must be excited about the EP release?

I’ve just taken delivery of the vinyls, which is very exciting although not so great when you live in a flat in London and 700 of them get delivered to you on a pallet outside on the street! (laughing)

‘Make It Romantic’ is your second EP now. In what ways have you grown and evolved as a writer and musician from your debut ‘Manic Pixie Dreams’?

‘Make it Romantic’ definitely explores deeper themes for me in terms of songwriting. I wrote the songs over lockdown which was such an interesting time to be a creative person. I had to look for other ways of writing and sparking creativity during that period.

When I think about my experiences in music and of being a woman and a woman of colour too, it can feel almost too overwhelming to even dig down into sometimes because there are so many things I could say! (laughing) Lockdown gave me the space to examine my own space and almost not be part of the world that I was criticising or exploring in my music.

‘Manic Pixie Dreams’ was more about the surface level of my experiences and on ‘Make it Romantic’ I go deeper into that than I ever have before.

Where do you take your inspirations from? Some writers use films and books, others use their own experiences and others use the human stories of the people they know around them.

Mine comes from all of the above! Books, films and works of art have been generated by someone else’s imagination when they were inspired by something else. A good piece of art is something that talks about the human experience and puts it into a form that resonates with us, whether that’s words, music, sound, pictures or any kind of expression.

Sometimes my favourite books say things that I would never be able to say. Even things like Classical music and other things that don’t have a narrative through words still take you on a journey and you can connect with that. I’m very interested in anything that allows us to experience the human condition and informs us about ourselves.

Tell me a little about your journey, the journey that brought you to who you are today. You grew up in Camden, London. Did you come from a musical family? Where were your formative inspirations from?

My parents are both teachers. My dad was originally an actor and then became a drama teacher. When I was growing up he was involved in acting and directing in theatre so there was always a creative buzz around. Our household was very musical although neither of my parents were musicians. My mum is also very creative, just in different ways.

Both my parents were always supportive of me being a musician. We all listened to a lot of music. My dad has such an eclectic record collection, which exposed me to a lot of different sounds and styles. My dad is Jamaican and we listened to a lot of Ska and Reggae and then living in Camden and hearing music all the time was a huge influence on me.

Your sound is so eclectic. It’s a wonderful fusion of Blues, Jazz, Rock, Soul and Country. Do you ever worry that the media or the industry will struggle to know where to place or ‘pigeonhole’ you or do you just make the music that you love and let everything else take care of itself?

A bit of both really! (laughing) I do have those thoughts sometimes, like, ‘Do I need to make this song a little more straight Country?’ and things like that! That fusion, though, I think is also my strength. I want to do service to a good song and I don’t want to think about the promotion aspect of songs whilst I’m in the creative aspect.

If the media want to pigeonhole someone, that’s up to them. It’s not me job to make myself fit into boxes for other people. One of the things that people like about my music is that there are little bits of everything in there, it’s very inclusive and diverse, which might well give me a wider target audience in the long run! (laughing)

My favourite artists have all crossed genres. Joni Mitchell was writing Folk music and then moved into jazz and Bob Dylan doesn’t even sing his own songs in the same way that he recorded them sometimes! Part of being human is growth and evolution and musicians shouldn’t have to be constrained by rules and boundaries if they want to grow and evolve too.

Picking up on the EP, I can see why you’ve chosen ‘The Blues is a Game’ as the opener. It really explodes out of the gates. It’s a fierce, quite angry song in places. I love that mantra in the final third, ‘You ain’t got the Blues, you’re just a sad, sad man’ Tell me about it.

That song came from the lockdown in 2020. The Black Lives Matter movement was happening and social movements like the ‘Black Out Tuesday’ campaign was happening on Instagram too. I’d seen a fair number of people on Instagram supporting the campaign who I’d seen in and around dingy bars in London previously making inappropriate or frankly racist comments.

I had also got annoyed at musicians making racist jokes or making inappropriate comments and then getting up on stage and saying ‘I’m playing the Blues now so everyone should listen to me because the Blues is really cool’, you know? There’s a disassociation and a level of hypocrisy from some people who put the Blues up on a pedestal for their own gain or image.

The ‘sad, sad man’ mantra came out of those frustrated feelings that I had at the time.

Your vocal intonation on songs like ‘A Hundred Lovers’ and ‘Fucking Her’ (more about that one later!) is very English. So many British singers sing in that kind of Mid-Atlantic voice. Do you make a conscious effort, being a Camden girl, to emphasise your Englishness or is that just the way your voice and vocals are?

It is just my voice, I think! (laughing) Sometimes I do catch myself taking on a little American or Mid-Atlantic intonation and then sometimes I hear myself being VERY English, so it’s kind of confusing!

I’m a Camden girl, born and raised in London, so when I say ‘fucking her’ it’s coming to come out that way! (laughing) As humans we’re always intrigued by differences so hopefully people will hear my vocals and be interested in what I have to say and how I sound.

Is ‘Betting on You’ about one man in particular or men in general?

So, presumably, you’ve had a number of negative interactions with men in the music industry then?

(pauses) Yes! (laughing) I’ve had a few. Not necessarily massive things but I’ve encountered comments about things like my age. I’m actually older than I Iook and when industry types find out there’s that sort of ‘Pop’ mentality where women have to be younger than 24 and sing about certain things and behave in a certain way.

The song is also hopeful because what I’m saying on ‘Betting on You’ is that I’m not going to rely on you to get me to where I want to be, I’m going to put my faith in something else, in me!

‘Fucking Her’ has a raw, 1970s type of Rolling Stones vibe to it. Which period or decade of music do you identify with the most do you think?

That’s an interesting question. I’m not sure really. All of them? It’s interesting you say that about ‘Fucking Her’ because we didn’t go into the studio with the conscious decision to try and make any song sound like it comes from a particular period in time.

I wrote the song just on an acoustic guitar as a kind of lockdown project for myself to be creative in a time when it was difficult to be so. I went through the voice notes on my phone and found this song and it reminded moof how much I liked it. In my head it was going to be a lot Bluesier than it ended up coming out but when we put the full band onto it, it just evolved into what it is today. My engineer was listing to things like old Beatles tracks when we cut it so so that would have been an influence. It does have a fun, wild Rock n Roll feel to it that I really like.

Using the title, ‘Make it Romantic’ as inspiration I googled ‘what are the most romantic songs of all time?’. Things like ‘I Will Always Love You’, ‘When A Man Loves a Woman’ and ‘Unchained Melody’ all kept coming up. What’s your favourite ‘most romantic’ song?

The one that came at me as soon as you asked that was ‘We Belong Together’ by Rickie Lee Jones from her ‘Pirates’ album in 1981. It’s a gorgeous song. My dad had the vinyl and all the lyrics are on the back and I remember spending so much time looking at that vinyl so when you asked that it just jumped out and hit me in the heart!

‘Make it Romantic’ is out everywhere today now. Buy the vinyl. Tickets for her EP launch, the Long Road festival and her support slot out on tour with Lady Nade in October can all be purchased on Simeon’s website

In this article:Simeon Hammond Dallas