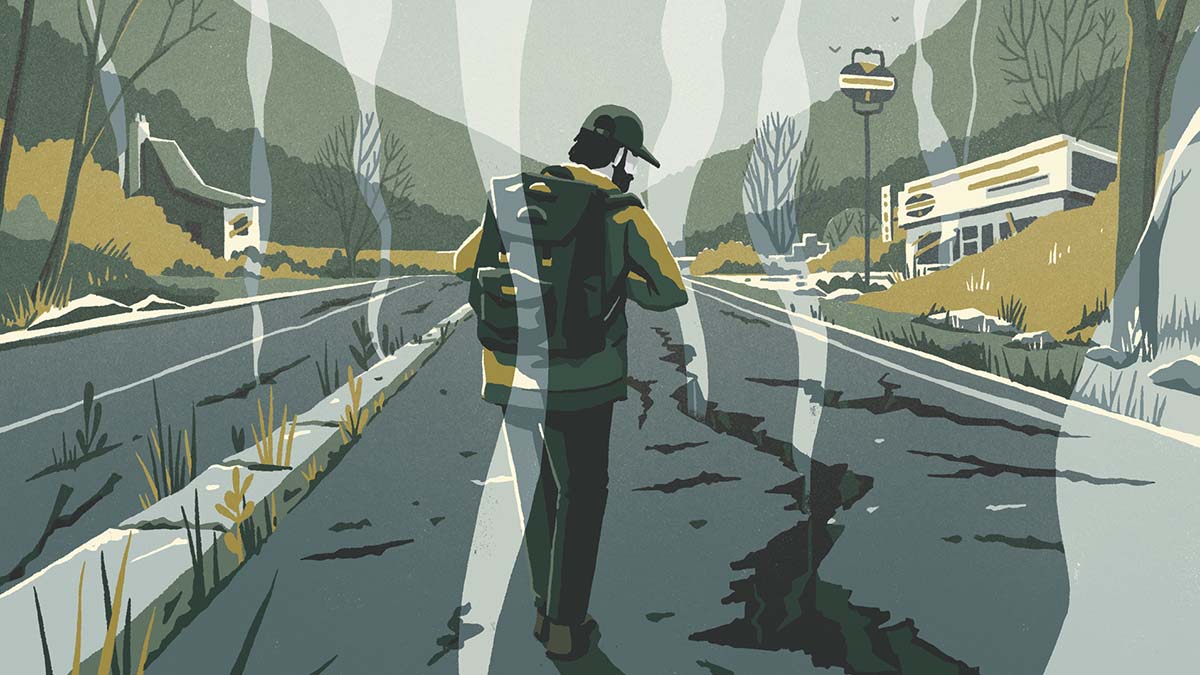 The Folio Society’s edition of American polymath Bill Bryson’s celebrated travel book ‘A Walk in the Woods’ coincides with the twenty-fifth anniversary of its original publication. Bryson is in the unusual position of being equally loved and feted on both sides of the Atlantic, where his wry sense of humour straddles both countries. The title that preceded this one, ‘Notes from a Small Island’, was an affectionate look at his time in the British Isles, pointing out cultural differences between the two nations with his trademark observational wit and ability to richly convey small details.

‘A Walk in the Woods’ recounts his time in his home country. The subtitle is ‘Rediscovering America on the Appalachian Trail’. The route, mostly through densely-forested areas on America’s East coast, is over two thousand miles in length and takes travellers through fifteen states. Bryson was comfortably middle-aged at the time, and not a professional hiker. He is accompanied by his old travelling companion Stephen Katz, a reformed alcoholic who has put on a lot of weight in the intervening years since their last adventure.

The journey is enough to kill a novice. Bryson and Katz leave prepared, weighed down by a dizzying array of equipment sold to them by earnest hiking specialists. One deviation from the trail is likely to result in death, since the woods are so dense that it’s easy to get lost, and then almost impossible for search and rescue to find you. You’ll die of exposure or be eaten by predators long before you succumb to thirst. The forests are home to black and grizzly bears, who are known to be territorial. Then there’s the little matter of the extreme weather conditions to contend with, where death from heatstroke or hypothermia are both fates easily wandered into by the unwary. Undeterred, Bryson and Katz set off, determined to come face to face with destiny, reconnect with nature, and accomplish something truly extraordinary. What could possibly go wrong?

‘A Walk in the Woods’ falls firmly into the camp of the narrative being about the journey and not the destination. Readers are under no illusion about this from early on, when Bryson and Katz miss out huge chunks of the trail, thumbing rides from locals. The most accurate way of describing the book is as a buddy story framed within standard non-fiction travel writing. These days it may even be described as a ‘bromance’, but I doubt that Bryson and Katz would embrace that epithet. Funny and informative at equal turns, ‘A Walk in the Woods’ is never anything other than immensely readable and hugely entertaining. Bryson has a commendable ability to place his reader in the centre of the scene. You can see the landscape in your mind’s eye. You can smell the earth and feel the heat of the sun or cold of the rain and ice. You can feel the travellers’ weariness. You can tune in to their often terse conversations as if they are talking about their adventure from the table next to yours. You are there.

Minor characters pepper the book and leave an indelible impression. Mary Ellen is my favourite example. A naive and supremely irritating young woman with some odd habits, she ends up being an abject lesson in that solitude is sometimes preferable to unexpected human company. But it is the interaction between Bryson and Katz that forms the backbone of the book. The tension during the final sections, in which they become separated, elevates the humorous effect of the ending. Yet it’s not all japery: Bryson’s concern for his old friend as he is haunted by his demons during their time together is understated and all the more moving for it.

There are curiosities that will delight fans of travel writing. Visiting the ghost town of Centralia, Pennsylvania is an especially intriguing chapter. Abandoned in 1980 after a continuous coal mine fire beneath the ground, the roads still billow with smoke and toxic fumes as if leading directly to hell. One of the striking illustrations by James Weston Lewis, used as the feature image of this review, captures this particular instance of nature winning out over humanity. This is, after all, one of the book’s main themes. In between scenes, Bryson inserts some commentary on the Appalachian Trail that will also satisfy travel writing enthusiasts hungry for knowledge. He writes about the National Park Service, the flora and fauna of the forests, and the effect of extreme weather upon human survival – some of these stories are, to warn ahead of time, not for the faint-hearted!

The Folio Society’s edition of ‘A Walk in the Woods’ is beautifully produced to very high standards. A green hard cover is embossed with mountain scenery giving it the look and feel of a travel book, and it is stunningly illustrated by James Weston Lewis. His reproduced map at the front of the book summarises the fifteen states that the Appalachian Trail passes through, giving readers some indication of the sheer scale of the adventure undertaken by two determined if unlikely men. ‘A Walk in the Woods’ also, for UK-based readers, puts into perspective the difference in land mass between our own country and the US. There’s little indication that Bryson undertakes the journey to connect with his home country. This is the story of a man testing his own limits of endurance and setting out to achieve something that will allow him to see a mountain and look at it slowly and appraisingly, with a narrow, knowing gaze, and eyes of chipped granite. And that’s reason enough. As for the reader, being at Bryson’s side for the journey, whilst experiencing it from the comfort of your own home, is an unstinting pleasure and privilege.

In this article:A Walk in the Woods, Bill Bryson, The Folio Society, Travel Writing