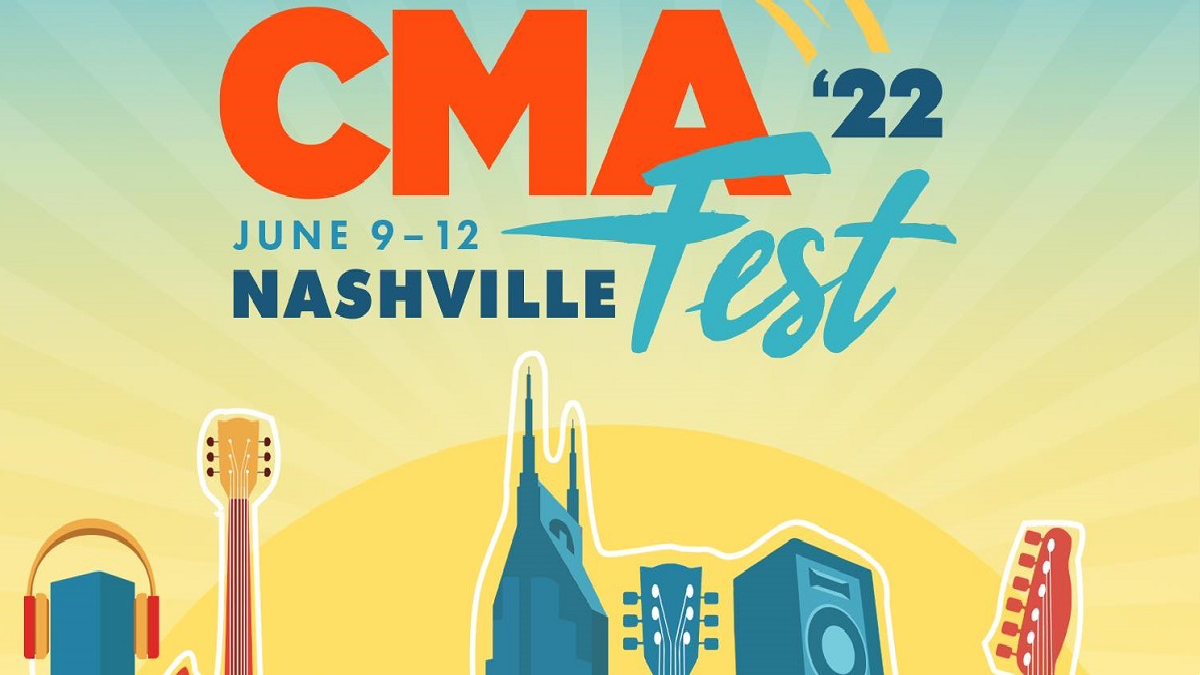 When I interviewed Nate Smith this week he described next month’s CMAFest in Nashville as ‘Christmas for Country music fans’. That got me thinking about my own plans to fly out to Nashville from the UK for my first ever CMAFest.

There is a lot of excitement around the festival this year, mainly because a) it’s brilliant and b) it hasn’t happened for two years because of the Covid pandemic but it’s back again for 2022 and many of the usual things are happening again.

We like the addition of the ‘Riverside Retreat’ area at the Riverfront stage this year. Guaranteed entry, shade, refreshments, charging points and air conditioned toilets!! I bought my ticket after the line ups were announced because most of the artists I want to see are playing there at some point over the four days. The usual fan parties are being announced separate and adjacent to the festival itself, so if you want to see artists like Luke Combs, Morgan Evans, Ashley McBryde and Cole Swindell, amongst many others, you can try and bag tickets for those events too.

Many of the live venues are also hosting evening shows if you have chosen to go to Nashville but not got stadium tickets. Iconic venues like the Listening Room Cafe and 3rd & Lindsley have ticketed shows with Country artists all week, as does the Opry and the Ryman. I’ve got tickets to the Opry at the Ryman ‘Country Classics’ show on Saturday June 11th at 3pm and the Ryman is also hosting a free ‘Block Party’ featuring up-and-coming Country artists outside its doors from Thursday to Saturday too.

The elephant in the room, however, remains which artists to go and see because there just aren’t enough hours in the day to see everything and everyone. So, here’s a guide, in no particular order, to the 10 artists you should see during CMAFest who are playing stages outside the Nissan Stadium. I haven’t included Nissan Stadium artists because if you are reading this, you will know everything about the artists ‘at the big show’ already!

Jimmie kicks off the whole festival here. With new album ‘Tulip Drive’ on the way and one of the strongest singles of 2022 already out there in ‘Down Home’, Jimmie will start proceedings off with a bang!

This will be one of the first shows to feature new singer Stevie Woodward so it will be well worth a look at how she fits in and how the dynamic of the trio will have changed.

Elvie released one of my favourite albums of 2021 in ‘Backslider’ and with a no.1 hit in ‘My Boy’ under his belt he will be a big draw at the Riverfront stage so get there early so some excellent southern fuelled Country Rock!

Larry Fleet – 11.30am on Friday June 10th at Riverfront stage

Another artist we’ve been looking forward to seeing for a while now. Fleet’s ‘Stack of Records’ album was another one of my favourite releases from last year and I can’t wait to hear songs like ‘Where I Find God’ and ‘Church Parking Lot’ live and hear that voice ringing out!!

With the terrific ‘I Don’t Wanna go to Heaven’ with Tenille Townes already lodged in as a contender for song of the year, Smith has gone and released an even better follow up in ‘Whiskey on You’. A rising star in the making, catch him in this intimate setting before you lose him to the arenas!

I saw Hailey in London at the C2C festival and that was enough to convince me that we have a very special artist in our midst here. Superbly talented, a wonderful songwriter and full of charisma and southern charm, Hailey is a must-see artist for 2022.

Priscilla will be on the main stage at Nissan Stadium within 2 years, mark my words. New album ‘Welcome to the Block Party’ is one of the strongest of the year and her stint in front of the TV cameras hosting the ACM awards showed everyone just what a talented and charismatic artist she is.

Jackson has released my favourite album of the year so far in ‘Greenbroke’. He’s got the Blues of Stapleton and the balls of Combs behind him and is definitely an artist that should be on everyone’s radar.

Allie released her terrific ‘Stones’ album last year which saw her take a step forward in both her songwriting and artistry. She’s just released ‘Halos and Horns’ which is a bombastic, ‘God’s Country’ style anthem which we can’t wait to see live.

Tenille has a strong relationship with us over here in the UK after numerous visits. Most recently we saw her at the C2C festival playing with a full band and it was like seeing a completely different artist! We can’t wait to see her rock the Riverfront stage as the festival begins to wind down – it’ll be the shot of adrenaline that we all need at that point in proceedings!!

Other artists well worth checking out:

Drake White – 10.45am on Saturday June 11th at Riverfront stage

Callista Clark – 10am on Sunday June 12th at Riverfront stage