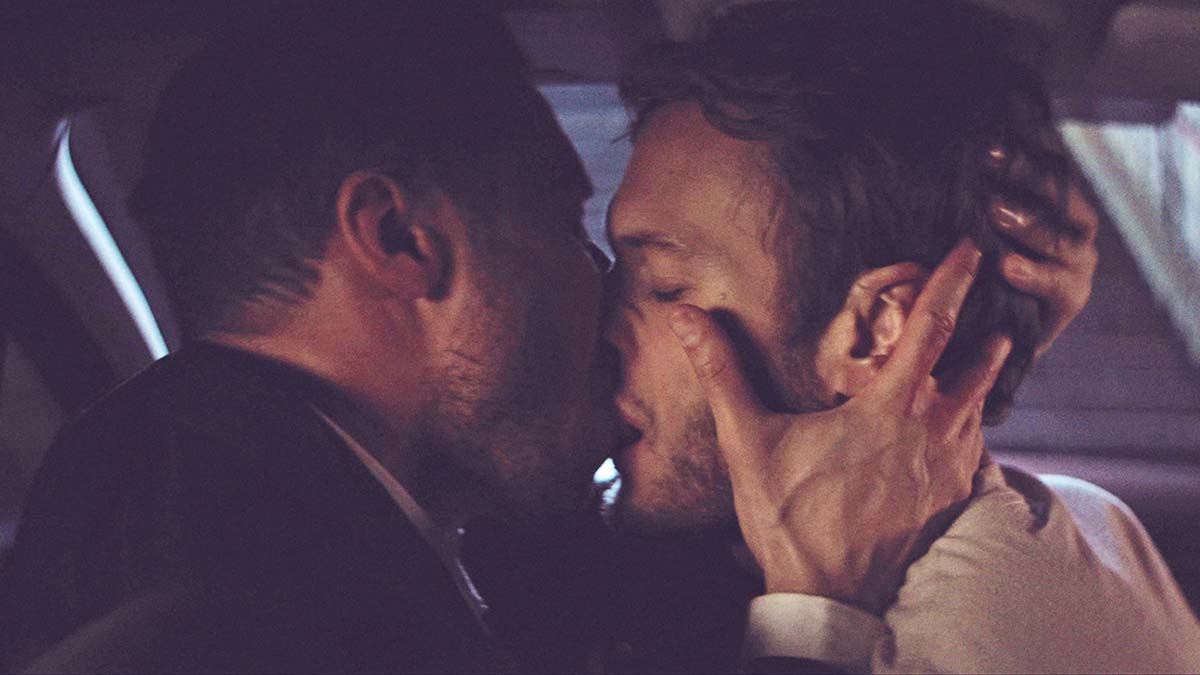 ‘The Male Gaze’ has established itself as one of the best strands in the NQV Media catalogue so I was delighted to discover that a new instalment, ‘The Male Gaze: Fleeting Glances’, is on the way. This release features 7 shorts from Italy, Israel, Tunisia, New Zealand, the United States and France, exploring those furtive first steps that men take as they decide to act on their sexuality.

‘The Male Gaze: Fleeting Glances’ opens strong with the one-two punch of Lorenzo Caproni’s ‘The First Time’ and Johnny Doov’s ‘Kiss Me’. The former finds a nervous young man attempting to embark on his first same sex sexual encounter in a public toilet with a man whose eye he’s caught, while the latter sees an awkward hook-up fizzle out before it’s started due to one of the men feeling uncomfortable with intimacy. Both of these shorts capture that moment in a gay man’s life when they are torn between taking those first steps and feeling uncomfortable about giving in to their desires.

The tone shifts drastically for third short ‘Nidahl’ by Bassem Ben Brahim. Focusing on the subject of its title, the short takes the form of an interview with Nidahl, a Tunisian gay man who was forced to seek asylum in the Netherlands after publicly fighting for gay rights on a local radio station. It’s a timely reminder that not every gay man is able to live as their authentic selves and that the Western acceptance of homosexuality still doesn’t extend across the entire globe.

For me, the collection dips a little bit with the two shorts sequenced in the middle. Welby Ings’ ‘Sparrow’ tells the tale of a little boy who is inspired by his war veteran grandfather to stand up to school bullies, while Artemis Anastasiadou’s ‘I Am Mackenzie’ sees a teenager presenting as male but harbouring feelings for their skateboarder friend. While both shorts have something to say, and provoke discussion, I didn’t find them as strong as the rest of the shorts on the collection.

Lorenzo Caproni gets a second short with ‘The Place Between Us’, one of the longer shorts here that explores the relationship between two men through the lens of a video camera controlled by one of them. This interesting style choice allows one half of the couple to understand things about his relationship that he’s been too close to understand before.

The collection comes to a close with Denoal Rouaud’s excellent ‘By The End of the Night’, which tells the story of taxi driver Karim (Sofian Khammes). Karim picks up artist Alex (Jordi Gimeno) and is conflicted when he finds himself attracted to him. What follows is a night of self-discovery that leads to Karim facing his truth for the first time and beginning to come to terms with who he is.

‘The Male Gaze: Fleeting Glances’ continues the strand’s strong streak. While I didn’t love every single one of the shorts here, I liked enough of them to once again recommend this series. It’s so important for the gay community, and those who want to learn more about it, to understand the experiences of gay people around the world and this series is a great opportunity to do that.