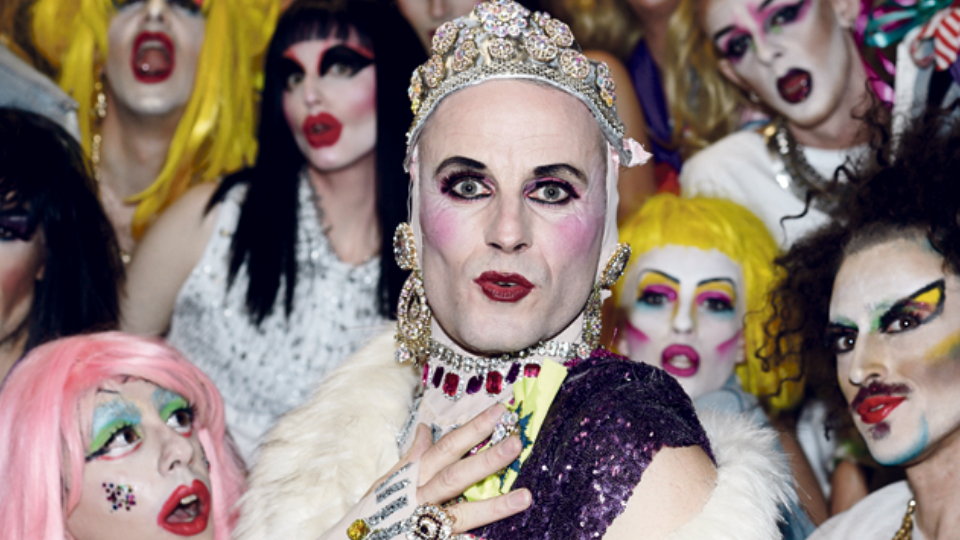 Cabaret star Jonny Woo returns with his ‘Un-Royal Variety’ show at the Hackney Empire for its third year on 19th and 20th October.

This year Jonny tells me it’s going to be bigger and better than ever before as he brings you the ‘the best in cabaret, drag and nu-variety.

In what promises to be an exciting mix of UK and transatlantic performers, I caught up with Jonny to find out more on what’s in store and how he is cultivating this emerging scene and subverting the traditional Royal Variety concept.

What can audiences expect from the upcoming Un-Royal Variety?

It’s the best in provocative and alternative comedy and cabaret not just in London but the world with some very special guests from the USA flown over for the event. It’s unashamedly queer and political but also wildly funny, outrageous and incredibly warm and inclusive. It’s a pastiche of the classic Royal Variety format, so familiar territory there, with live band and dance routines as well as being full of the unexpected. Not all the acts are for the faint-hearted.

How do you curate each event?

I choose the artists I love to see; the first year I just thought it would be great to do a massive show with my favourite acts. It’s such a pleasure to perform in the Hackney Empire, it immediately feels like an event, an occasion and I think the venue deserves the best and think the best deserve this theatre. I am very picky and not all acts I love would fit the bill – everything needs to compliment the other or contrast in the right way. I am making an effort to make sure I have a good line-up of women headlining as LGBT shows can often have tons of drag queens, i.e. men.  Also I’m working on making sure I introduce more performers of colour. It’s an ongoing process.

What have you changed and what is new for the third show?

Well we have an ensemble of artists who play every year. Such as Myra and Jayde. but they are both doing totally new things. Myra has written a song with Richard Thomas and Jayde is part of a very bonkers re-staging of the Freddie Mercury classic ‘Barcelona’. Myself and Jayde have matching chiffon gowns. Chriteene is back with Lucy McCormick and they have made a new dark mini panto. Also we have Adrienne Truscotte for the first time, Mawaan Rizwan doing a full set with dancers, a long time wish of his. It’s all new. Some familiar faces, but the whole show gets re-made every year.

Why is political satire important to you and how to you keep this fresh and relevant?

It just became vital when the referendum happened and the political landscape changed so drastically that everything became political. You can’t get away from it. We are now all engaged and aware that our voices matter. Things are changing so fast and I think ideologies are being challenged in the heart of our own country. I just try and respond the best way I know how and to invite artists to do the same. I’m not an avid reader of papers so I go with my gut and try and create from the heart and hope it speaks to the audience and provokes debate and discussion.

How did your collaboration with Richard Thomas (Jerry Springer: The Opera) come about?

I met him at a social gathering and we started chatting and I just asked him to write me a song. I think he was drunk, maybe. He said yes and it was the start of a wonderfully productive relationship, one which will culminate at The ENO on 17th December when our Brexit cabaret is performed there.

Cabaret stars Bourgeois & Maurice, comedian Jayde Adams and drag icon Lavinia Co-Op are among the line-up, as well as a choir with all the singers dressed as Theresa May.