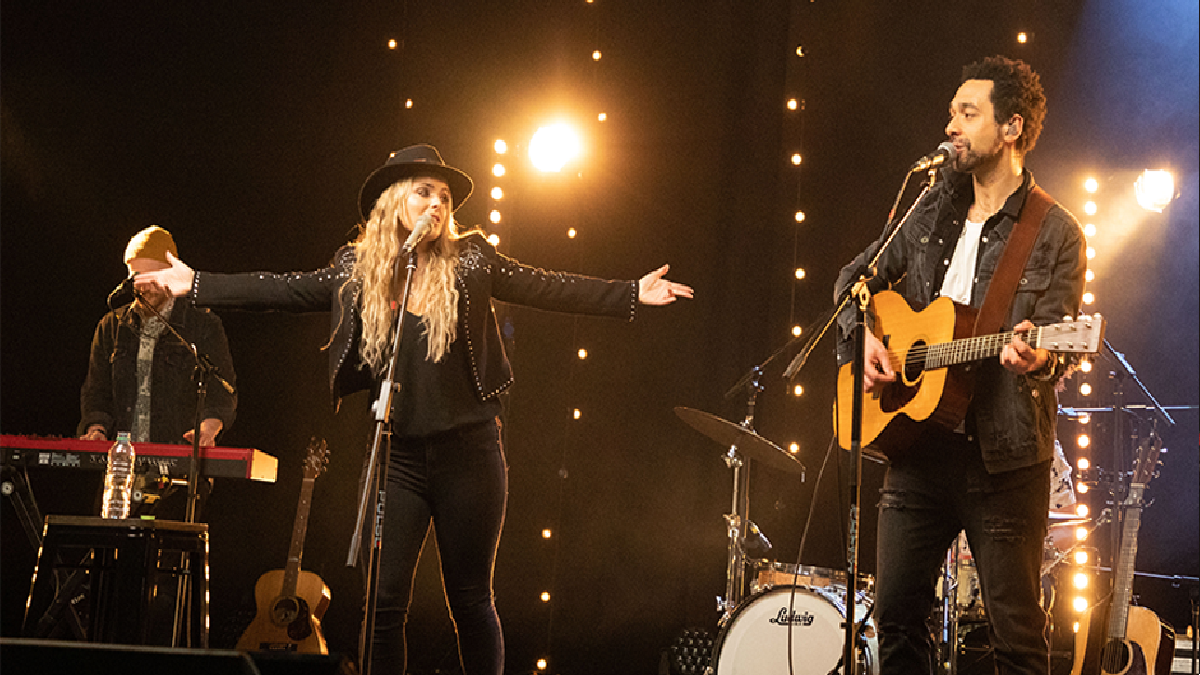 On the last Thursday night in April, UK country fans had at least THREE music venues to choose from: city, beach or sofa (for Bob Harris’ BBC Radio 2 show). I found myself an hour away from home at the Torquay seaside of Devon’s English Riviera to see home grown British country act The Shires whilst upwards of 3000 people turned up to see Keith Urban in Birmingham

The added benefit of attending a small town show is that you can bump into the artists, like Eric Paslay pottering around town with a camera. Thanks for the picks, Eric!

Also supporting The Shires on tour was vocal-powerhouse Kezia Gill.  Three amazing country acts on one stage?  This mini festival was the only choice for me, regardless of journey time.

First up on stage at 7:30pm was Derby lass Kezia, opening with fan-favourite ‘Country Song’, which always makes me want to go to Nashville to be invited to dance (as if I need an excuse). Kezia quickly realised not a lot of people knew who she was, but her natural charm, generosity – and, yes, northern humour – ensured her twenty-five minute set rightly earned her a few more fans.  I literally couldn’t get to her at her merch table after her set, where she made two sold-out appearances.  Great craic with the crowd, particularly during her performance of ‘Thirties’ when we all realised she was possibly one of the youngest in the room of 1500.  Kezia finished her set with an incredible performance of BCMA UK Song of the Year ‘I’m Here’, reminding me to reach out to friends I perhaps haven’t seen for a while.

Just a few minutes later, at 8pm, Nashville songwriter, Eric Paslay, stepped onto the stage of Torquay’s Princess Theatre, opening his forty-five minute set with ‘Angel Eyes’, from his latest album, Even If It Breaks Your Barefoot Friday Night (apparently, you could own a piece of this unique album; read Eric’s NTF discussion with EF Country) which already has number ones alongside Grammy and ACM-nominated hits; a brilliant way to provide a Greatest Hits album.

Paslay cast cultural observations into the crowd about water towers and tailgates in ‘Song About a Girl’.  There’s a reason Eric is an award-winning songwriter; keen appreciation of a lyric.  You only have to consider the final three lines of ACM-nominated ‘She Don’t Love You’ to fall in love with lyrics.

Irish band U2 turned up in a medley of ‘Still Haven’t Found What I’m Looking For’ and Paslay’s 2011 number one for Jake Owen, ‘Barefoot Blue Jean Night’.

Highlight of the night was hearing Paslay share his story of texting Keith Urban when he realised they were both performing in the UK on the same night.  He then launched into the ‘Wild Hearts’ song he co-wrote, which would be played an hour or so later in Birmingham, by Urban.  EF Country shared the videos on Twitter, of course, for our gorgeous country-loving audience.

The best quote of Paslay’s set was definitely hearing him say he, “loves having an accent again”.

AbsoPaslaylutely; what a night of live music. Thank you for travelling to the UK.

There was just enough time for a quick stage turnaround, otherwise known as crowd-around-a-beaming-Kezia, at her merch table, before The Shires’ show.

When Chrissie and Ben took to the stage, just after nine, I was so giddy I forgot to list the first song.  I do know that all 1490+ audience members took to their feet for a good half an hour, which included ‘My Universe’, ‘Friday Night’ and the Paslay co-write from their new (and fifth number one UK Country album), Ten Year Plan, ‘A Bar Without You’.

Phone-torches illuminated the theatre for the beautiful ‘I See Stars’, strengthening a clear love between artists and audience.

Ben, Chrissie and the band (Olly, Charles, Rich and Thomas – thanks to Amanda in The Shires Fan Group on Facebook, for helping my memory out!) played songs from all five albums.  Does anyone else think that ‘Side by Side’, from 10 Year Plan, could easily compete with wedding first-dance favourite, ‘I Just Wanna Love You’ from their 2015 debut album, Brave?

The almost final song of the night, ‘Tonight’, gave us a chance to participate on foregound vocals with either Ben’s oh-oh-ohs or Chrissie’s your mine/I’m yours, depending on which side of the theatre we were sat (I was #teamChrissie).  I’ve never noticed before, but it was a great opportunity for us to oh-oh-oh The Shires back to the stage for an encore, instead of the usually foot stamping I normally hear at gigs, which was a beautiful moment of live music and crowd reaction.

An earlier technical problem meant a song had been missed from the set list, so the Torquay encore was:

I Just Wanna Love You

Chrissie and Ben are on tour for the rest of May and throughout the summer, check The Shires’ website for dates and venues for one amazing live show experience.

In this article:Eric Paslay, The Shires