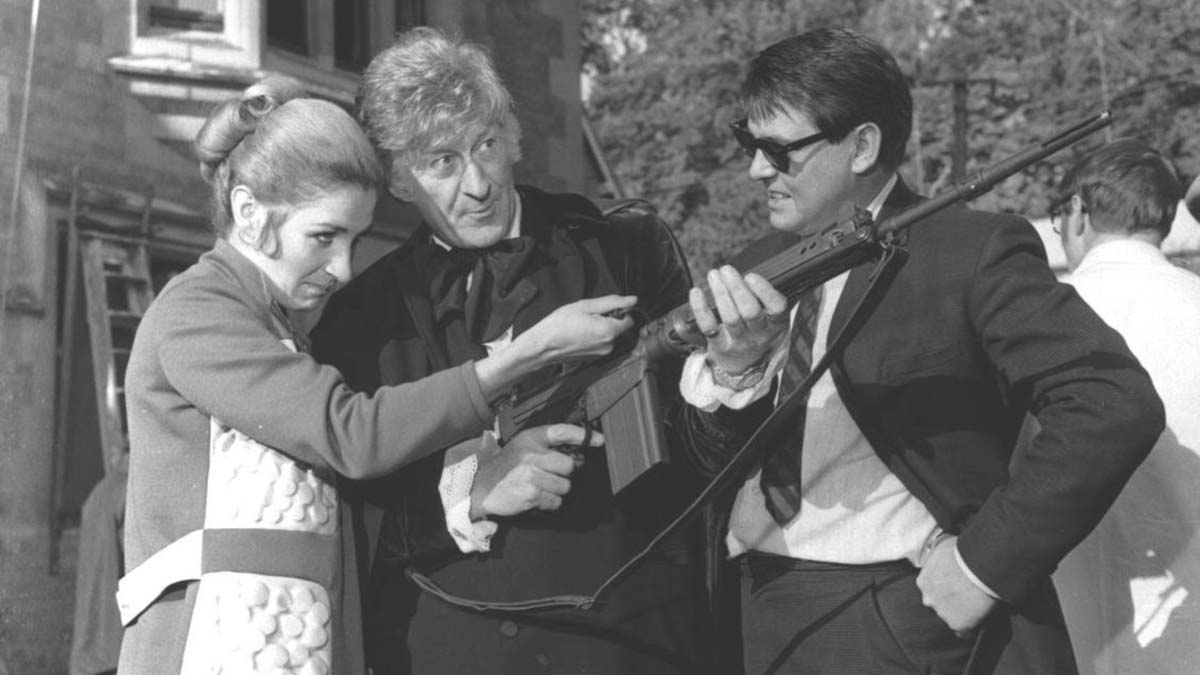 The latest in the fantastic range of Reeltime Pictures’ compilations of ‘Doctor Who’ interviews takes a deep dive into the era of Third Doctor, Jon Pertwee. ‘The Doctors: The Jon Pertwee Years Behind The Scenes Volume 2’ follows Volume 1, which was released last year.

This time it’s the turn of several of the writers who were responsible for creating stories for the Third Doctor to be granted the limelight, as well as a director who brought two of the adventures to the screen, a musician who created some of the era’s eerie, distinctive music, and finally some of Jon Pertwee’s most memorable co-stars.

First up are the Bristol Boys – Bob Baker and Dave Martin. Although their best-known contribution to the ‘Doctor Who’ universe came later with their invention of Tom Baker’s robotic dog companion K9, the writing duo penned three adventures for Jon Pertwee. During an interview lasting 55 minutes, they outline how they came to write television plays for revered actors such as Leonard Rossiter. Their experiences on ‘Doctor Who’ were largely positive, and they explain the origins of ‘The Claws of Axos’, ‘The Mutants’ and ‘The Three Doctors’. You get to find out which line they gave to William Hartnell that didn’t make it into the final cut! At the time of the interview in 2000, Dave Martin had become disaffected with writing for TV, but Bob Baker was working with Nick Park on various high profile ‘Wallace and Gromit’ projects.

The next up is also a writer. Robert Sloman comes across as a modest and philosophical man, who gives his pragmatic views on money and death from his home in Devon over the course of 48 minutes. This is all the more moving for realising that he died the year after he gave these memories of working on ‘Doctor Who’ in 2004. Along the way, he offers his reflections on his contributions, which comprise the classics ‘The Daemons’ and ‘The Green Death’ as well as the less-loved ‘The Time Monster’ and Jon Pertwee’s swansong ‘Planet of the Spiders’.

Writer Louis Marks concludes disc one. During his 52-minute interview, the highly distinguished television writer gives an overview of his childhood and remarkable career. Although he also wrote one story for William Hartnell and two for Tom Baker, his contribution to the Pertwee era is ‘Day of the Daleks’, which returned the Doctor’s deadliest enemy to the screens in 1972 for the first time in colour. Interviewed at home, Marks is relaxed and forthcoming, and even divulges which actor (out of those he wrote for) that he considers best embodied the Doctor…

The second disc opens with director Tim Combe. A young man who was barely out of the BBC’s official training when he was asked to step behind the camera for Jon Pertwee’s second outing in ‘Doctor Who and the Silurians’, Combe outlines with good humour how Jon Pertwee’s amusement over his name helped him to forge a great working relationship with the star. They would be reunited on ‘The Mind of Evil’ the following year. As he had earlier worked on the show as a lowly production assistant, he can also give his views on William Hartnell, whom he considered a lovely but lonely man, and Patrick Troughton. His 55-minute interview is interspersed with convention footage featuring script editor Terrance Dicks and producer Barry Letts.

The penultimate instalment features beloved composer Dudley Simpson, who had retired to Melbourne in his native Australia at the time of this 2005 interview. It proves a classic for those who want to know more about the creative process of getting music from the composer’s head to the screen. Later in the interview, Simpson visits an Australian convention to meet the fans.

The final hour-long segment features some of the guests from ‘Flight Through Eternity’, a ‘Doctor Who’ convention that was held in Gloucester in 2008. Among those interviewed are David Spenser (Thonmi in the Troughton story ‘The Abominable Snowmen’, and writer Victor Pemberton’s partner); Prentis Hancock, whose many ‘Doctor Who’ appearances included Pertwee’s first story ‘Spearhead from Space’ and the classic ‘Planet of the Daleks’; Shirley Cooklin, who played Kaftan in ‘The Tomb of the Cybermen’ and was married to producer Peter Bryant, and Sonny Caldinez, who talks about his first role as Kemel in the Troughton story ‘The Evil of the Daleks’ and how it led to later appearances in the Pertwee era as an Ice Warrior in both ‘The Curse of Peladon’ and ‘The Monster of Peladon’. All of the actors are more than happy to divulge their happy memories of being on the show.

These deep dives into the rich and fascinating history of ‘Doctor Who’ preserve for posterity the memories of those who were responsible for bringing the magical adventures to our screens. As the passage of time dictates, many of the contributors to the interviews are sadly no longer with us, making these thorough and loving records of their views all the more precious and essential. This particular volume is especially commendable for giving writers, often the most unsung of all creatives, their moments in front of the camera. They occupy the entirety of the first disc. Generally introspective souls and less likely to seek out publicity, they manage to overcome their shyness and reticence here. As always, interviewer Nicholas Briggs puts them at their ease and brings out the best in his subjects, maintaining his knack for asking just the right question at the right time.

‘The Doctors: The Jon Pertwee Years Behind The Scenes Volume 2’ is a fine repository of rich ‘Doctor Who’ trivia which demonstrates a reverence for its history. Fanatics will want to add these interviews to their collection to be enjoyed alongside a good few episodes of the very special Third Doctor era of the show that prompted these many reminiscences. After all, Jon Pertwee’s unforgettable portrayal is what keeps our interest in everyone else who was involved in the making of ‘Doctor Who’ in the early 1970s.