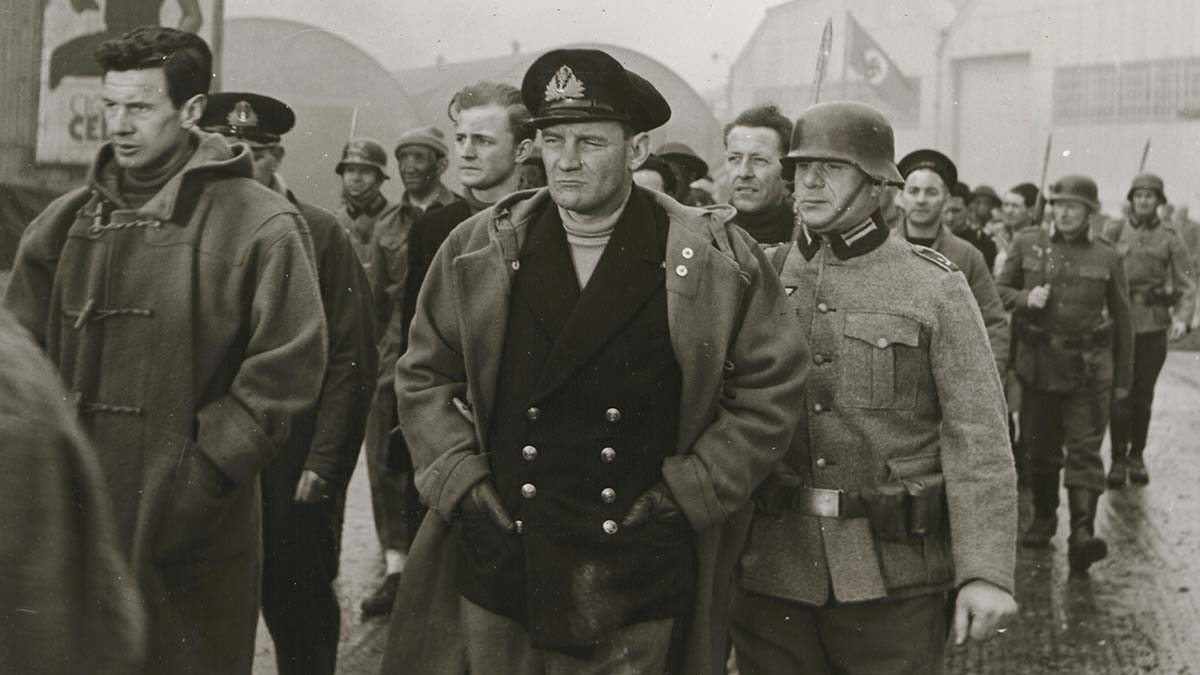 Newly released to Blu-ray is the 1952 British WWII film ‘Gift Horse’. It stars Trevor Howard (‘Brief Encounter’, ‘Superman’) as Lieutenant Commander Fraser, the captain of an American destroyer vessel from the previous war which is re-named HMS Ballantrae. Among his crew are Richard Attenborough (‘Jurassic Park’, ‘Brighton Rock’) and Sonny Tufts (‘Cat-Women of the Moon’).

The film follows the exploits of the disparate seamen both on the high seas and on shore leave, with glimpses into their personal as well as professional lives. Their assignments become increasingly dangerous, but this has the effect of uniting what to begin with is a fractious crew. Finally, they must face their most dangerous mission and use HMS Ballantrae herself to ram a German-occupied dry dock in France and effectively prevent their ships from coming into port.

‘Gift Horse’ is a charming British film of the era. Made less than a decade after the end of the war, when the British population still lived with rationing and there was much post-war rebuilding of major towns and cities still to do, it’s not much of a stretch to recreate the period. Following the trauma of war, civilians needed films of heroic British deeds as succour to make the pain and sacrifice of six hard years of war something to be proud of.

As was the case in the post-war years, there was very little money splashing around, and it’s clear that ‘Gift Horse’ was made cheaply. It’s for this reason that the remarkably crisp and clear restoration for Blu-ray is something of a mixed blessing. In an early scene, a “cast iron” support wobbles as Sonny Tufts descends the stairs. Action sequences in the air and at sea are achieved by intermingling stock footage with studio effects. The sets don’t quite live up to what modern audiences would consider to be cinematic standards. Having said that, a lot of the budget is splurged on the climactic sequences in which model work and controlled explosions around the actors combine effectively.

There’s a lot to enjoy about this cast too. Fraser is the kind of part that the effortlessly stiff-upper-lip, cut glass English accented Trevor Howard could have played in his sleep. He is a rock-solid leading man, and his slightly austere character is gradually whittled down to more human, accessible and admirable layers. Richard Attenborough gives the standout performance of the movie as the working class trade union man Daniels. Ever the consummate professional, Attenborough breathes life into the part, giving Daniels quirks and affability.

It is the quiet, two-hander emotional moments that are the best in the movie. A scene where Bernard Lee (‘M’ in the early ‘James Bond’ films) comforts Attenborough is beautifully played. So too is the gentle romance between Sonny Tufts and Dora Bryan. It’s also not a film to pull its punches about the reality of war. Although signposted from the start of the movie, the point at which Trevor Howard discovers his incalculable loss nevertheless packs a powerful emotional punch.

The film is hardly ‘The Guns of Navarone’ in terms of action, adventure, thrills and spills. ‘Gift Horse’ is much smaller-scale, theatrical and introspective than that. But understood as a slow-burning ensemble piece in which many characters are given their moment to shine, which then builds into a tense climax, ‘Gift Horse’ has a lot to recommend it. True, it takes a while to get going, and there are a few too many characters vying for our attention. But ultimately it does create a compelling narrative that draws in viewers. It boasts fine performances from some of the greatest talents and biggest names in British cinema history.

As so often with British films of this era, it’s fun to count the number of familiar faces you can spot among the supporting cast. Look out for Sid James as a pub landlord, Glyn Houston as an unhappy engineer, original ‘Doctor Who’ companion William Russell as one of the ship’s crew and Olaf Pooley as a German officer.

Extra features include an interesting twenty-minute documentary in which historian James Dorrian recounts how the events of ‘Gift Horse’ are inspired by the real-life Operation Chariot and HMS Campbeltown, as well as a theatrical trailer, archive 1947 footage and an image gallery.