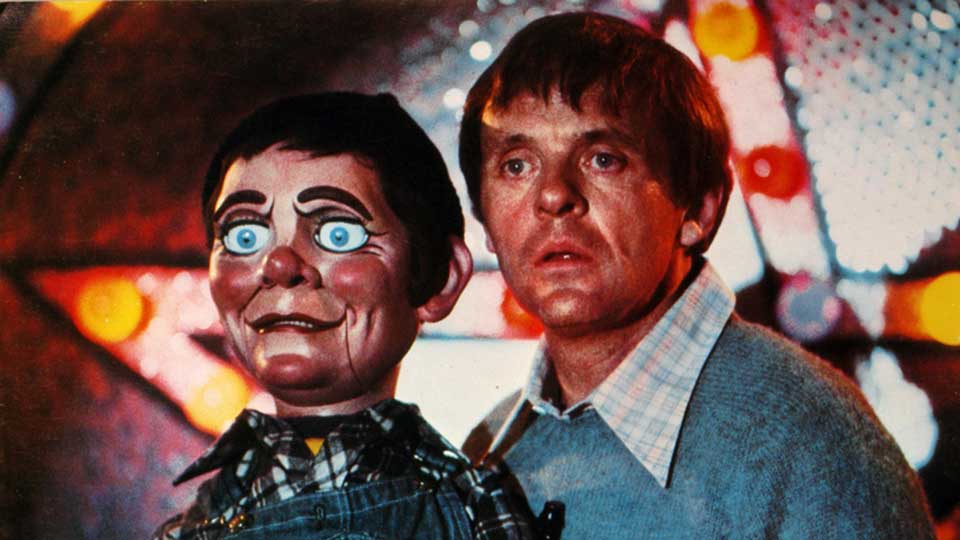 The late 1970s was an interesting period in the career of Anthony Hopkins, one of the most successful British actors of his generation. He retained good looks, an interesting face and piercing blue eyes that helped solidify his leading man status ahead of his second coming as a character actor with Hannibal Lecter. Magic, which was released in 1978, was his second collaboration with director Richard Attenborough in only a few years, following quickly from 1976’s wartime epic A Bridge Too Far.

It’s easy to see why Anthony Hopkins came to be cast as Corky Withers, an up-and-coming ventriloquist. He could play vulnerability and psychotic with equal conviction, and both traits are needed in abundance. William Goldman adapted his own novel for the screenplay. Corky Withers is a failing magician, lacking the confidence to connect with his audience. In a last-ditch attempt, he creates an alter-ego – his obnoxious dummy Fats – who becomes his heckling sidekick. All of a sudden he’s the talk of the town, and a top agent (Burgess Meredith) wants to take him on. A TV pilot is on the cards. All Corky has to do is take a medical test. Only there’s a problem: is Corky in charge of the dummy, or the other way around?

Thematically, Magic is a pleasing amalgamation of established psychological horror tropes. The pleasant young man with a split personality had been examined to great success in Hitchcock’s Psycho, and the ventriloquist losing his personality to his dummy, prior to Magic, was most memorably achieved in Dead of Night where Michael Redgrave played the ill-fated entertainer. As with Psycho, most of Magic’s action shifts to a deserted location, as Corky tries to escape from his problems and reconnect with his childhood sweetheart (Ann-Margret). Although the territory is familiar, the combination of Attenborough’s direction, Hopkins’ powerful central performance and Goldman’s tight script ensures that the tension remains high throughout.

Two of the most memorable scenes concern Fats’ control of Corky, one in which he orders him around like a puppet, and again when the agent asks Corky to make Fats shut up for five minutes. An increasingly sweaty and agitated Corky keeps asking how much time has passed as the agent coolly observes his new act self-destructing into a full-blown mental health crisis in front of his eyes. The film is worth seeing for those moments alone. But the small cast and quiet, rural setting benefit the slow build of creeping menace. Magic really is the sum of its parts.

Anthony Hopkins gives a masterful and memorable performance as Corky – and his successful collaborations with Attenborough would continue with 1993’s Shadowlands. Ann-Margret is perfectly cast as Peggy Ann, Corky’s love interest, and there is great chemistry between the two. Burgess Meredith was great in everything he touched, but he is good enough to compete with Hopkins in every scene he graces.

Magic looks magnificent in high-definition Blu-ray. This is especially welcome because the DVD release of a few years ago was a poor-quality print, so this new edition really is the best way to enjoy the movie. There are a host of extra features on the disc for enthusiasts of behind-the-scenes. Screenwriting for Dummies will be valuable to budding screenwriters. Author William Goldman talks about where the idea for the story came from, and how the screenplay differs from his novel. He also discusses working with Attenborough and Hopkins, and gives his verdict on the finished product. Fats and Friends is a feature on ventriloquism which includes the man who tutored Hopkins for the part – it ties in with the creepiness and our unease with dummies and marionettes. Anthony Hopkins is interviewed for Italian television, and demonstrates the coin trick he learned for the part, while there are shorter segments on cinematographer Victor Kemper and Ann-Margret as she prepares for a scene.