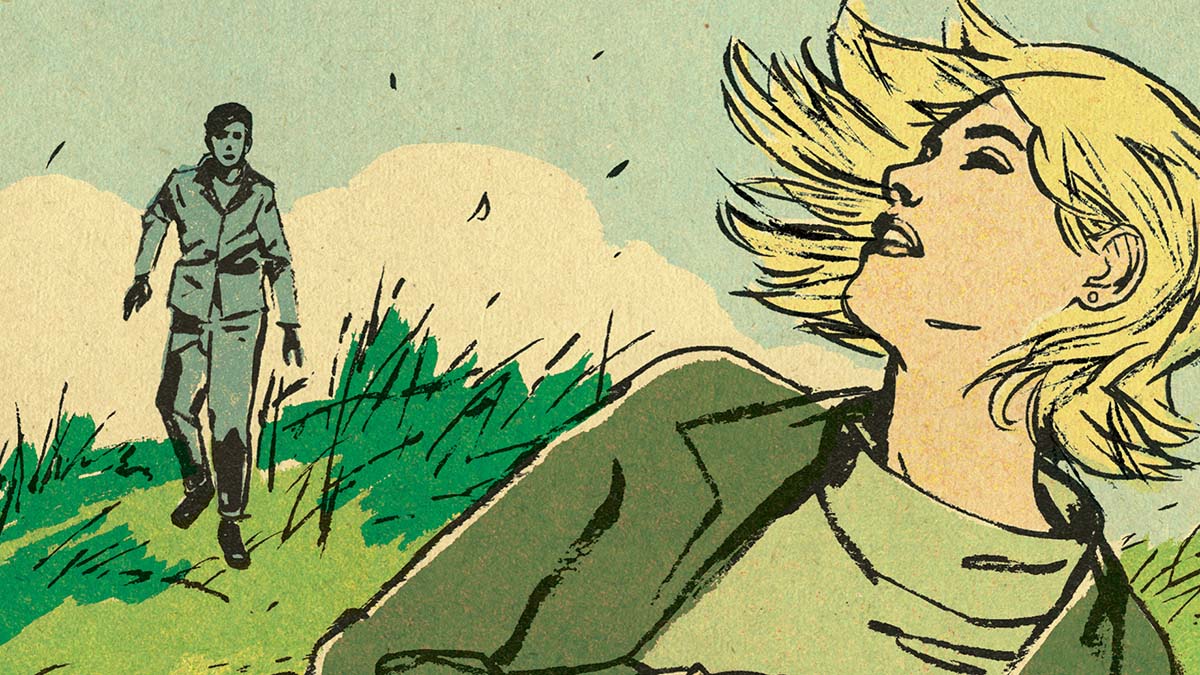 English novelist John Wyndham is one of the most celebrated of Twentieth Century science-fiction writers. His often dystopian novels are infused with Cold War-era paranoia, and the genuine real-life fears that ordinary people lived with during the 1950s when this trio of classic titles first appeared. ‘The Day of the Triffids’ (1951) perhaps his best-known novel, is included in this box-set, along with ‘The Midwich Cuckoos’ (1957) and ‘The Chrysalids’ (1955). The Folio Society’s ‘The Wyndham Collection’ unites these three books and presents them in a card case. A hand with five fingers and one thumb (see ‘The Chrysalids’) is the striking image embossed on the cover. Their stylistic similarity, each enlivened by Patrick Leger’s illustrations, provides an aesthetically-pleasing uniformity whilst recalling the decade in which the novels were published.

‘The Day of the Triffids’ is perhaps Wyndham’s most-adapted novel, with many big and small-screen dramatisations (the most faithful remains the BBC’s 1981 mini-series). The novel, like the others in this collection, illustrates precisely why John Wyndham’s works, although inevitably influenced by the period in which they were written, transcend their own time and speak with clarity to successive generations. It is extraordinary to contemplate that, at a time when newspaper headlines and the political discourse have centred on the threat posed by reliance upon Russian energy as we recover from a pandemic that originated in China, ‘The Day of the Triffids’ posits very similar scenarios. Protagonist Bill Masen suspects that the Triffids were bioengineered in the USSR, perhaps as a biological weapon, yet they escaped from the laboratory. Nevertheless, they can be harvested for their useful and adaptable oil, leading to western societies becoming increasingly dependent upon them, despite their natural danger. The high concept of the novel proves how perennial discussions about our harvesting of the planet’s resources for energy and the inherent risks and threat to life truly are. What’s so clever about Wyndham’s set-up is that the carnivorous plants only become lethal to human life by accident, when their growth and spread can no longer be contained after most of the world’s population becomes blind. But what caused the lights in the night sky that destroyed the retinas of the onlookers? Was it human agency? In an age when we worry about cyber warfare and remain terrified by the threat of nuclear war, the dangerous, bleak and claustrophobic England that Wyndham creates for his novel feels disturbingly relatable.

If humanity can be said to be locked in a war against the killer plants, then like all mortal enemies, they lack mercy or sentiment. In one truly terrifying moment, Bill stops to save a little girl from certain death as a triffid stands over the body of her younger brother. It’s the sort of scene that could only have been written during a time when civilisation was still scarred by all-too-recent memories of universal conflict and the horrors that World War Two produced. Unlike the other two novels in this collection, Wyndham offers his readers no closure by the final page. Rather, we are left with the promise of humanity regrouping to look for a solution. Despite that, there’s no obvious route out, and therefore very little hope. The starkness of the fate of humanity is thus underlined, and ‘The Day of the Triffids’ remains one of the most chilling books you’ll ever read.

There is a similarly high concept for ‘The Midwich Cuckoos’, which takes place in the eponymous fictional quiet English town. The after-effects of a strange occurrence is that every woman in the town falls pregnant. However, after they give birth to golden-eyed, blonde-haired, silver-skinned babies, it’s clear that they have simply been surrogates for another species (hence the brilliant title). Many exceptional horror stories (consider films like ‘The Omen’, ‘Rosemary’s Baby’ and ‘Alien’) prey upon our deep-rooted fear of giving birth to evil or something alien. ‘The Midwich Cuckoos’ arguably takes this primal fear even further. In the era of western panic over ‘Reds under the bed’, when militaries were deeply concerned about infiltration by enemy agents, it also played up Cold War fears for Wyndham’s original readers. What if we have been compromised? What if our own child is one of them?

Although ‘The Midwich Cuckoos’ has a high concept which is developed satisfactorily, it isn’t quite as compelling as ‘The Day of the Triffids’. I read both novels as a child, when I had virtually no understanding of the Cold War, so I took the stories entirely at face value and found ‘The Day of the Triffids’ far more gripping. I had the same response when revisiting the tales as an adult. The reason is that readers grow to care about Bill Masen and his partner Josella as they flee London and the dreaded Triffids. The enigmatic Coker, who first seems to kidnap and exploit them but later becomes an ally, is an intriguing character. By contrast, the narrator of ‘The Midwich Cuckoos’ is often absent from the action he is describing, and the characters we are asked to follow are usually bureaucratic scientists. Readers are not often enough fully immersed into the world of the story. Although the novel isn’t faultless (perhaps most problematically, the first half is stronger than the second), the concept and the intrigue over how the premise will play out are more than enough to hold any reader’s attention.

By contrast, ‘The Chrysalids’, which I came to for the first time for this review, is an immediately engaging read. It is set in post-nuclear fallout Canada (the devastation of war is given the religious title of ‘Tribulation’), in a deeply religious community. The story is narrated by David, a boy who is growing up in a household where he has learned to hide his thoughts from his fundamentalist father. The community strives for biological conformity among all of its species. Any even relatively minor genetic defects are considered blasphemies, and legally have to be reported to the Inspector, who can decide whether or not each organism has been made in the image of God. If not, well…

David befriends Sophie, whose family lives on the outskirts of the community. When she loses a shoe, David spots in her footprints that she has six toes. He instinctively understands the danger that places his friend in, yet his obligation is to report her to the authorities as a blasphemy. Yet David is beginning to learn that there is something a little different about himself too, and his younger sister Petra. Fortunately, telepathy cannot be seen. Nevertheless, if their gift is uncovered, they too will be condemned and outcast. David makes the moral choice to defend his friend and seek a way out of the austere, controlled society he knows he doesn’t belong to.

The child leads in ‘The Chrysalids’ are appropriate. It’s often said that bigotry is learned rather than inherent, so the youngsters are naturally more accepting of difference among others. It is a strong coming-of-age story too, with the youngsters converging on their own senses of identity. The world of Waknuk created by the author is immediately recognisable in highly religious societies to this day. At the time, the novel was a comment on the social hysteria and purity tests of McCarthyism and the witch-hunts of 1950s America, as well as a reflection on the grotesque search for racial purity and the extermination of undesirables perpetrated by the Nazis in the 1940s.

The story remains a compelling analogy for those who seek and fight for freedom from stifling conformity – a concept that transcends times and cultures. ‘The Chrysalids’ is much subtler and cleverer than a superficial reading may suggest. The ending of the novel is intriguingly morally ambiguous, and the themes invite long analysis and reflection. In ‘The Chrysalids’, Wyndham perhaps examines most closely the fragilities of the human psyche. As David explains to his sister: difference makes people afraid, and when they’re afraid they become cruel and seek to destroy. “It’s the way things work,” David reflects. “You’ll understand better when you’re older.”

‘The Wyndham Collection’ is a thought-provoking and troubling collection of novels that are nevertheless timeless, exciting and unforgettable. In the seven decades since they first appeared, and over fifty years after John Wyndham’s death, his works still provide incisive commentary about the human condition, our place in the world, the fragility of civilisation and the precariousness of all our futures. This is a welcome re-issue by The Folio Society. Discover for yourself three stonewall classics of the science-fiction genre. These titles have inspired myriad authors and film-makers ever since, whose dystopian tales of our post-apocalyptic world to come all borrow at least something from the original master. Incisive introductions by Adam Roberts provide useful context for each work, and the stark colour illustrations by Patrick Leger keep readers rooted in the decade in which these novels were written. This collection is a celebration of John Wyndham’s breathtaking imagination and ability to focus in on the most profoundly troubling questions that, all these years later, we’re still wrestling with and running scared of the answers.

The Folio Society’s three-volume set of John Wyndham’s novels, The Wyndham Collection, introduced by Adam Roberts and illustrated by Patrick Leger is available exclusively from www.foliosociety.com.

In this article:John Wyndham, The Chrysalids, The Day of the Triffids, The Folio Society, The Midwich Cuckoos, The Wyndham Collection