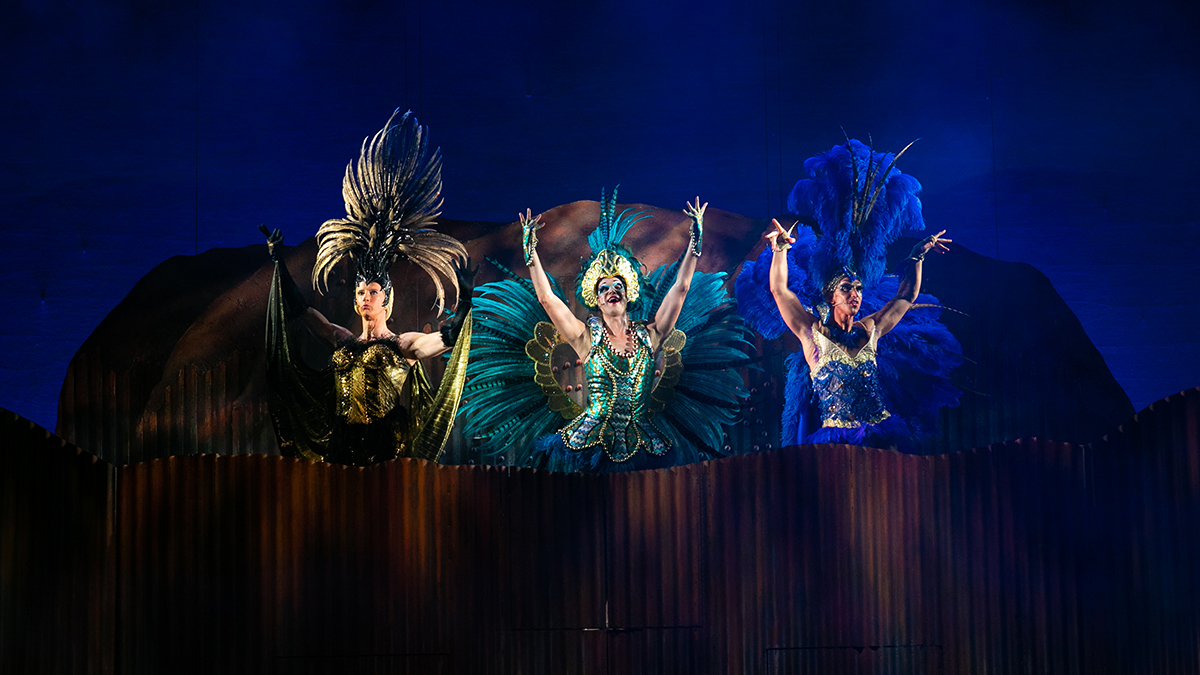 Hit antipodean jukebox musical ‘Priscilla Queen of the Desert’, based on the 1994 film, has parked its pink and glittery bus at the Churchill Theatre, Bromley. It’s here this week as a pitstop in its national tour.

Camp, outrageous, sassy and fun, ‘Priscilla Queen of the Desert’ tells the story of three drag queens who travel into the Australian outback. Tick (Edwin Ray) wants to see his improbable wife again, so that he can meet the son who has started to ask who his father is and what he does for a living. The absent father’s existential crisis about that is what drives the plot, and the fact that his wife has arranged a performance at the other end is their motivation for arriving. Thus, with his two besties by his side, the feisty and OTT Adam (Nick Hayes) and the older, dignified transwoman Bernadette (Miles Western), they pack ‘Priscilla’ (their tour bus) with feathers, frocks and frills, and hit the road.

Naturally, their trip isn’t adventure-free, and they meet both friends and enemies along the way in this unconventional buddy story of self-discovery. ‘Priscilla Queen of the Desert’ is a heartwarming tale, and it’s impossible not to fall in love with the main characters. In this production, they are expertly played. Nick Hayes bags the lion’s share of the laughs, but then his character Adam/Felicia has most of the best lines and zinging put-downs. They all have their moments to shine. Miles Western captures the tenderness and romanticism of Bernadette, and his rendition of the Richard Harris standard ‘MacArthur Park’ (or perhaps it’s the disco version by diva Donna Summers they have in mind…?) during a champagne and cake night with Bob the mechanic is an especial highlight. Shame the cake was left out in the rain. Edwin Ray as the more straight-laced Tick is the glue that binds the production together, but the emotional payoff for his family reunions are well worth the wait.

This production, directed by Ian Talbot, is appropriately fast-paced and upbeat, like the disco soundtrack that accompanies it. Outstanding backing singing truly bring the classic hits to full-throated life. The costumes are suitably outlandish, colourful and garish, and some costume changes are conducted with mind-blowing speed, all to keep the frenetic pulse of the show racing. There are plenty of laughs to be had along the way, and the jokes that landed the best last night had everyone chuckling in unison. The good will between actors and audience meant that they were feeding positivity off one another, and it’s a great live entertainment experience when that happens. The show’s adult themes and sexual innuendo mean that it isn’t age appropriate for younger children, but its naughty pantomime vibes have broad appeal. We saw families with older children enjoying their outing during the interval.

As for it’s moral heart, nobody in the audience wasn’t on board with its message of loving and accepting people for who they are. Yet already, one can look at this fabulous pre-woke age show with a touch of misty-eyed nostalgia. ‘Priscilla Queen of the Desert’ is probably an approximation of what most people still think of in terms of gay culture: brash, fun, provocative and hedonistic. It is a shame that this outward-facing and largely tolerant world has been largely replaced by one of priggish censoriousness, ruled by witchfinder generals enforcing complete obedience to pseudo-religious ideology and rooting out dissidents for shaming and cancellation. It won’t be long before the casting choices of future productions are vigorously policed by professional offence-takers, and elements that may be considered racial stereotyping (harmless though they are) end up being cut. It’s worth the diversion to say, enjoy ‘Priscilla Queen of the Desert’ in all its unashamed splendour whilst we are still allowed to laugh at ourselves, and before the world it presents becomes entirely verboten.

I’m told that some of the Kylie songs referenced in the show are anachronistic, as they hadn’t been released at the time in which it’s set, but that will only rankle with purists. My only real criticism was that, in order to make way for the set-pieces of the songs, which take up much of the performance time, the story is told in broader brushstrokes than it is in the film. The homophobic rural-dwellers are never anything more than caricatures, but it’s enough to get the point across. For that reason, it helps if you’re already familiar with the story to appreciate its subtleties. But the uninitiated can enjoy it for what it is: camp and feel-good entertainment with an uplifting message. Audience reactions speak volumes, and last night’s packed house loved it from start to finish. By the time of the walkdown prior to the curtain call, involving a staircase lit up like a Christmas tree, a standing ovation was already underway. Put on your best heels and catch it while you can.