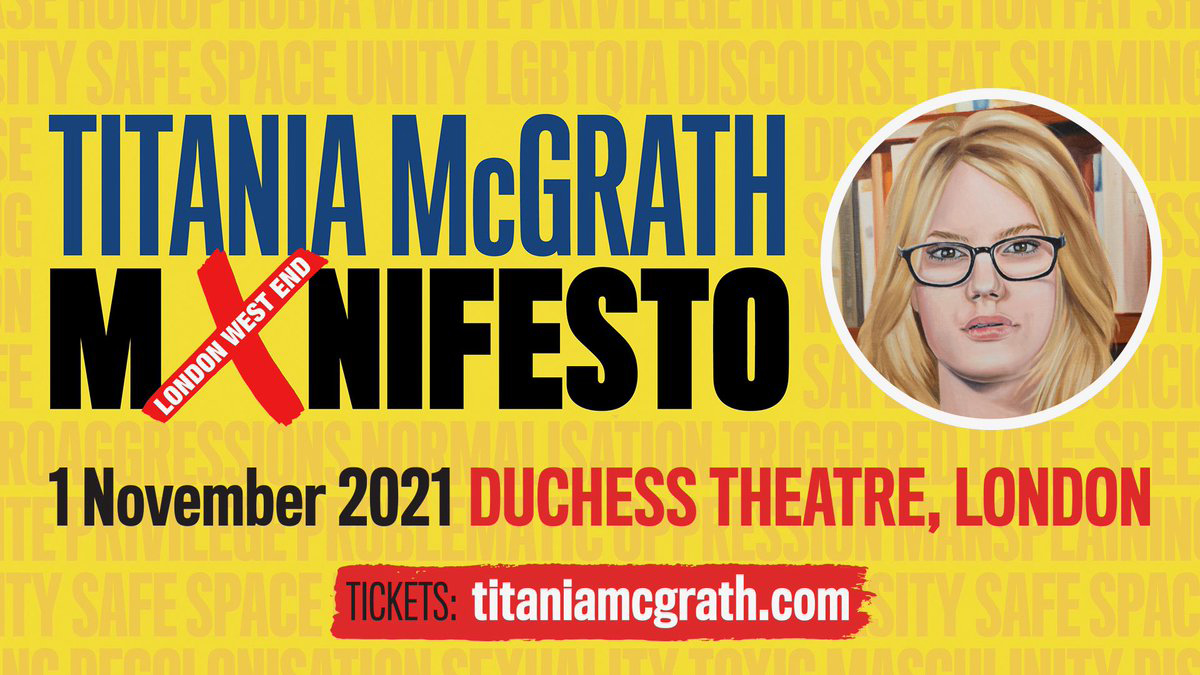 We were invited to the Duchess Theatre in London to join comedian Andrew Doyle and his Social Justice Warrior alter-ego Titania McGrath (played by Alice Marshall) for one night only of comedy and satire. It followed a sell-out run at the Garrick.

‘Mxnifesto’ is your invitation to be indoctrinated into the world of woke and be told what opinions to think and how to avoid being a fascist. Your instructor for the evening is none other than Titania McGrath, transposed from the digital world of Twitter to be embodied in all her self-righteous glory on the stage.

The first act of the show is a forty-minute set of stand-up by Andrew Doyle, who, in his natural environment in front of a live audience, explains how he came to create Titania. The world went a bit mad, he recalls, at the time of the Brexit referendum. It was increasingly hard not to notice a growing intolerance for those with different political opinions, at the same time that the obsession with intersectionality spread like a virus. Titania is a satirical reaction to that, and as such, Doyle has his finger on the pulse of the culture wars.

His observational intelligence and quick wit are in evidence in his stand-up, too. The topics Doyle holds up for scrutiny and mockery are those most likely to baffle or irritate anyone over the age of thirty-five. As he is gay, he’s perhaps on safe ground examining the sub-categories of gay men, noting that the purported common ancestry between ‘otters’ and ‘bears’ betrays a lack of zoological knowledge. The absurdity of the new rainbow flag is mercilessly exposed, and so too is the concept of any form of functioning ‘community’ united only by a shared sexuality. There were quite a few of us outcasts in the house last night. But Doyle carries his withering critiques off with an air of exasperated geniality that must surely win over even those most determined to take offence. In that way, he is the perfect foil to Titania McGrath. With the naturally affable Doyle having sufficiency warmed up the audience, he leaves us in the capable hands of his alter ego for the second act.

After the interval, it’s all Titania. Alice Marshall embodies the part of the haughty, arrogant and opinionated grotesque from the moment she strides onto stage. The contrast with the winsome Doyle could not be more marked. Although we are left in the company of a horrendous character, the material is great, providing plenty of opportunities to laugh at her, and never more so than when she is performing her slam poetry: it’s a rare skill to be able to write such vulgar yet fluent doggerel. This was the longest time I had spent in the company of the insufferable Titania since reading ‘Woke – a Guide to Social Justice‘. At least I could put the book down when her Messiah complex became too much. Last night there was audience participation, and I actively shrank in my seat as she came looking for males to humiliate and improve live on stage.

The topics that you might expect abounded. Patron saints of progressives, Meghan Markle and the Doom Goblin herself (Greta Thunberg), are easy targets for satire, but Doyle knows how to wring the most out of his material. At one point, Titania even finds a contemporary way to defeat Hitler. Ingenious use is made of overhead projections and judiciously photoshopped images. Strutting her way through each segment, Alice Marshall never lets her characterisation slip. There is a synchronicity between performer and writer. The script is interpreted with the broad brushstrokes necessary for satire, but with fidelity and an intuition for how to work the audience that not all comedy performers possess. Her sanctimonious addition of, “You’re welcome” after imparting each pearl of wisdom is both toe-curling in its satirical accuracy and delivered perfectly enough to elicit a laugh each time.

There are a few niggles. Not every joke lands. That’s not a huge problem, because the hit to miss ratio is high in favour of palpable hits. I can safely say I haven’t laughed so much, and for so long, for quite a few years (but then I don’t get out much). It is a touch on the long side, with perhaps one too many instances of audience interaction. A subplot involving Titania’s Eastern European assistant feels unearned, and is introduced as a way of ending the show, rather than building up as a natural progression from earlier scenes.

Ultimately, the success or failure of any comedy show is in the response it evokes in its audience. Last night, we were laughing for over two hours, and there was a palpable buzz after the curtain call as the audience filtered out. Sure, the overall structure could be tightened and fine-tuned here and there, but Doyle’s script is killingly funny, and boy does Marshall sell it. On reflection, there was too the sense of solidarity, which is not a word I’m moved to use very often. If you ever wonder if it’s just you, or if the world really has gone stark staring mad, where the obsessions of so many intersectional activists seem crazy and narcissistic, then Titania McGrath’s ‘Mxnifesto’ is the perfect tonic. The show is group therapy, providing an antidote to wokery wrapped up and delivered as devastatingly funny satire. Laughing along with others who baulk at the mad contradictions of progressives is a priceless, unifying and worthwhile experience.

‘Titania McGrath Mxnifesto’ is a great night out for those of us still staunchly resisting the woke onslaught. I hope that the show, or another vehicle for Titania McGrath, returns to the stage again soon. There is clearly an appetite for it. The talents of Doyle and Marshall combine brilliantly. And since gender and identity politics will continue to derange us for years to come, some outlet for mockery will continue to be crucial. Titania McGrath is shaping up to be a Frankenstein’s monster, taking on a life and power of her own. But Andrew Doyle need not underestimate the public service he is providing by nourishing her and feeding her insatiable ego.