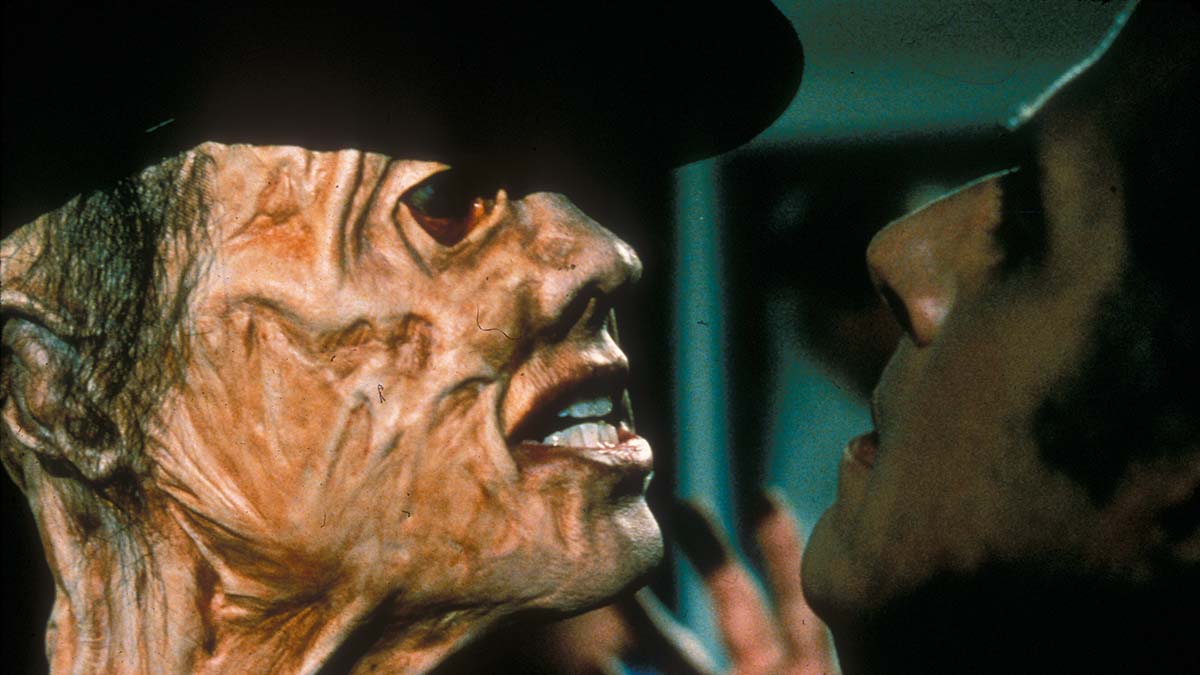 Grieving after losing her boyfriend Eric (Derek Rydall) in a tragic fire, Melody (Kari Whitman) starts to suspect that he may not be dead after all when she starts receiving romantic gifts. A shopping mall has been built over the ruins of Eric’s former house and as it gears up for a grand opening, a shadowy figure stalks around inside and starts murdering people. Is it really Eric or is someone getting revenge for him? Melody teams up with reporter Peter (Rob Estes) to find out.

‘Phantom of the Mall: Eric’s Revenge’ was originally released in 1989 and it has received a brand-new restoration courtesy of Arrow Video. Showing as part of the digital Arrow Video FrightFest this week, the new restoration has received its World Premiere, and it’s a real throwback for fans of 80s horror. I should say from the outset that ‘Phantom of the Mall: Eric’s Revenge’ isn’t exactly a classic in the genre. In fact, the reviews over the years have been positively scathing citing a number of issues that critics have had with the film.

Having never seen it before, I went into ‘Phantom of the Mall: Eric’s Revenge’ with an open mind and honestly, it really wasn’t as bad as people have made it out to be. Perhaps the biggest problem with the film is that there is zero suspense as you know from the very beginning that the killer is Eric and that he didn’t die in the house fire. That makes it a little odd that the film spends so much time on Melody and Peter investigating who the murderer is because there’s no surprise reveal to look forward to.

The film also hits most of the horror tropes you’d expect something from the 80s to hit. There’s nudity for no real reason, over-the-top death scenes and a barely-there plot that just about threads a narrative through the slaughter-fest. What people seem to forget though is that you wouldn’t choose to watch a film like this unless that’s exactly what you wanted to see so you can’t really say the film doesn’t deliver on its promise.

The actors do a solid enough job. This isn’t the kind of film that requires Oscar-worthy performances so Kari Whitman and Rob Estes are perfectly watchable as the leads, while Derek Rydall just about stays on the right side of OTT as the aggrieved Eric. There are some nice supporting roles for Morgan Fairchild and Ken Foree too, adding to the overall fun and nostalgia.

‘Phantom of the Mall: Eric’s Revenge’ is a throwaway popcorn horror movie. It’s most definitely not a classic but it’s entertaining and I can imagine it being a fun watch with fellow horror fans. What the film lacks in sophistication and logic, it makes up for in pure 80s horror fun, and honestly I didn’t mind it. This restoration from Arrow Video makes it look and sound the best it ever has too!

‘Phantom of the Mall: Eric’s Revenge’ will be released on Blu-ray via Arrow Video on 22nd November 2021.