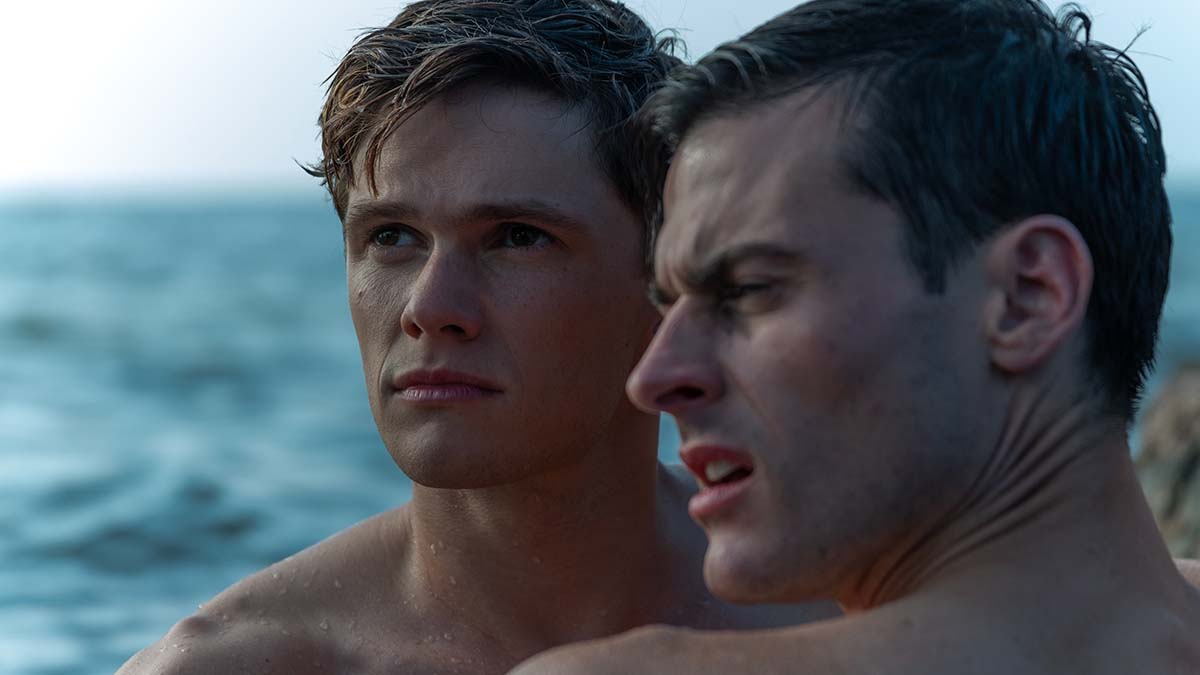 Based on a true story ‘Firebird’ tells the story of Soviet Air Force conscript Sergey (Tom Prior) who falls for fighter pilot Roman (Oleg Zagorodnii). The two men embark on a forbidden affair in the 1970s until someone files an anonymous report that threatens to end Roman’s career. Despite being in love with Sergey, Roman turns his affections to Sergey’s best friend Luisa (Diana Pozharskaya) in a bid to hide his true sexuality and keep hold of his burgeoning career.

‘Firebird’ has been touring the festival circuit and this month it’s being shown as part of Outfest. Directed by Harvard alumni Peeter Rebane, who wrote the screenplay with lead actor Tom Prior, ‘Firebird’ is an emotional drama that exposes how difficult it was for gay men under the Soviet regime (not that a lot has changed since the 1970s on that front). It’s fair to say that this story has been told countless times before and it definitely brought to mind the BBC mini-series ‘Man In An Orange Shirt’, but ‘Firebird’ is such a well-made film that its lack of originality doesn’t really matter.

It’s clear from the moment Sergey lays eyes on Roman that he’s head-over-heels and it doesn’t take long before the two men are spending plenty of time together behind closed doors, and enjoying trysts in the sea away from prying eyes. Sergey is more comfortable with his sexuality and often bears the brunt of Roman’s anger, particularly when their affair threatens to become public. Sergey is keen for the two of them to leave the Air Force and start a new life together, but Roman is more concerned with saving face and progressing in his career. That creates a conflict that runs throughout the film.

Things get further complicated as the film moves on in time and Roman marries Luisa, breaking Sergey’s heart in the process. The second half of the film focuses on the ways Roman and Sergey fall in and out of each other’s lives, with Roman betraying Luisa to be with his true love, Sergey. The love triangle is very much the centre of the film and it’s a shame that we don’t get to know as much about Luisa as we do Sergey and Roman. It would have hit harder emotionally had the audience been able to sympathise with Luisa more but the character isn’t developed in the same way as Sergey or Roman.

The film benefits from stellar performances from all three of its leads. Tom Prior is a revelation as Sergey, really convincing as a wide-eyed and naïve conscript while Oleg Zagorodnii perfectly brings Roman’s battle to the fore, making you feel sorry for him. Rounding out the trio is Diana Pozharskaya, who doesn’t get as much screen time (as I mentioned earlier) but her performance packs a punch in later scene where she speaks plainly with Sergey. It’s one of the film’s most heartbreaking moments.

‘Firebird’ is a stunning film. The story may feel familiar but in the hands of director Rebane and with three leads as good as this, you’ll get lost in its charm. I felt a series of emotions during the film from happiness to tears, and I found myself thinking about it for a while after it finished. With impressive cinematography, a solid script and knock-out performances, ‘Firebird’ is a film you simply must see as soon as you get the chance.