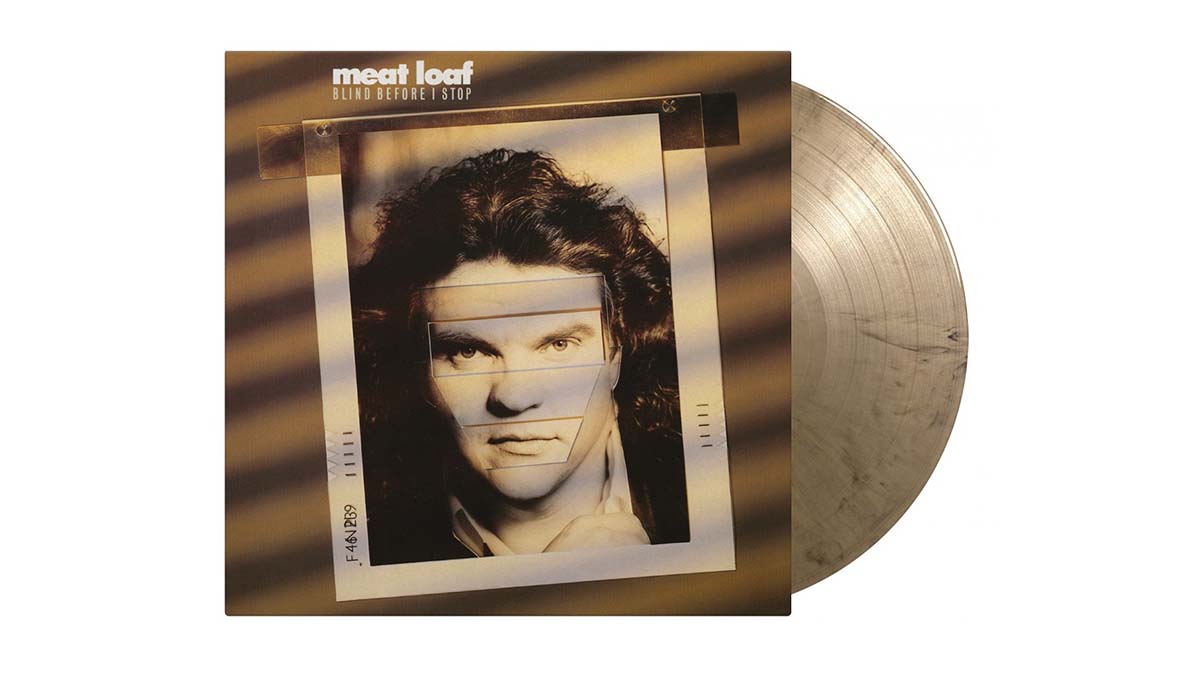 With a career spanning six decades Meat Loaf is without a doubt one of the most iconic performers that rock music has ever seen. His huge-selling debut album ‘Bat Out of Hell’ was released in October 1977 and has sold an estimated 50 million copies across the world. While that album remains the biggest of his career, Meat Loaf has enjoyed plenty of success mostly notably with ‘Bat Out Of Hell II: Back Into Hell’ in 1993, ‘Welcome to the Neighbourhood’ in 1995 and ‘Bat Out Of Hell III: The Monster Is Loose’ in 2006. Those albums are often the ones in the rock star’s catalogue to be celebrated but Music On Vinyl has released a limited edition release of Meat Loaf’s fifth studio album ‘Blind Before I Stop’ to mark its 35th anniversary.

Limited to 2,000 copies and pressed on 180g gold and black marbled vinyl, ‘Blind Before I Stop’ is perhaps one of Meat Loaf’s lesser-known records. The follow-up to 1984’s ‘Bad Attitude’, ‘Blind Before I Stop’ arrived in 1986 but it never spawned a significant hit on either side of the Atlantic. Produced by Frank Farian, the record featured no collaborations with Jim Steinman and it was Meat Loaf’s first to fully embrace the sound of the 80s at the time. While the rock sensibility that the singer is known for is present, it competed with synth chords and samples, which led to a less enthusiastic response from the critics.

There’s no denying that Meat Loaf is at his best when he’s working hand-in-hand with Steinman but that’s not to say that ‘Blind Before I Stop’ isn’t an enjoyable album. The lengthy opener ‘Execution Day’ features Meat Loaf’s distinctive growling vocal and it’s one of three songs on the record he co-wrote. It’s a progression from the work he did with Steinman, and you can hear that theatrical influence throughout the song.

The foot-stomping hard rock of ‘Rock ‘N’ Roll Mercenaries’ with John Parr is an early highlight on the record. A raucous celebration of all things rock ‘n’ roll, the song is a perfect 80s rock song that you can’t help but lose yourself in. ‘Getting Away With Murder’ is one of the songs that truly embraces the sound of the time, pairing Meat Loaf’s vocals with a stronger groove than fans were used to hearing. For me, it works but it is pretty different.

Elsewhere on the record ‘One More Kiss (Night of the Soft Parade)’ is a stirring ballad that really showcases Meat Loaf’s voice, title track ‘Blind Before I Stop’ is a balls-to-the-wall storming rocker that celebrates rock music and sex, and ‘Masculine’ explores the facets of being a man. The album comes to a close with ‘Rock ‘N’ Roll Hero’, a song that starts with an epic guitar solo, before guitars give way to Meat Loaf’s voice as he pays homage to his love of rock ‘n’ roll.

For this limited-edition release, Music on Vinyl has included a double-sided insert with the lyrics for all of the tracks printed on it. It’s a shame that this isn’t a gatefold and there isn’t more artwork to enjoy, but the sound quality of the vinyl and the eye-catching marble effect should be enough to keep fans happy.

‘Blind Before I Stop’ may not be Meat Loaf’s best album but it’s actually aged better than I expected it to. At the heart of the record, as with all of Meat Loaf’s material, is his big theatrical voice and that sounds magnificent across the 11 songs here. If you’ve never stepped out of the most celebrated Meat Loaf records, you should pick up a copy of this album, if for no other reason than to hear a different side to the rock star. ‘Blind Before I Stop’ is an interesting experiment and it deserves to be more than a minor footnote in Meat Loaf’s incredible career.