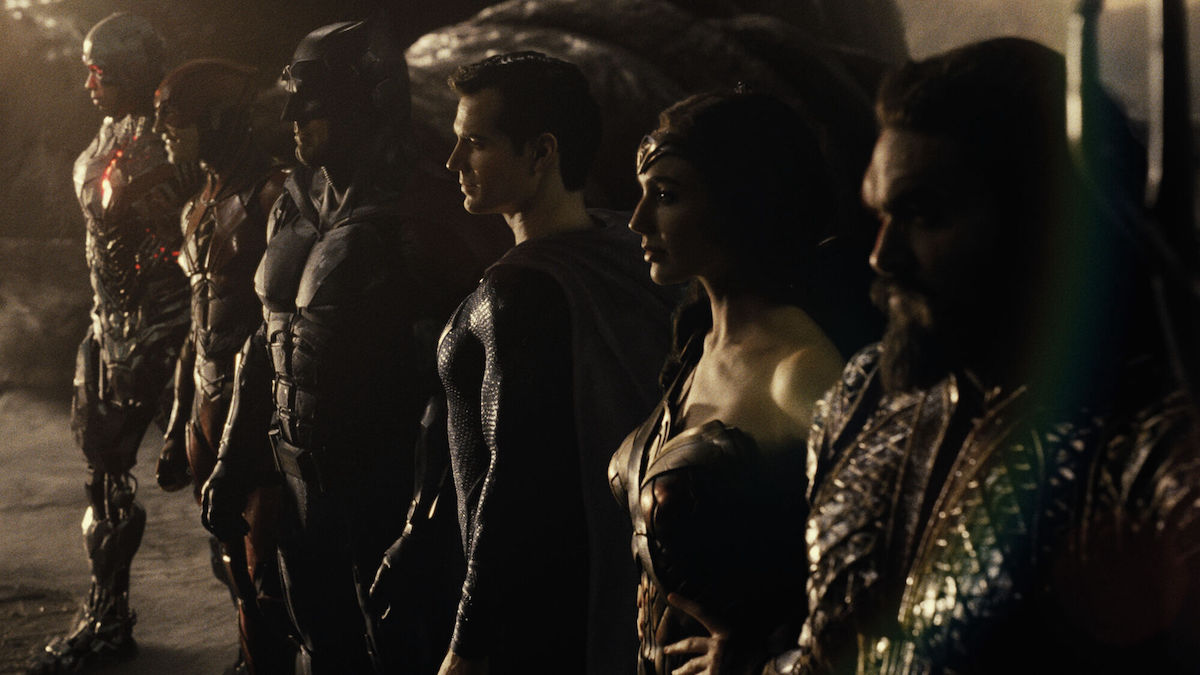 I’m assuming if you’re here reading this, you are aware of how this film came into existence, so I will dispense with the long-winded history lesson. All you really need to know is that a personal tragedy led to director Zack Snyder leaving Justice League unfinished, and a nervy studio—battered and bruised by the critical response to ‘Batman v Superman’—decided to make some changes. The resulting film was a car crash. This led to a movement driven by the fans to have Snyder’s vision restored and his original cut (aka #TheSnyderCut) released.

For better or worse, his vision has finally been realised. We now have ‘Zack Snyder’s Justice League’, and the theatrical release can be consigned to the garbage bin of cinematic history where it belongs. So, what exactly does ‘Zack Snyder’s Justice League’ bring to the table? Well, for starters it’s in 4:3 Academy ratio, which you tend not to see in ginormous special effects laden blockbusters, but whatever, let’s go with it. It’s structured like a novel, with six separate chapters bookended with a prologue and epilogue. And it’s four fucking hours long.

Following the death of Superman, the Mother Boxes have re-awakened. Three mystical machines of unknowable origin and power, which are coveted by the tyrannical supervillain Darkseid – whose presence on Earth was foretold in Bruce Wayne’s prophetic visions in ‘Batman v Superman’. If Darkseid claims all three, he will destroy the planet, transforming it into a scorched hellscape likeness of his home world Apokolips. Still with me?

He sends his lieutenant, Steppenwolf to Earth in order to retrieve the Mother Boxes. Meanwhile, Bruce Wayne (Ben Affleck) sets about recruiting a team of metahumans strong enough to protect the Earth from Steppenwolf and Darkseid. These include Wonder Woman (Gal Gadot), Aquaman (Jason Momoa), The Flash (Ezra Miller), and Cyborg (Ray Fisher).

Judging this film against the 2017 cut is not a difficult task. ‘Zack Snyder’s Justice League’ is an objective improvement on what came before. It is more coherent and consistent, and based on social media reaction, the fans who were so appalled by the theatrical cut do seem to be appeased by this new version. I’m happy for them. But mostly I’m happy for Ray Fisher, whose tragic character, Cyborg is restored to the heart of the film, and given an actual arc instead of the afterthought he appeared as in the 2017 cut.

There’s also an epic sense of grandeur to the film—as there should be having all of these titans of DC history on screen together—which was missing in the previous cut. The score by Tom Holkenborg is sensational, and whilst not all of the special effects are as smooth as I’m sure Snyder would have wanted, he still delivers an impressive spectacle. And thankfully there is nothing as heinous as Henry Cavill’s CGI chin to distract you this time around.

But…and it’s a big but…’Zack Snyder’s Justice League’ (2021) and ‘Justice League’ (2017) are still fundamentally the same film, with the same problem as before. And it is the same problem which plagued ‘Batman v Superman’ and ‘Man of Steel’ too, in that it trades on these epic mythologies and huge character moments that just haven’t been earned. At every step there’s a feeling that I need to have seen films that haven’t yet been made, or read a lifetime’s worth of comics for any of it to resonate.

Just to be clear, I have seen every film in the DCEU, but I still have absolutely no emotional connection to this iteration of these iconic characters. And I put that down to this: at every beat from ‘Man of Steel’ onwards, Snyder has chosen “what looks cool” over “what’s right for the film”. Look, we all know he’s a visualist. His filmmaking trademark, whether you dig it or not, is his hyper-real music video-meets-graphic novel aesthetic style. It is not however, his storytelling.

But what the film lacks in storytelling finesse and emotional pathos, it more than makes up for in its bombastic assault on your senses. Given an extra £70m to play with, on top of the reported £300m which was poured into the theatrical cut, Snyder throws everything in his locker at the screen and ultimately produces the world’s biggest budget arthouse flick. Some of it works. Some of it doesn’t. There’s really no need to be any more specific than that.

Again, and I want to be absolutely 100% emphatically clear on this: it is better—in every conceivable way that we judge and critique cinema—than what came before. However, it is also a bloated, self-indulgent vanity project, which has an action sequence involving slow-motion flying hotdogs and an extreme close-up of a sesame seed falling off a bun! What I’m trying to say here is ‘Zack Snyder’s Justice League’ is a film which has transcended critical appraisal. It’s ridiculous, brilliant, terrible, spectacular, and stupid, and I’m glad it exists. But let’s never do this again.

The blu-ray edition is split across two discs, with only one special feature included. ‘Road to Justice League’ is a 25-minute behind the scenes documentary, with Zack Snyder reflecting on his career, his trilogy of DC superhero movies, and this film specifically. It’s a really nice companion piece to the film, though you can’t help but think there’s a warts and all version just waiting to be told. This very much skirts the existence of the 2017 film in a “Joss who?” kind of way. Which in fairness is probably for the best.