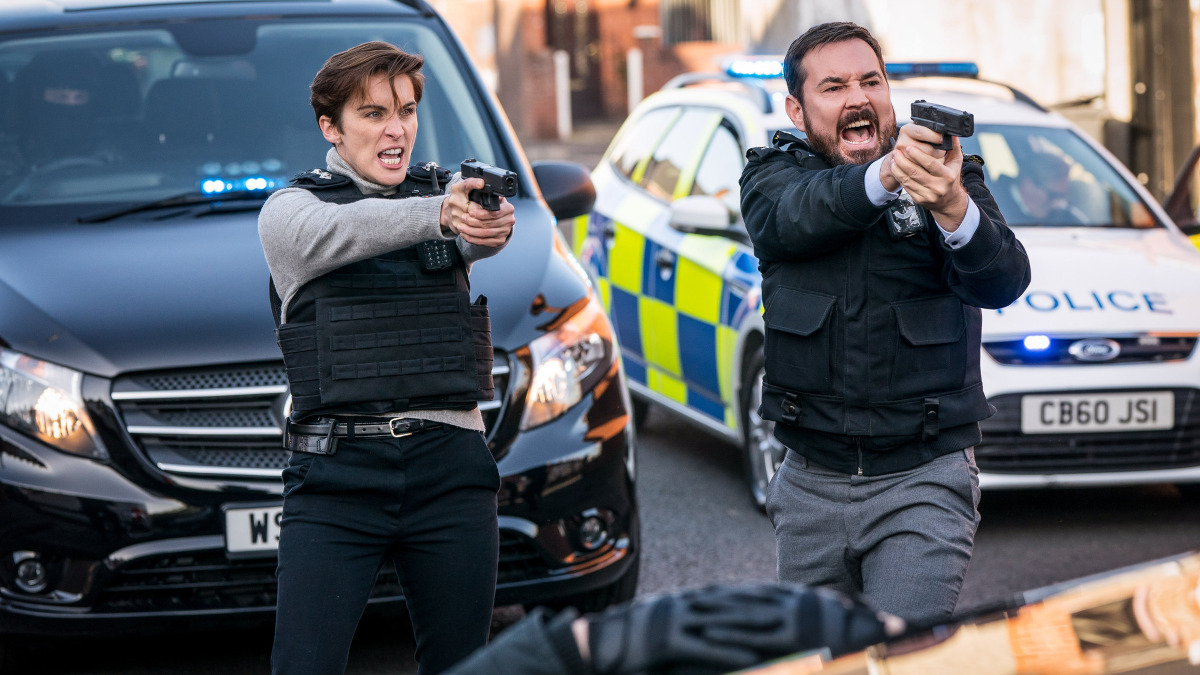 Series 6 of Line of Duty has come to a close. The episode promised answers and did a good job of tying up all the loose ends. It was a fairly satisfying conclusion but I suspect it will have left many fans a bit disappointed and wanting more.

The season 6 finale opened up with Arnott (Martin Compston) reviewing the footage of Carmichael (Anna Maxwell Martin) interviewing Hastings (Adrian Dunbar). He was watching the part where Hastings was questioned about his visit to Lee Banks to see if it played out the way Banks said. The footage showed Hastings deny giving up John Corbett.

Arnott met with Fleming (Vicky McClure) to discuss his findings and revealed that Hastings was being forced into retirement. Arnott was wondering if they should “let sleeping dogs lie” but Fleming wasn’t so sure.

Unable to delay any longer, Arnott finally went to Occupational Health over his drugs test. He was quizzed on why it had taken so long and he blamed it on work. His test had revealed metabolites in his urine which indicated he had been taking high doses of painkillers. Arnott was also asked about many of the traumatic events he had witness during his time on the force. He refused to take time off and was told he’d need some medical investigations and would likely lose his firearms license. Hastings would also have to be informed and Arnott took the opportunity to tell him first. The gaffer was glad he was getting help and offered to help as well if he could.

The search of the concrete floor revealed a hidden fortified strongbox. Lomax (Perry Fitzpatrick) briefed Fleming and Arnott on the findings of forensics and it contained a treasure trove of evidence. This included a workshopped pistol that was used the kill Gail Vella (Andi Osho) and gloves that contained DNA of both Vella and Carl Banks. A series of knives were also found that were used to kill Maneet Bindra, John Corbett and Jackie Laverty. They deduced that the items had been kept by the OCG (Organised Crime Group) as leverage.

Bishop (Shalom Brune-Franklin) updated Hastings, Arnott and Fleming that the bodies found in Spain had been formally identified as Marcus Thurwell (James Nesbitt) and his wife. Internet routers had been recovered that had been redirecting communications data back to the UK. Their meeting was interrupted when a message was intercepted stating that Davidson was high risk and that assets should be contacted at Brentiss Prison. The message once again contained the incorrect spelling “definately”.

Hastings sprung into action and tasked Bishop with looking through their cases files for the incorrect spelling. He mobilised a team to ensure Davidson was safe. However, she was already in the process of being moved. The bent prison guards said a production order had been made by Hillside. Bishop found out that signatures for Lomax and Fleming had been forged.

The prison transport was intercepted at an underpass where the driver was switched for Arnott and Fleming was placed in the back with Davidson. The plan worked and when OCG’s Balaclava men tried to ambush the van, armed police swooped and arrested them along with the bent prison officers.

Fleming and Arnott updated Davidson and explained that she was now safe from the OCG. They had the proof they needed to show she wasn’t bent and had been acting under coercion. If she agreed to talk they could get her into witness protection. Davidson revealed that Tommy Hunter had made her fear and obey a police officer.

Davidson’s confession led them back to Patrick Fairbank (George Costigan). They thought they had their man but could find no evidence linking him with Davidson.

Bishop updated the team on new findings from Cybercrime. The search for the incorrect spelling and an analysis of IP addresses pointed at a different suspect which took the team by surprise. Hastings was ready to spring into action again but was confronted by Fleming and Arnott.

They were concerned that the case was going to be incredibly high profile. They couldn’t have anything jeopardise their breakthrough so had to ask an emotional Hastings about his links to Steph Corbett. He tried to play it down but eventually came clean about his guilt over the murder of John Corbett and the money he gave to Steph.

Following the new evidence, Hastings ordered the arrest of the suspect. We were kept guessing until they were in the AC-12 interview room. It was Ian Buckells! (Nigel Boyle). As the team put the mountain of evidence to him, he played the “No comment” game. However, the team tricked him into showing off and he began shooting his mouth off, thinking he had made mugs out of AC-12.

It turned out that he wasn’t the mastermind ‘H’ that Hastings had been searching for. Instead he was just the last man standing of a line of corrupt, greedy officers. He’d done very well for himself just passing information on for the OCG’s and doing them favours. Buckells wanted immunity and witness protection but Arnott realised that Buckells must have been involved in ordering the murder of Vella. He fell into their trap and found himself in the impossible situation of not qualifying for witness protection or immunity.

Arnott and Fleming spoke to Carmichael. Fleming wanted to open a cold case against Darren Hunter, which Carmichael sarcastically wished her good luck. Arnott wanted a parallel inquiry into officers who worked under Thurwell but Carmichael said that historic corruption cases weren’t a priority.

Hastings came in to see Carmichael and announced that he was appealing against his forced retirement. Carmichael put up a video feed of Chief Constable Osborne (Owen Teale) giving a statement. He praised the Vella breakthrough but refused to admit there was widespread corruption.

Hastings ranted at Carmichael, upset that his teams work wasn’t to be publically recognised by Osborne. He spoke of how those in charge ignoring the corruption allowed officers like Buckells to do what they do. After going to leave, Hastings went back to Carmichael. He decided to come clean about his involvement in the leak that may have gotten John Corbett killed. She didn’t know what to do with the information and Hastings said it was up to her. He told her to care about truth, accountability and to carry the fire. His speech really seemed to make an impact on Carmichael and make her think.

The series ended as Hastings, Fleming and Arnott took the lift down to leave the building. Will this be the last we see of AC-12 and these characters? We’ll have to wait and see if there’s going to be a Line of Duty series 7 to find out.

A final wrap up tied up a few loose ends. Charges against Terry Boyle (Tommy Jessop) were dropped and he was rehoused by Social Services. Farida Jatri (Anneika Rose) was reinstated to active service. Darren Hunter was under investigation for the murder of Lawrence Christopher. Davidson went into witness protection and appears to be happy. Buckells was confined to the Vulnerable Prisoners Unit at a maximum security prison.

Anti-corruption units have been restructured and the Chief Constable has promoted close colleagues to senior positions. Central Police have submitted an application for public-interest immunity in legal proceedings against Buckells. If successful this will prevent evidence related to institutionalised corruption being heard in court. The changes have left AC-12 with greatly weakened powers to curb wrongdoing in public office.