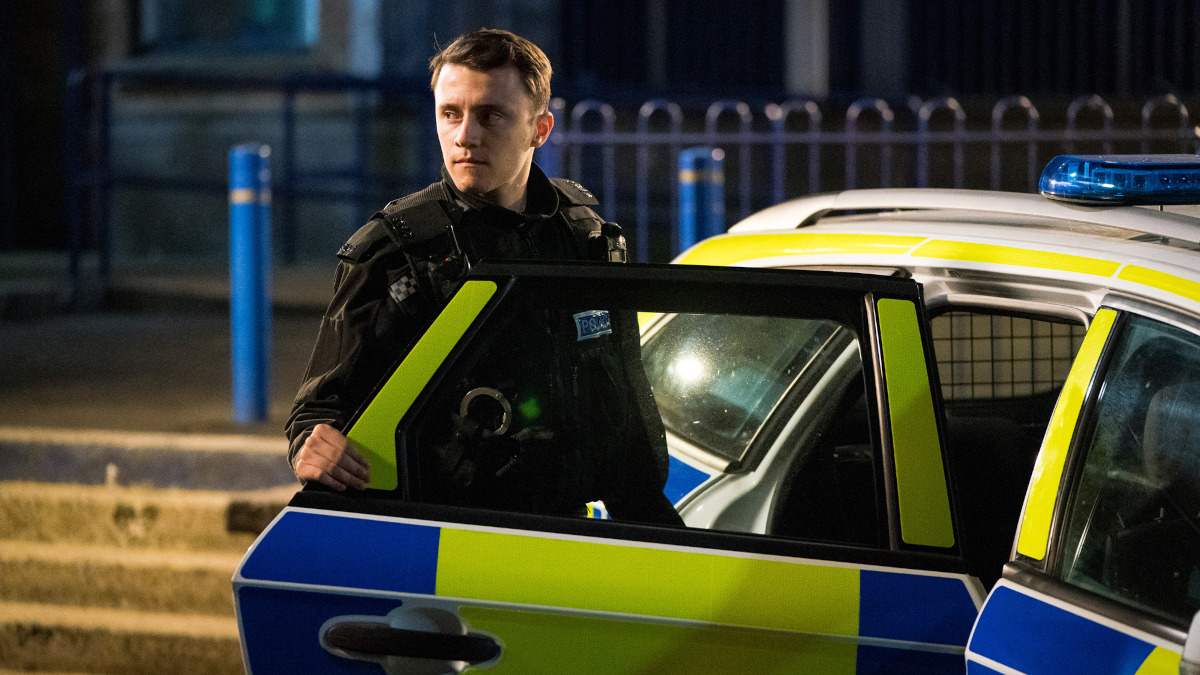 In the third episode of Line of Duty series 6, Operation Lighthouse found a new witness while AC-12 continued their search for bent coppers.

The episode opened up at the Hill, where DS Chris Lomax (Perry Fitzpatrick) received a call that one of their officers had found a woman, Deborah Devereux (Kerri McLean), who claimed to have witnessed an argument in a pub involving, the now dead CHIS, Alastair Oldroyd. They brought her in to get a statement and showed her some photographs. She confirmed Oldroyd was the man she saw arguing but denied seeing Carl Banks. Instead she identified the second man as Terry Boyle (Tommy Jessop).

The police needed to question Boyle again and PC Ryan Pilkington (Gregory Piper) was one of the officers that brought him in. Pilkington was seen telling Boyle that he was his best mate and that everything would be fine as long as he kept him mouth shut.

Boyle was questioned by DCI Jo Davidson (Kelly Macdonald) and DI Kate Fleming (Vicky McClure). He said he didn’t know Oldroyd and that it was ‘the other man’ who did it. When they tried to get more information, Boyle became very stressed. Fleming wanted to push on but Davidson terminated the interview.

PC Lisa Patel (Tara Divina) and Pilkington were assigned to take Boyle home. Pilkington asked Patel if she knew the new route but she wasn’t aware. He said he’d get it and began to direct her, saying it was for Boyle’s security. Unknown to them, Fleming was suspicious and tailing them. When they deviated from the route she checked in with control to make sure they were supposed to be taking Boyle home.

Pilkington asked if it was ok to open his window to get some air and Patel agreed. He then reached from behind Patel and steered their car into a reservoir. Pilkington easily escaped from the open window and Patel managed to also swim free. When she emerged, Pilkington went back to her but instead of helping, held her under the water until she drowned.

From the road, Fleming saw they were in the water and radioed for help. Suddenly Boyle also surfaced and Pilkington moved to drown him as well. However, Fleming arrived on scene so Pilkington had no choice but to pull Boyle out to safety. He then returned to the freezing water to make it look like he was trying to save Patel. After the recovery team arrived, they found Patel’s body and Fleming noticed that Pilkington’s rear window was open.

Following the incident, Fleming decided to go straight to AC-12 to report her concerns that someone had tried to kill Boyle. Superintendent Ted Hastings (Adrian Dubar) thanked her for her co-operation and asked DI Steve Arnott (Martin Compston) to arrange surveillance on Boyle’s accommodation to keep him safe.

Arnott and Fleming worked together and she raised her concerns about Pilkington. Arnott seemed to recognise the name and ran a search on their database. He realised it was the young boy that was working with the OCG (Organised Crime Gang) back in series 1. Arnott remembered that Pilkington nearly cut his fingers off. They surmised that his criminal record must have been missed or ignored which had allowed him to get into the force.

Due to the earlier arrest of PC Farida Jatri (Anneika Rose), Hastings was called to a meeting with DCC Andrea Wise (Elizabeth Rider) and PCC Rohan Sindwhani (Ace Bhatti). Hastings was given a dressing down but he stressed his motivations were following the law, to the letter. Wise told him it was time he stopped pursuing his investigation into H.

Fleming interviewed Pilkington about the reservoir incident. He said he had no idea why Patel took a different route and that his initial statement about what may have caused the crash must have been incorrect. He did confirm that he opened the window for air which helped him escape. He suggested injuries sustained by Patel must have been caused by the crash.

Meanwhile, DC Chloe Bishop (Shalom Brune-Franklin) was alerted to some good news. Boyle’s missing freezer had turned up dumped at a scrapyard. Sadly the CCTV wasn’t working and none of the staff owned up to working the night it was dumped. Arnott suggested that Boyle was being used by an OCG. A drop of blood found in the freezer matched that of Jackie Laverty who was killed in series 1.

Before her AC-12 interview, Jatri had her wrist broken by prison guard Alison Merchant (Maria Connolly). She’s the same guard who poured boiling water over the hands of DCI Lindsay Denton (Keeley Hawes) back in series 2. Merchant must obviously be working with an OCG and her actions were enough to prevent Jatri from talking with AC-12.

Back at the Hill, DSU Ian Buckells (Nigel Boyle) announced he was recommending Pilkington for a commendation for his actions in saving Boyle. After a chat with Fleming, Davidson arrested Buckells on suspicion of Perverting the Course of Justice and took him to AC-12 to be interviewed. They had also found the missing Vella files in the boot of his car.

Elsewhere in the episode, Steph Corbett (Amy De Bhrún) called Hastings to let him know that Arnott had popped in. She also told him about Arnott’s painkiller problem which led to Hastings calling in drugs tests. He made excuses for Arnott but it was clearly a warning to sort himself out. He tried to stop taking them but later relapsed and was asked to give a sample in a second wave of tests.

Arnott decided to pay another visit to Steph and was initially furious that she had gone to Hastings about him. After looking into her financial records, Arnott went back and ended up staying the night. The next morning, after Steph left the house, Arnott had a poke around and found the £50,000 that Hastings gave her last series.

At the end of the episode, Davidson logged onto her laptop and started a chat with an unknown person, presumably part of an OCG. She communicated that everything was under control.