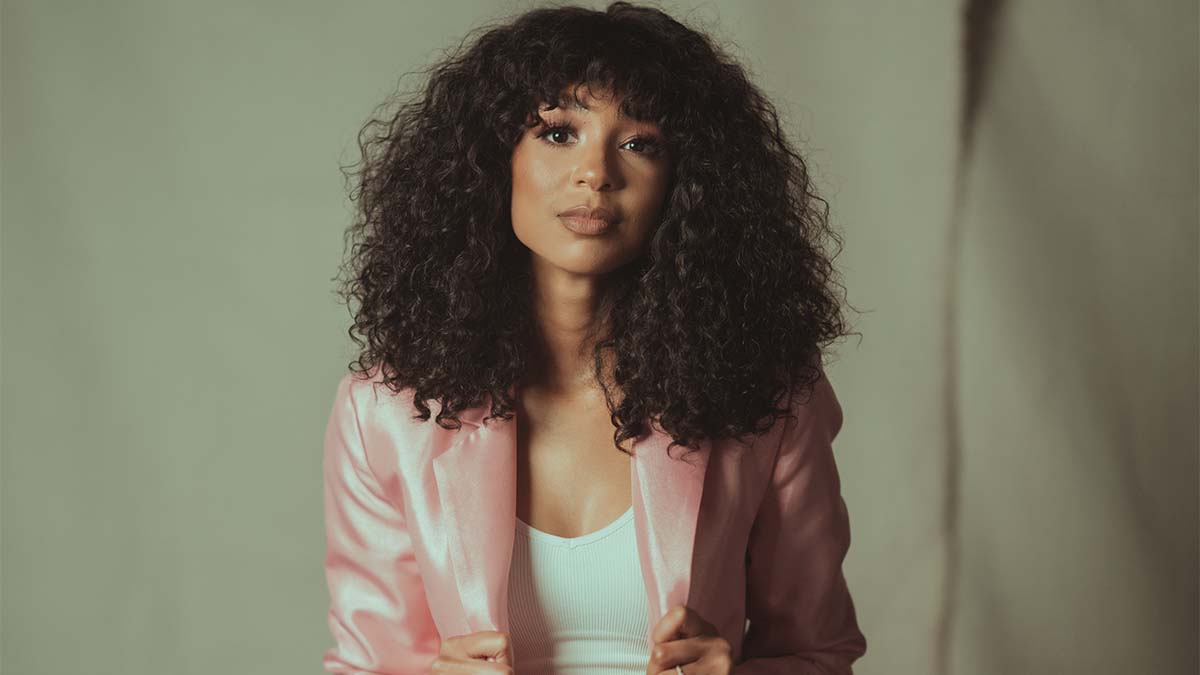 Rising Country singer-songwriter Tiera was part of CMT’s Next Women of Country class in 2020.

For the past 12 months, Tiera has been releasing plenty of new music and earlier this year she released her fantastic 5-track self-titled EP. 2020 also saw her launch ‘The Tiera Show’ on Apple Music, where she shines a spotlight on upcoming artists.

I caught up with Tiera to talk about the EP, discuss working with fellow genre-buster Breland, and to find out what her plans for 2021 are…

You’ve said that this EP is a reintroduction and that it’s the first collection where you’ve truly loved every song. What is it about this release that makes you feel that way?

I think the songs that are released before, I loved those songs, but it was before I really truly knew what my sound was. I was just going along the lines of what I was hearing on the radio and what I was hearing everybody else do. It was more in that pop country vein, and I still do songs like that, but I think the R&B Country lane is definitely more true to me. I grew up listening to R&B around the house because that’s what my parents listened to all the time, and I have always loved Country. My goal with all of my music that I release is to make people feel good and I think every single song on this project does that. I’m really proud of every single one.

I can really hear that hybrid of R&B and Country. I grew up as a child of the 90s so I can hear those influences in your music. The riffs you do with your voice are just amazing…

Thanks. It’s so fun to not have any barrier barriers when we’re writing songs and not worrying about it being too R&B or too Country, and just really writing music that is true to me and that feels good that people can relate to you. I always go back to (the idea that) nobody listens to one genre of music. Everybody listens to different kinds of things and so it’s really fun to blend those together among music.

I agree with you but as a society we’re obsessed with labelling everything and shoving it into a genre. That’s not how it should be and modern Country is such a melting pot of styles and influences…

Yeah, it’s just fun to listen to all of these Country artists and they all sound different because some of them have rock influences or pop influences. I definitely think that we’re getting out of trying to put people in one specific box. The business is learning more that fans are totally fine with it not fitting into one box.

‘Found It In You’ is my favourite track on the EP and I love the difference between the EP version and the acoustic piano version. Why did you decide to put out an acoustic version?

I had actually done a performance in this huge room and the acoustics were so bomb, I felt like I was in the shower (laughs). I started playing ‘Found It In You’ and I started to play it like the original version, the more upbeat, fun situation, but when I started, I just felt like I needed to slow it down a bit, very much so like how the acoustic version is. I think that’s the one song on the EP that can live in that fun, upbeat world but can also live in the more broken down world and make you feel something completely different.

The EP contains a collaboration with Breland, who is another artist that’s breaking down genre boundaries. What was it like to record ‘Miles’ with him?

It was a lot of fun. I think one of the reasons that I really wanted him on the song is because he is so genre fluid. He’s not afraid to live in that hip-hop world, R&B and pop. It was just so much fun. He wrote his own bridge and sent it over and was like, ‘hey, what do y’all think about this?’ and I was like, ‘freakin’ love it’. (laughs) He’s just so talented in all facets so it was really fun getting to work with him.

Were you not tempted to go back saying, ‘actually I have a few notes…’ and joke with him a little?

Part of me wanted to do it as a joke (laughs) and he totally would have laughed at it. I was shook because he sent it back a couple days after I sent him the song. I couldn’t have written it better.

Last year you were part of the CMT Next Women of Country Class. What was that experience like for you and what’s that done for your career?

Man, that was so crazy. I was not expecting that especially at the point that I was in my career. I had gone to a bunch of those inductions whenever I first moved here. I saw a bunch of the classes be inducted and it was always something that was on a goal list of mine. When Leslie (Fram) called me up and asked if I wanted to be a part of the class, it was just crazy and it was also very motivating. I just felt like I was doing something, right. CMT is just such a great organization and they’ve helped me so much in my career. I’m really just so honored to be in that class, and also be with that group of girls because they’re all so talented, and they’re all doing such amazing things.

You had a really busy 2020 because on top of releasing music and being part of that CMT class, you also launched your own Apple Music show. How did that come about?

We started the Apple Music show a little bit into quarantine. I never thought I would be a radio show host. That never was on a bucket list of mine (laughs) but it’s been a lot of fun. My whole thing with my show, it’s a daily show ‘The Tiera Show’, is I love to put a spotlight on up-and-coming artists because I am one myself. I know sometimes it’s hard when you don’t have a record label pushing for opportunities to get your music out there. It’s really fun for me to be able to put them on a pedestal and share their music. We just launched another show today called Soundcheck Radio and it’s based on the Soundcheck Playlist on Apple Music. There’s a lot of genre breaking songs on that playlist, which is very much what my music is. I’m really excited to get to share those songs too.

Who has been your favourite guest on your show so far?

There’s so many. We do interviews every Tuesday on the show and one of my favourite ones was Brittney Spencer. She was one of the first people that I interviewed. I heard her song that she released and I was blown away by her voice and the song. It was a different perspective of anything that I’ve ever heard before and she is such a sweet human. It was such a genuine conversation and I am such a fan of her. I think that definitely was one of my favorite interviews for sure.

What is the rest of your 2021 looking like? Might there be some international touring on the books?

I’ve got more music coming in just a couple months. I’ve written so much stuff that I just am in love with. I’m excited to get those songs out in the world. Hopefully I’ll get back to touring. I just like started performing full band shows right before COVID hit. I’m excited to jump back into that and hopefully travel to some other places and meet all of these people that I know just online. I cannot wait to get back out there.

We really need to get you to the UK. I feel like you would easily find an audience here…

Yeah, I’m pumped. I’ve never been out of the country so I think that would be so much fun. We’re gonna get into those tour conversations real soon and we will definitely reach out because I want the UK to be one of my first stops.

Me too! I love those upbeat jammers and I think that would be so fun to perform live and get the crowd pumped up. You’re so right, there are definitely some acoustic songs, too. I think that’s the fun thing about ‘Found It In You’ is I can switch between the two when it comes to which version I want to play live. I’m excited to get this EP out there because I think there’s a lot of fun songs on there.

Tiera’s self-titled EP is out now to stream and download. Watch ‘Not Your Girl’ below:

Advertisement. Scroll to continue reading.
In this article:Featured, Tiera