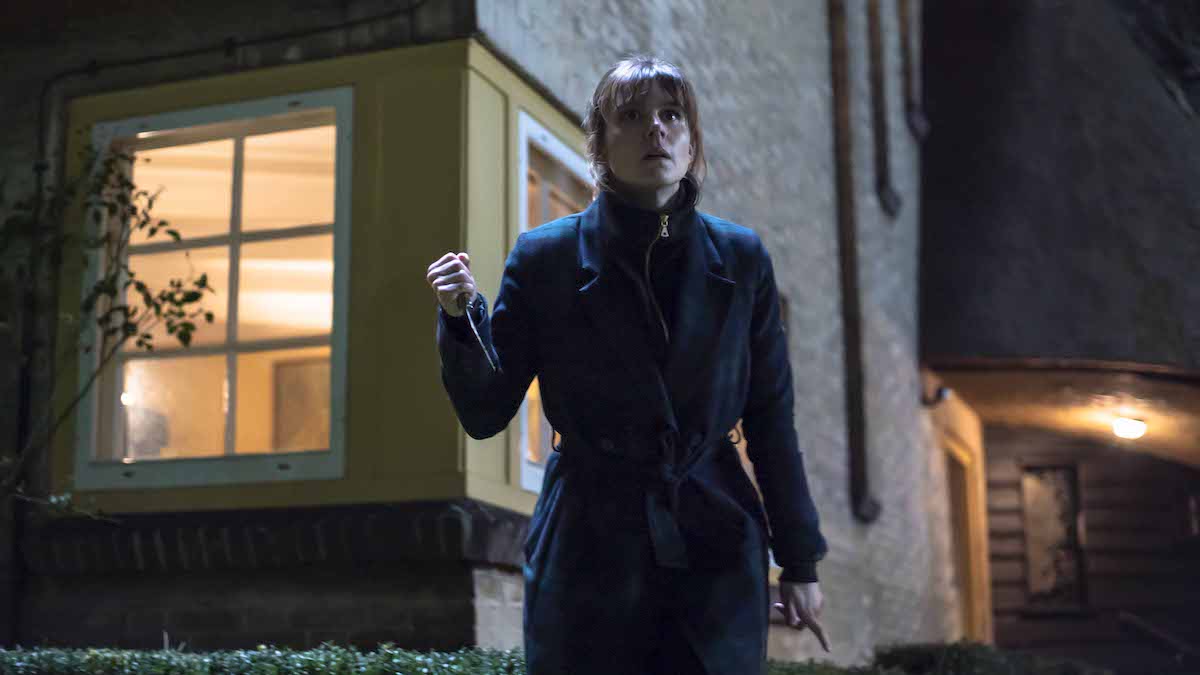 The internet is a horrible place. A largely unregulated frontier, where people protected by the distance and anonymity social media and comment sections afford them, express themselves in ways they would never dare to do in real life. The chances are if you have ever shared an opinion on the internet, some random will have replied to call you a twat. It’s a professional hazard for anyone who writes reviews.

But in a free and democratic society, so long as you don’t break the law, people are free to say what they want. Director Ivo van Aart uses this as the starting point for his darkly comic revenge fantasy The Columnist. Katja Herbers is Femke Boot, a columnist for a national newspaper. Recently, she wrote an article criticizing the Dutch tradition of Zwarte Piet (Black Pete – the companion of St Nicholas in Low Countries folklore, depicted by a white man in blackface) and has now become a target for right-wing trolls on Twitter and Facebook.

Now every single thing she writes, no matter how harmless, is dog-piled by the very worst people on the internet. She espouses decency and tolerance, and says things like “why can’t we just have different opinions and be nice about it?” At the same time, she is trying to write her first novel, but is struggling for inspiration, as she (like most of us) spends most of her time obsessively checking Twitter. When she discovers her seemingly friendly neighbour is one of the hateful Nazi trolls who has been tormenting her, she snaps, and murders him.

I mean, who hasn’t fantasised about tracking down some Twitter moron and pushing them off a roof? Through Femke, we get to experience this. Thrilled at being able to finally silence one of her tormenters, the floodgates open on both her writing and her bloodlust. She starts hunting down all the trolls and killing them in increasingly nasty ways.

I had fun with this film, but it’s a slight piece of work, and not nearly as incendiary and thought-provoking as it perhaps intended to be. The intention here was clearly to say something pointed and satirical about the way we interact with social media, the fluid boundaries of freedom of speech, and who decides how to police what’s acceptable. But the script doesn’t quite have the bite needed to get the most out of its premise, and fundamentally, it only has a superficial knowledge of how the internet works.

The Columnist was originally made for television, and unfortunately it shows. The production value is quite flat, and the violence is dialed back to a very tame level. Which is surprising considering the original Dutch title is De Kuthoer, which translates in English to ‘The Cunt Whore’ – an insult Femke is repeatedly called online. One would expect a film with such a provocative title would be, well, a little more provocative.

The film’s strongest element is without a doubt the performance of Katja Herbers. It’s a brilliant, multi-faceted turn, believably portraying the terrifying flip-side of being twitter-famous, constantly afraid that someone will find out where you live, and that the threats against you will become real. Then when she turns the tables, she is delightfully unhinged.

Coming in at just over 80 minutes, it’s a brisk and fun watch, thanks mostly to Herbers terrific performance. But it just never leans far enough into the absurdity or nastiness required for any of it to hit home. I spent most of the time thinking about how Kevin Smith, a filmmaker who truly understands the internet, approached this same concept 20-years ago in Jay and Silent Bob Strike Back, and to much greater effect.