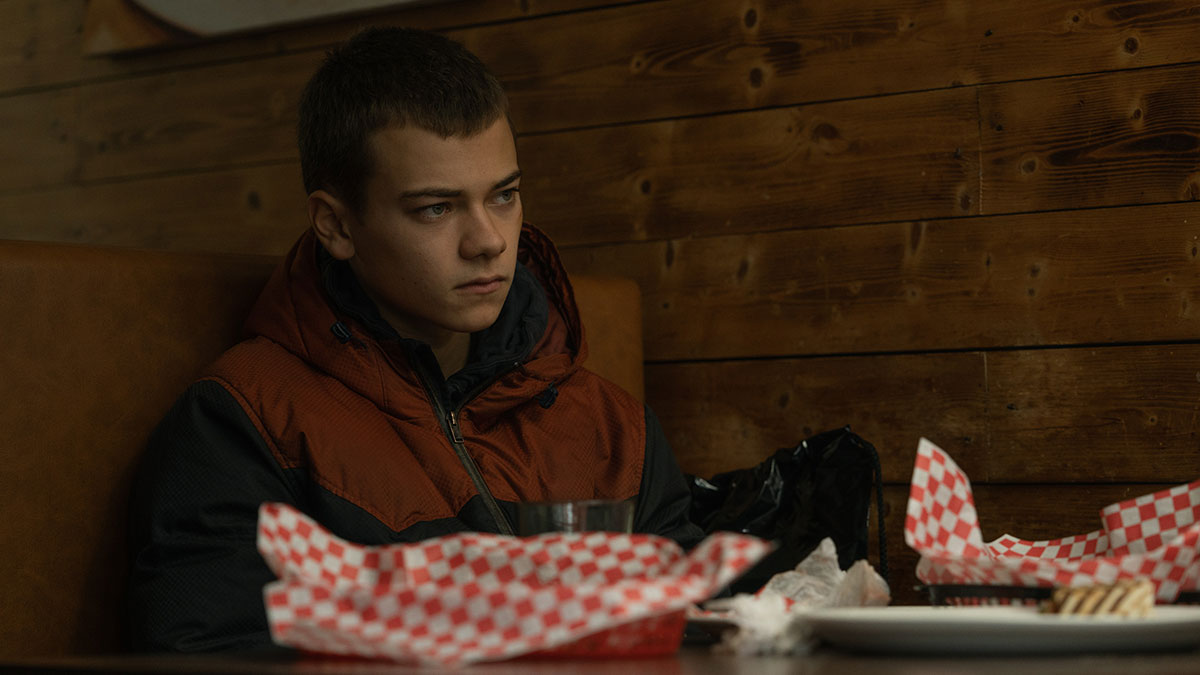 14-year-old Tyler (Conrad Khan) has immense pressure on his shoulders, looking after his younger sister and running the household while his single mother Toni (Ashley Madekwe) struggles to make ends meet as a cleaner. When he gets excluded from school for fighting with another student, Tyler is drawn into the world of drug pusher Simon (Harris Dickinson) who convinces him to transport drugs from the city to coastal towns in exchange for cash.

‘County Lines’ is the feature film debut for writer/director Henry Blake. It’s based on his 2017 short of the same name, which was inspired by his own experiences mentoring children at an East London pupil referral unit. The film is a coming-of-age tale with a hard and sobering edge, highlighting a common practice that isn’t often spoken about. Central character Tyler is more than a stereotypical troubled soul. He’s a boy that’s been forced to parent his younger sister due to his mother’s inability to provide consistently for her family.

His home life makes him a target for the other kids at school where he’s routinely bullied, and the school turns a blind eye preferring to point the finger at Tyler than help resolve the underlying issues that are so blindingly obvious. Blake does a superb job of setting the scene and Tyler’s decision to work for Simon feels realistic. At the point he makes that decision, Simon has already won him over after stepping in during an argument with other school kids in a fish and chip shop. Blake doesn’t flinch from showing us the true reality of Tyler’s situation, highlighting the risks he’s taking and the danger he puts himself into.

Conrad Khan’s central performance as Tyler is nothing short of magnificent. In the hands of a lesser actor Tyler could have simply been a ‘bad lad’ but in Khan’s hands he’s a deeply complex character with many different layers. We see the goodness in him with the way he looks after his sister and we see the pent-up rage as a result of his home life in a scene where he stands up to his mother later in the film. Khan is believable playing both sides of Tyler.

Ashley Madekwe, perhaps best-known for her role in the US drama ‘Revenge’, does away with the glitz of that role and digs into the grit of her character Toni. The character has her head so far buried into the ground that reality really hits when she goes into the school to discuss Tyler’s behaviour, only to lay the blame anywhere but at her own door. Harris Dickinson impresses too, despite having limited screentime. His transformation from nice stranger to menacing bad guy is superbly achieved.

‘County Lines’ is a difficult watch. Blake has crafted a superbly nuanced film with fantastically fleshed-out characters but the harsh reality of Tyler’s situation will be hard for some to watch. Knowing that this is the life that some children are forced to live, makes it even harder. Expect to be challenged, prepare to be impressed by the performances and remember Henry Blake’s name because this film is going to lead to great things for him.