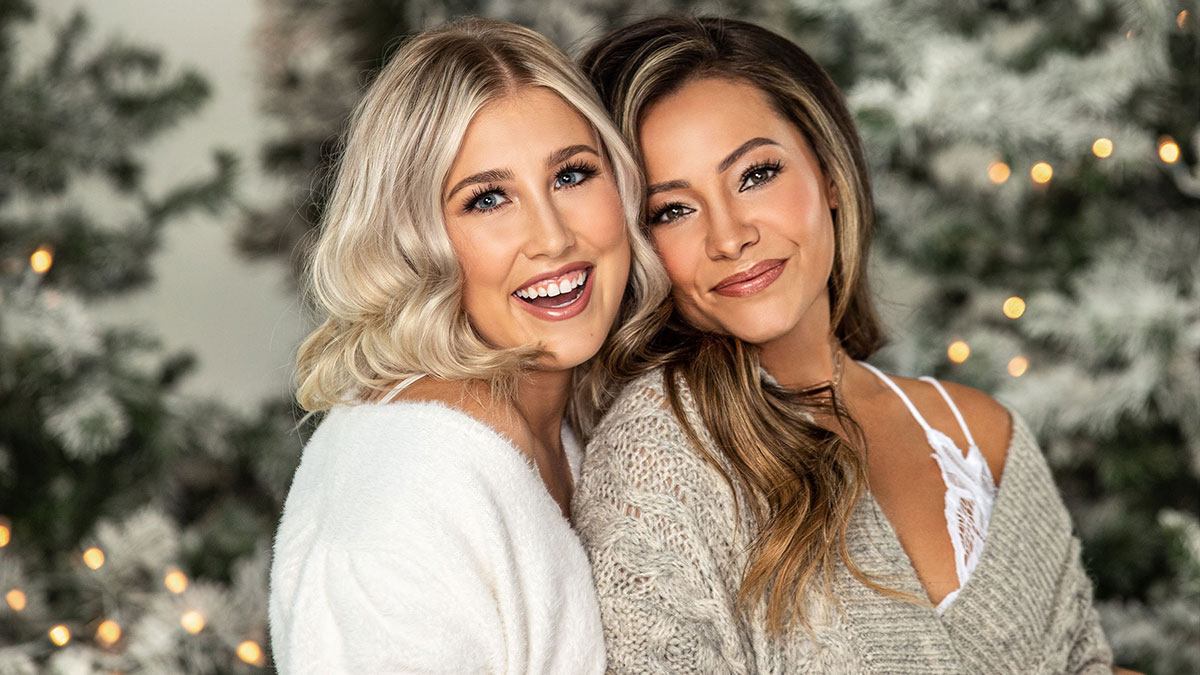 Maddie & Tae returned to the Country charts in a big way in 2020 scoring their second number one with ‘Die From a Broken Heart’.

Their long-awaited second album ‘The Way It Feels’ landed inside the Top 10 on the US Country Albums chart and last month they released their new EP ‘We Need Christmas’, featuring original and classic holiday songs.

I caught up with Maddie & Tae recently to talk about ‘We Need Christmas’, discuss the success they’ve had this year and to find out what Christmas movies are on their ‘must-watch’ lists…

I’ve been loving the ‘We Need Christmas EP’. It’s so feel-good and uplifting, just what we need during these difficult times. The title track really hits on what’s been going on in the world in 2020. Tell me about that track…

Maddie: We had so much fun making it. That one we wrote very naturally, with two of our friends AJ Pruitt and Matthew West, here in Nashville and it was actually during quarantine that we wrote it over Zoom. Matthew actually had the title and we thought, ‘man, we really do need Christmas’ so we leaned into that idea and it was a healing experience getting to write that. Now coming up on the holidays we were like, ‘oh my gosh, this is like the perfect song for this year’.

Your other original track on there is ‘Merry Married Christmas’. How is Christmas for you both with your husbands?

Maddie: This is my second year. Our wedding was November 22nd and we’re going on our trip this year.

Tae: A year flies by. I can’t believe we’re coming up on a year too. This is our first Christmas together.

Maddie: All the traditions are going to be so fun to make. We have probably too many traditions because my husband and I love Christmas, and love tradition.

Tae: I’m kinda like whatever I want to do that year, I’ll do it.

Maddie: Yeah, exactly. Y’all might be a little more loosey goosey. My husband is very Clark Griswold, just think of ‘National Lampoon’s Christmas Vacation’ – that’s my husband in a nutshell.

So lights on the outside of the house and the full works?

Maddie: I came home last night, I was pulling in after work, and my husband’s on the roof. I’m like, ‘what are you doing?’ and he’s just full blown Christmas lights everywhere.

Tae: I’m surprised he wasn’t in a Santa costume!

Maddie: Oh, he just had this big old smile on his face. It just brings him so much joy to do all that (laughs).

I think I need your husband because my husband won’t decorate outside of the house. He’s like, ‘no, we’re just doing indoors’…

Maddie: I hit the lotto because Jonah decorates so beautifully. Sometimes husbands can be questionable with their decor choices but his mom does interior decorating so he was around that. He does such a good job. He’s a great cook, makes great cocktails, which is very important…

What was it like putting this EP together. Did you have to record it in the heat of the summer?

Tae: It was a little different but we typically listen to Christmas music a little bit earlier than most people.

Maddie: Yeah, really, we are crazy!

Tae: We all love the feeling that Christmas music brings. It was exciting because we’ve always wanted to make a Christmas record, we’ve just never had the time to really dive in and give it what we wanted to give it. This year, when we found out everything was canceled we thought what better time and what better way to use our time than to spark some joy in people’s lives. We had a blast (but) going into the studio was different. Like everything this year, we had to wear masks, but just to be able to be creative and cross something off our bucket list was a joy.

I’m amazed you managed to whittle it down to just these tracks. Your harmonies suit Christmas songs so might we get an expanded deluxe edition in the future?

Maddie: That’s exactly what we’re thinking as long as we have the time to do it. We’ve already been talking to our record label because we had so much fun making that and it would just be a cool tradition for us to continue to add to the project. We didn’t really have enough time to make a full year album this year but that’s definitely where our brains are my friend! (laughs)

Despite the pandemic, 2020 has been a really successful year for you with ‘Die From a Broken Heart’ going to number one and your album ‘The Way It Feels’ being universally acclaimed. That must feel very sweet after the delays you experienced due to having to change labels?

Tae: We’re feeling very grateful. I think that’s just the common theme. We’re very tired like everybody, but more than that we’re just thankful that we have stayed healthy and have still had ways to reach out to our fans, whether that be music or social media, or just whatever it may be, we’ve still gotten to do our job. That makes us happy. We’ve gotten to dive in to being wives and our friendships, and our relationships with our family; all of it has thrived during this time and we’re so blessed for that. We know that’s not the case for most people. We’re just trying to remain with a positive perspective but some days it is really hard.

Maddie: Some days, I am just like, grumpy pants so badly and have a horrible attitude, and then I’m like, ‘okay, you know what? Some days are just harder than others and that’s okay’.

I can’t imagine you being grumpy at all Maddie…

Maddie: Oh, just ask my husband. It does happen!

Due to the delay between ‘Start Here’ and ‘The Way It Feels’ were you feeling any nerves about releasing the new album or were you worried about a disconnect with your fans?

Maddie: There was a lot of gratitude towards our fans. We just felt the only reason that we’re still around and still relevant in Country music is because our fans made it that way. Our fans were showing up to the shows, even though we didn’t have new music. They were buying the merch, they were showing up for meet-and-greets… they just went above and beyond for us and they were so kind and understanding. They knew that we weren’t not putting out music because we didn’t want to, it was because it was just totally out of our control. When ‘Die From a Broken Heart’ went to number one, it felt just like a big giant family win.

‘Die From a Broken Heart’ is such a beautiful song. It really does give you all the feels and there are so many songs like that on ‘The Way It Feels’. ‘Water in His Wine Glass’ definitely gets me misty-eyed…

Are you already looking to the future and planning the next record?

Maddie: We’ve already got half of the new album recorded (laughs) We’ve been given the gift of time this year and so we’ve just tried to make some really tasty lemonade out of some funky lemons (laughs) and use it to our advantage. We got to really get creative. I cannot wait for y’all to hear the third album. It’s still Maddie and Tae but we have added some new fun things to it for sure..

I can’t wait to hear it and I’m also looking forward to you being able to get back to the UK. The last time I saw you over here was on the C2C main stage…

Maddie: Trust me, it’s on the top of the priority list. Our booking agents are sick of us asking when do we get to go to the UK?

Maddie: I know, it was forever ago.

Has it been frustrating this year that you haven’t been able to get out and play live?

Tae: We got to do a socially distanced show recently. It was a one-off thing in Texas. Just to be able to step on stage was so overwhelming, and it was just like a big release of adrenaline. We were so excited. We are looking forward to the day that shows are back to normal for sure.

Obviously your creativity hasn’t been affected during the pandemic but what challenges have you faced this year?

Maddie: The album release was tricky because everything had to be done virtually or in a studio socially distanced. We don’t really get to have all of our team members with us all the time. Tae and I, we always say we are the Queen of the curveballs. Ever since everything went south with our previous record label and we had all these obstacles, I think that prepared us for the challenges that came this year. When things are hitting the fan and things are not working out, we do not get scared. We’re like, ‘we’re gonna figure it out. We figured it out this far’. It’s gonna all work out, eventually.

It’s testament to your talent and drive because that wins out in the end, even when things do go south…

Maddie: I’m so grateful that people enjoy the music that we make, because that’s really the only reason why we have a career…

But also the awesome songs that you write…

Maddie: Y’know, I’m not good at much but I’m a good songwriter, you can say that (laughs)

I remember seeing you at C2C and you were pretty entertaining on stage so if music ever stops working out for you, there’s a future there as a comedy duo…

Maddie: Oh my gosh! That would be terrible!

Tae: The thing about that is our comedy is always accidental and it’s always a tad raunchy and inappropriate.

Maddie: It would probably be offensive to some. (laughs)

That’s why it works fo a British audience. We like it a bit raunchier and edgier here…

Maddie: I think we’re British in our souls because we love raunchy humour. I think it’s hilarious.

Are you going to be able to take some time off to enjoy with your families this Christmas?

Maddie: Basically from December 12th, we’re just going to check out for the rest of the year. We’re going to have everything done up to that point. We’re gonna use this time to be with loved ones…

Tae: … and reflect and just collect and heal from a very emotional year.

Maddie: I know. You know, we made it through this far and I’m proud of every single person. We have come this far…

Finally, what Christmas films should I be watching this year?

Maddie: I’ll tell you the five that spark the most joy for me. ‘The Grinch’ with Jim Carrey, ‘The Holiday’, ‘Polar Express’, ‘Four Christmases’ and ‘It’s a Wonderful Life’, if you feel like crying one night then that’s the one.

Tae: ‘Christmas with the Kranks’ is hilarious. ‘Four Christmases’ is my favorite by far and then ‘Just Friends’ with Ryan Reynolds, that’s really fun.

In this article:Featured, Maddie & Tae