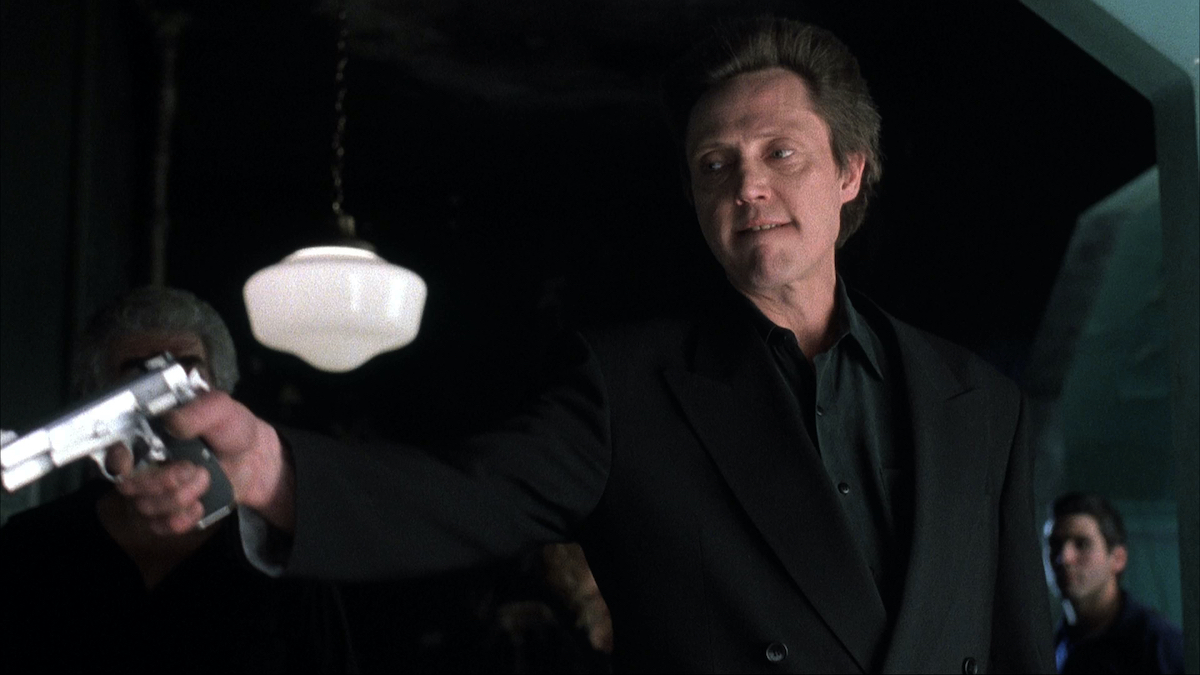 Abel Ferrara’s lowdown and dirty mob thriller has been scrubbed up beautifully in this stunning new 4K restoration from Arrow Films. For those of us of a certain age, who first discovered this film on fuzzy VHS tapes from the local video shop, it is quite the revelation to see Ferrara’s lurid and lyrical vision so stunningly presented.

The film introduces us to Frank White (Christopher Walken) as he is released from prison, having served an unspecified stretch in the big house for being one of New York’s top level drug kingpins. Upon release, he wastes no time in getting back to the top, by having his crew (including the likes of Larry Fishburne and Giancarlo Esposito) waste the opposition in a couple of coolly staged gangland hits.

What makes Frank such an interesting character, is that his violent power grab throughout the city isn’t driven by his desire to rule, but rather share the spoils with those who need it most. Something he accuses his rival mob bosses of failing to do in his absence. Like a psychotic socialist Robin Hood, or an extremely ambitious Omar Little, he wants to wipe out all the other bad guys in order to look after the neighbourhood and fund a hospital.

His violent way of achieving his goals however, bring him into the cross-hairs of the NYPD, specifically the narcotics officers Bishop (Victor Argo), Gilley (David Caruso) and Flanigan (Wesley Snipes). Helpless to stop Frank legally, they resort to extreme measures in order to bring the King of New York down.

The film is an archetypal B-movie shlock-fest, but with everything pitched at an almost operatic level. Whether it be the impressionistic visual style, the score, the hip-hop soundtrack, the gratuitous violence, the ripe dialogue, or the wild and baroque performances. Everything goes up to eleven.

Nobody in the cast holds back. It’s a miracle there was any scenery left on set by the end of the film, after all the chewing by the likes of Caruso, Fishburne, and Snipes. As for Walken, this is perhaps his greatest performance, where he goes ‘full Walken’ and is at his most idiosyncratic and flamboyant.

It’s a highly watchable film, though ragged and disjointed in places. It would be something of a stretch to call it an underrated classic, but its reputation has certainly been enhanced over the years. Having been critically reviled upon release, Ferrara’s most mainstream film has been reappraised numerous times over the intervening three decades, no doubt helped by Walken’s crossover into being a cult icon of cool, following his collaborations with Tarantino and his now famous Fatboy Slim video.

This latest release of King of New York comes with the kind of extensive selection of special features we have come to expect from Arrow. There are two audio commentaries, the first with Abel Ferrara, and the second with Mary Kane (producer), Anthony Redman (editor), Joe Delia (composer) and Randy Sabusawa (casting director).

There is a 30-minute archive interview with Ferrara from 2012, conducted whilst promoting the French blu-ray release. Next up is a feature length profile of Ferrara from 2003, originally produced for French television. The film is an intimate portrait of the director, as he takes the film crew around NYC at night.

A Short Film about the Long Career of Abel Ferrara is a 47-minute documentary from 2004, featuring interviews with Ferrara’s key collaborators over the years. Also from the archives is an interview with the Italian producer Augusto Carminito. Finally, there is an image gallery, and a terrific selection of old school theatrical trailers and TV spots.