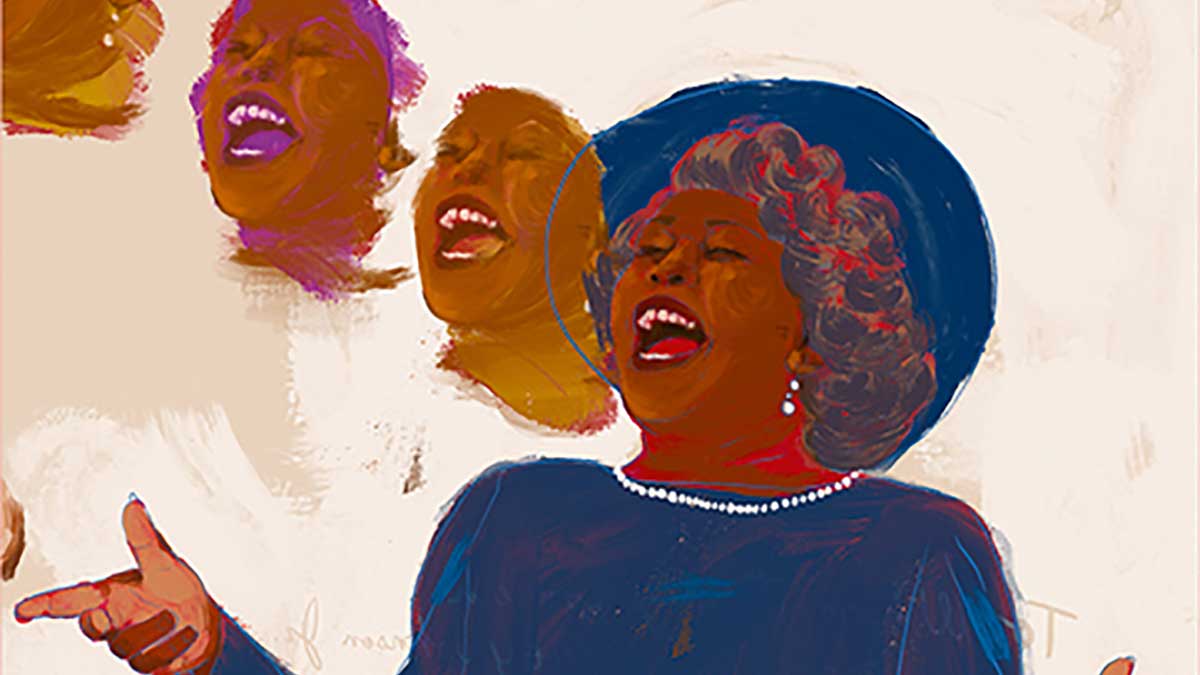 Illustration ©Shabazz Larkin 2020 from The Folio Society edition of Maya Angelou’s I Know Why the Caged Bird Sings.

I Know Why the Caged Bird Sings is often hailed as one of the most important and influential books of the twentieth century. The weight of expectation and significance attached to it can be a distraction – the best thing is to get on and read it. The first volume of Maya Angelou’s autobiographies, first published in 1969, is undoubtedly a literary achievement of considerable merit. Not only is it beautifully written, but it also recounts a period of American history, specifically the early 1930s to early 1950s, and pinpoints it in the American south, where the bulk of the action takes place, with extraordinary clarity and detail.

The current climate of racial tensions in America adds to the poignancy and timelessness of Angelou’s work, and there’s no way of reading it without seeing the events through a prism of twenty first century concerns.

The broad thrust of the narrative follows Marguerite (‘Maya’, we learn, is a nickname) and her older brother Bailey as they are abandoned as children to be brought up by ‘Momma’, their maternal grandmother, in the small town of Stamps in Arkansas. Few writers have the ability to faithfully recreate their childhoods on the page without it sounding sentimental or exaggerated. It’s hard to think of a more successful evocation of that period of innocence than ‘I Know Why the Caged Bird Sings’. That’s not to say that Angelou’s childhood is idyllic – far from it – but the setbacks and confrontations she contends with are relayed through a child’s forgiving eyes.

That early preparation – the hiding of the physically disabled Uncle Willie from the Ku Klux Klan as seen through a child’s uncomprehending eyes, for example – don’t prepare the reader for the later molestation and rape of the narrator at the hands of her mother’s boyfriend. The sense of disgust and horror in the reader, in harrowing moments such as these, is heightened by the literary effect of the writer describing it in the terms of childish innocence. It is an unforgettably troubling moment, and one that casts a long shadow in the book.

Despite an unflinching approach to depicting racism and abuse, there is not a trace of self-pity throughout I Know Why the Caged Bird Sings. Rather, Angelou acquires as she matures into her teenage years a self-belief, partially built through her intelligence and love of literature, and bolstered by the one constant in her life – her brother Bailey. Whilst her parents come and go as figures of influence, and her detached relationship with her mother is recounted with a nuanced psychological accuracy, it’s Bailey who gives the protagonist the most emotional support. It’s all the more moving that, as they grow up, their paths seem to be diverging.

Single moments summarise the power of the book: when her mother warns Marguerite against applying for a job on the San Fransisco streetcars, because they don’t hire Black people, she applies anyway. After a doggedly determined three-week recruitment process, Marguerite becomes the first Black conductor on the streetcars, breaking the cycle, shaping her own destiny. In another memorable passage, Momma confronts a racist dentist who refuses to extract a rotten tooth from Marguerite’s mouth. Playfully, the author describes what she imagines her angry Momma says to the dentist. We later learn the actual exchange between them (which isn’t quite as dramatic!) It’s a neat way of laughing at casual racism and turning an example of bigotry into a humorous passage, without dampening the message.

I Know Why the Caged Bird Sings is full of such outstanding moments that are sure to live on in the reader’s memory long after reaching the end of the final page. It is so skilfully written that there’s a great pleasure to be had simply in absorbing a book of such literary merit. Angelou’s lasting significance though is deeper than that: she has a powerful ability to take a reader – even those who have grown up in completely different eras and cultures – and transport them to her immediate time and surroundings, such that nothing seems alien or incomprehensible. In understanding race and racism in America, I Know Why the Caged Bird Sings still has unfathomable depths, and much to say. That you can’t help but love the narrator ensures that it’s a joy to follow her journey.

The Folio Society’s new edition hardback edition in red slipcase is a fantastic celebration of Angelou’s totemic first volume autobiography. The Folio Society edition of Maya Angelou’s I Know Why the Caged Bird Sings, introduced by Tayari Jones and illustrated by Shabazz Larkin, is available exclusively from www.FolioSociety.com.

In this article:I Know Why the Caged Bird Sings, Maya Angelou, The Folio Society