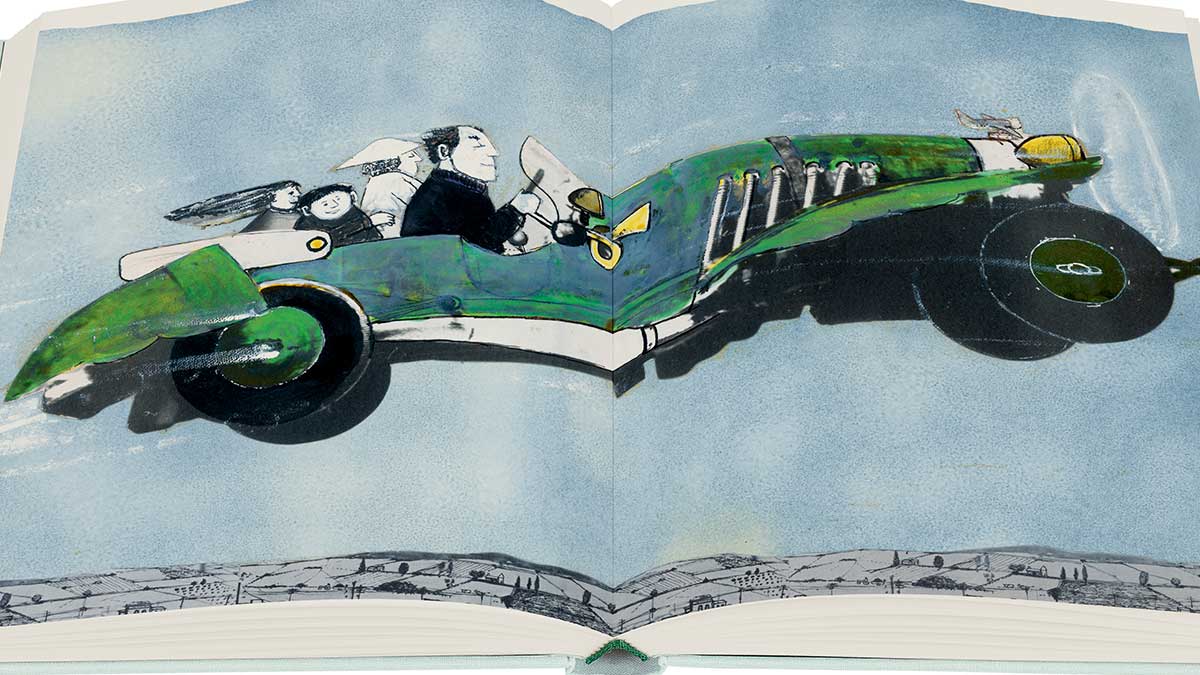 Few authors are read widely and retain their status as a household name over fifty years after their decease. Ian Fleming bucks that trend thanks to his James Bond espionage novels, which in turn spawned a monster of a film franchise that dominates popular culture to this day. Yet his only children’s book – Chitty Chitty Bang Bang – also remains part of the common lexicon. The extraordinary adventures of an eccentric British family and their magical car is part of our shared heritage, lovingly passed down to each new generation of children.

Part of the reason for his enduring appeal is that Fleming was an exceptionally good and economic writer. His Bond novels waste no time at all. Every word is employed in the telling of a great story. So too with Chitty Chitty Bang Bang. The author’s literary style is, necessarily, adapted for a younger readership. Yet how easily the words flow. They can’t help but draw in the reader, or listener; for it’s written in such a personal way as to benefit being read aloud to spellbound youngsters. There’s a playfulness too, and a wittiness in the omniscient narrator occasionally breaking the ‘fourth wall’. At the same time, it’s unmistakably from the Fleming canon: there’s the obsession with loud, fast and impressive cars, for starters. If the lead (human) character Caractacus Pott isn’t the hard-drinking womaniser of Fleming’s best-known works, he’s still a military man. Pott is a former naval Commander (the same rank Fleming ascribed to Bond) who happens to have become a crackpot inventor who can’t resist an adventure. Is this Fleming’s idea of Bond in retirement?

Where Fleming deviates from his earlier works, and his imagination takes off (literally), is in his use of a magical flying car, which is essentially just a plot device to transport a family into a series of extraordinary adventures. Yet the car has a colourful personality of her own, and is as much a member of the Pott family as any pet might be. Presented here are four adventures comprising everything Fleming wrote for these delightful characters – contained within one special collector’s edition from The Folio Society.

If Fleming has the good fortune of retaining a loyal readership posthumously, then perhaps his misfortune is in the wild deviation his novels are subjected to when transferred to the screen. When it came to Bond, some (notably The Spy Who Loved Me) retained only their memorable title. Chitty Chitty Bang Bang doesn’t suffer quite that fate. But, through the fug of childhood, it’s hard to separate the events of the novel from the fantasy of the 1968 musical film, featuring Dick Van Dyke as Caractacus Pott, even for those who, like me, happily digested both during our formative years. Save from the characters’ names, the whistling sweets and a flying car, the rest of the movie is the invention of the screenwriter (one Roald Dahl, himself no stranger to children’s fiction), who adapted it following Ian Fleming’s untimely death in 1964.

The adventures on the page see the Pott family (Commander Pott, his wife Mimsie and their twin children Jeremy and Jemima) take a ride out in the renovated motor car bought from the earnings of successfully selling a boiled sweet recipe. Rather than leaving them stuck in traffic, the car turns into an aircraft, and flies them all the way to Calais, where they discover a large cave full of a gangster’s secret arsenal of weapons. But when they draw attention to themselves, the gangsters pursue the family. When the children are snatched, taken to Paris and forced to take part in a criminal wheeze, it’s left to the family car to help Commander Pott track them down and come to their rescue.

The Folio Society’s lavishly-produced edition brings together all four short adventures in one volume. As they are all connected, a single-volume edition is a sound approach. The best news for readers who grew up with the first editions is that they have used original illustrator John Burningham’s work, reproducing his paintings and sketches often in full-colour, and sometimes across two pages. It is a stunning edition of an essential and timeless children’s classic. The high production quality and hard cover ensures it is a durable copy, and the large font and stunning, cleverly detailed illustrations will enrapture younger readers, guaranteeing that the tradition of these fantastic tales enliven today’s childhoods, and will be passed on to tomorrow’s.

An afterword by Fergus Fleming occupies a fifth of the volume. The author’s nephew provides fascinating and valuable insight into Ian Fleming’s life, focussing on the sad circumstances surrounding the writing of Chitty Chitty Bang Bang. Following a heart attack in 1961, Fleming was forbidden from working at his typewriter. The first draft of Chitty Chitty Bang Bang was defiantly written by hand, during convalescence. It’s hard to imagine that the book is the product of a writer struggling with deteriorating health, so beautifully do the words flow. Nothing seems mechanical or forced. Chitty Chitty Bang Bang has all the life-blood and zest of his earliest works. There is a touching full page black and white photograph of the author holding his newborn son Casper, as well as a faithfully-reproduced letter Fleming sent to an illustrator, looking to hire him to work on the book. There are a few other treasures within these pages that any collector of Ian Fleming’s work will cherish. The Folio Society’s Chitty Chitty Bang Bang is the perfect excuse for childhood nostalgia, especially for those with young readers keen on magical adventures.

The Folio Society edition of Ian Fleming’s Chitty Chitty Bang Bang, including a new afterword by Fergus Fleming and original illustrations by John Burningham, is available exclusively from www.FolioSociety.com.