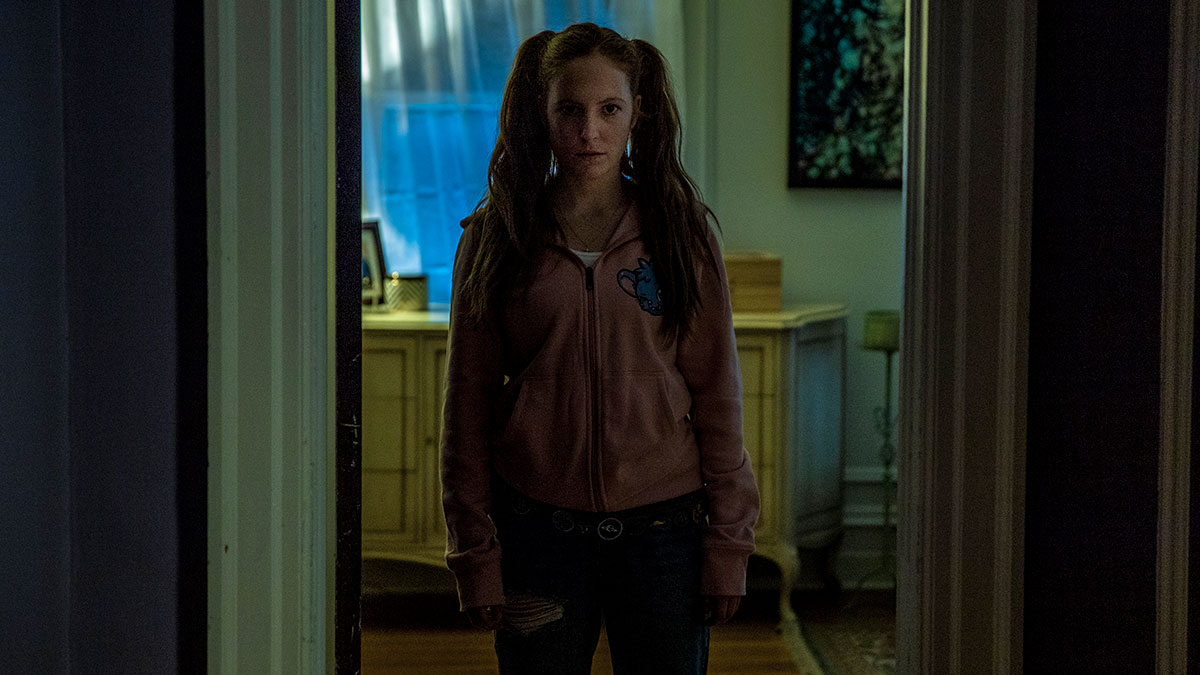 Josie Jane (Riley Scott) skips a big Christmas party with her friends to earn some extra cash babysitting for Sophia (Scarlett Hazen) the daughter of a famous music producer. After a game of hide-and-seek, Josie is surprised when Sophia’s parents arrive home early. Before she gets a chance to leave, the house is invaded by a pack of brutal cultists who are hunting down something they believe to be hidden inside. Josie manages to hide before she’s spotted by the invaders, and she hatches a plan to free the family and save their lives.

‘Babysitter Must Die’ comes from film-maker Kohl Glass and it’s an interesting spin on the babysitter stalked by killers concept that’s been done to death in horror films. The opening 20 minutes are surprisingly brutal as the cult forces its way into the house and takes no mercy on a handful of superfluous characters. It sets the scene nicely for a cat-and-mouse horror that sees Josie trying to outwit the cult and save the family that employs her to babysit.

At first Josie seems like an incredibly unlikely hero. She’s the kind of girl that’s holding on her to her youth and refusing to grow up, preferring to relive her Mustard Scout days than mingle with her friends. Her reaction as she sees the situation unfolding is to hide under a chair in shock but she eventually realises that it’s up her to save the day or she might end up losing her life too. There are some tense scenes as Josie moves around the house trying to evade the cult members but inevitably she has to tackle them head on, and it’s pretty enjoyable stuff.

In order to survive, Josie calls on her Mustard Scout skills to help her. At first it’s quite funny because she’s obviously terrified and out of her depth but once she gets into the swing of things, literally, she becomes unstoppable. While that plays out, viewers will worry about the family who are tied up and there’s a little bit of mystery around what the cult is looking forward and what they intend to do with it (spoiler alert, it’s not pretty!).

Riley Scott commits to Josie admirably. She’s very good bringing the character’s geeky side to life and her transformation is fantastic to watch. Before your very eyes you see a chirpy but socially awkward girl, channel her suppressed anger and aggression into violence. Josie is also the only character that’s really fleshed out with the writers choosing to keep the cult deliberately vague and the supporting characters, very much supporting.

‘Babysitter Must Die’ is a lot of fun and as it’s so short, it breezes by very quickly. I really enjoyed watching Josie’s unexpected adventures and the character is one that could easily come back for a sequel, should the film-makers choose to write more films for her. The film ticks of some well-loved tropes but it handles them differently enough to stand out. I would definitely say it was one of the surprises of the festival.

In this article:Arrow Video FrightFest, Babysitter Must Die, Featured, Frightfest