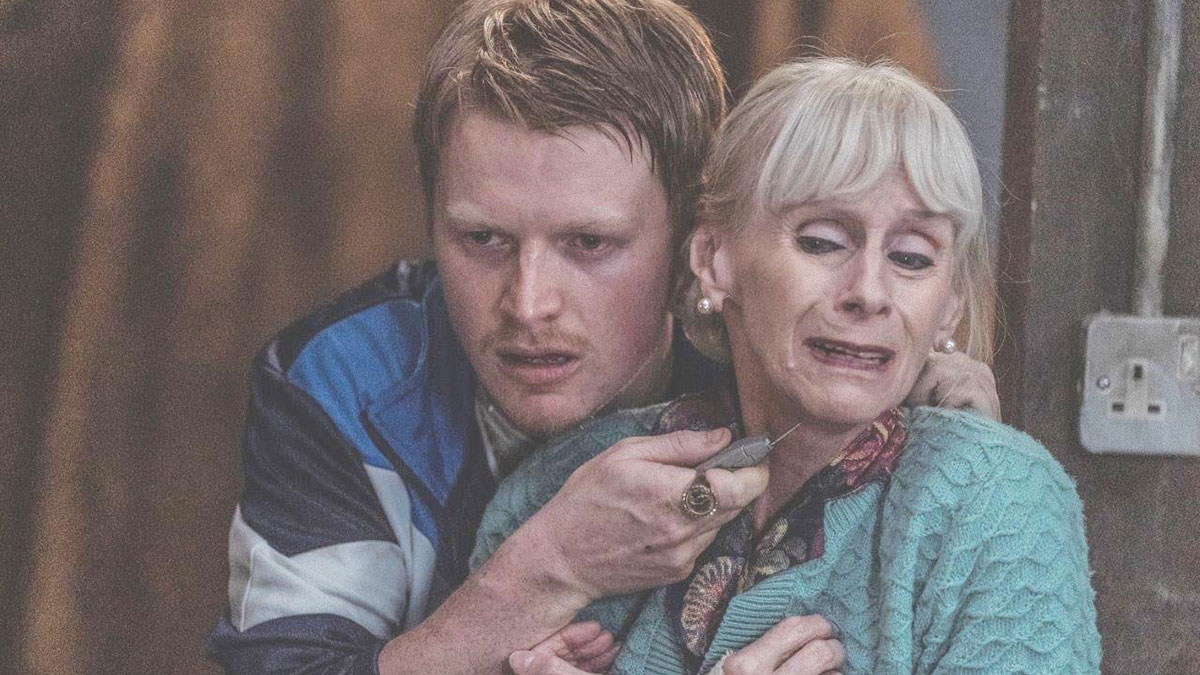 Nathan (Ian Kenny) and his friends Terry (Andrew Ellis) and Gaz (Jake Curran) plot to rob the home of elderly doctor Richard Higgins (Sylvester McCoy) and his wife Ellen (Rita Tushingham) after being tipped off that they have lots of money stored in a safe. Joined reluctantly by Nathan’s girlfriend Mary (Maisie Williams), the group decides to wait for the couple to come home when they fail to crack the safe. Taking Richard and Ellen hostage, the group starts to fray over how they should handle the situation and they soon realise they’ve bitten off more than they can chew.

‘The Owners’ is an inventive and clever home invasion horror from director Julius Berg. Reminiscent of the 2016 film ‘Don’t Breathe’, it pits a group of youngsters who think they have an easy target against two people who shouldn’t really be able to fight back. Nathan is convinced to escalate his plan by Gaz, the wild card of the group who is completely unhinged and desperate to get his hands on the cash for his own gain. Terry and Mary are the two members of the group who are unconvinced by what they’re doing, and once the second thoughts creep in the group becomes splintered.

Without going into spoiler territory and saying too much, ‘The Owners’ does a fantastic pivot at the halfway point that completely changes everything you thought you knew. Dr. Higgins and Ellen may be elderly, the latter losing her marbles, but they’re much more resourceful than any of the would-be thieves expect. That creates some brilliant moments as the crazy cranks up and the power dynamics shift.

The big draw here is likely Maisie Williams, who has become a global star following her role on ‘Game of Thrones’. She’s very good here acting as the moral conscience for the group but also showing what a person will do when they find themselves unexpectedly trapped in a dire situation. The real star though is Sylvester McCoy, best-known for his lead role in ‘Doctor Who’ back in the late 80s. Fans of that series will get a thrill hearing him being referred to as ‘the doctor’ throughout this film and his performance is very impressive. Special mentions should do to Rita Tushingham, who gives an odd and unnerving performance, and Andrew Ellis as the hapless Terry, whose Mum cleans the house he’s attempting to burgle.

‘The Owners’ is a tight and taut 90-minute home invasion horror that’s definitely worthy of your time. There are plenty of surprises along the way and the story keeps you guessing about what will come next. The cast is universally fantastic and the climax provides a satisfying payoff. The biggest question you’ll have once you’ve seen the film is who did you side with? The youngsters of the Higgins’?

‘The Owners’ will be released on DVD and Digital HD on 15th February 2021 by Signature Entertainment.