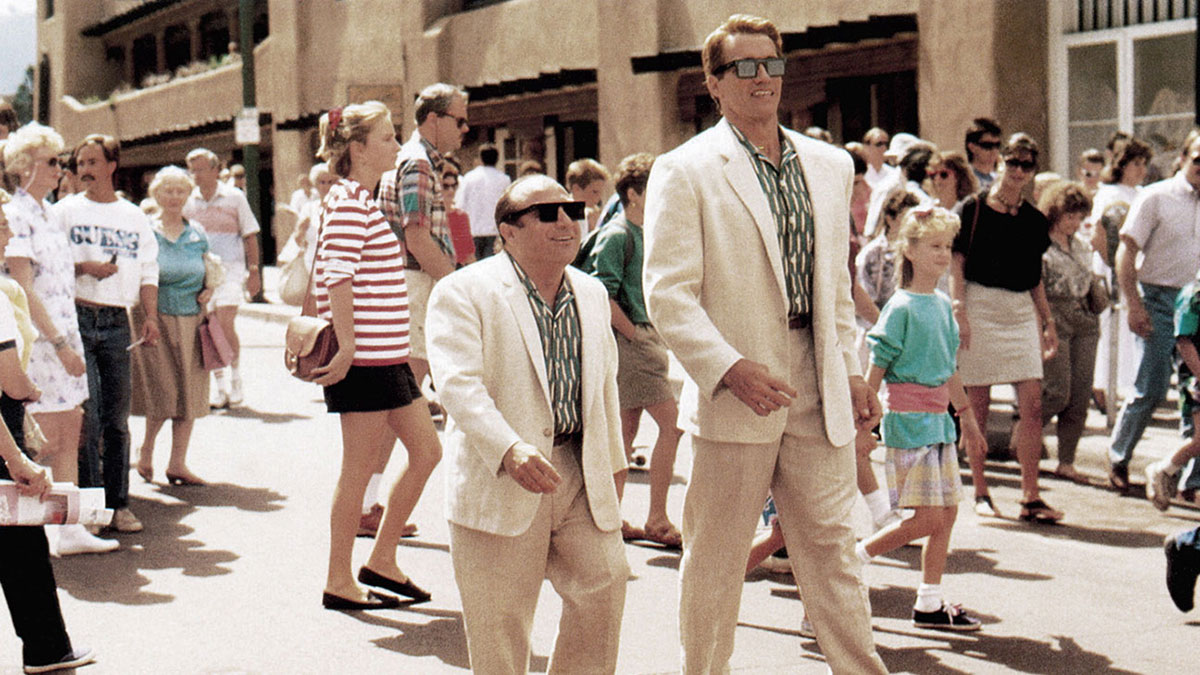 Julius (Arnold Schwarzenegger) and Vincent Benedict (Danny DeVito) were part of a secret experiment to create the perfect child by combining the DNA of six men. Instead of producing one child, the doctors created twins. Julius was taken under the wing of Professor Werner (Tony Jay), one of the scientists involved in the experiment, while Vincent was placed in an orphanage. Their birth mother was told one child died and she didn’t know about the existence of the other. On Julius’ 35th birthday Werner tells him about Vincent, and Julius goes on a quest to find his long-lost twin brother.

‘Twins’ was released in 1988 and it was directed by Ivan Reitman. The film was a huge box office success, grossing over $216 million across the world from an $18 million budget. Considered a classic comedy from the 80s, ‘Twins’ has just been re-released on DVD and for the first time in the UK released on Blu-ray by Fabulous Films. At the time the film was made, its lead actors Schwarzenegger and DeVito were at the height of their fame so it’s no surprise that audiences flocked to cinemas to see the film.

The premise of ‘Twins’ is pretty silly but the film doesn’t claim to be anything other than a light-hearted comedy, with a big heart at its core. The likelihood of Julius and Vincent actually being twins is very slim but that makes the story even more entertaining. With Julius’ rippling muscles and tall stature stood next to Vincent’s small and rotund figure, it presents a pretty funny visual.

Julius tracks his brother down to a local jail where Vincent is being held for unpaid parking tickets and driving with an expired licence. The moment the two meet, Julius is confused by his brother’s appearance but quickly takes to him as the brother he never knew he had. Vincent on the other hand, a small time crook, sees an opportunity to use Julius for money and a variety of nefarious deeds. The two brothers are brought together as they try to track down their birth mother, accompanied by love interests Marnie (Kelly Preston) and Linda (Chloe Webb).

Schwarzenegger and DeVito are a match made in heaven. Their opposite builds work to their advantage here and they have a very warm chemistry together on screen. The duo’s work on ‘Twins’ led them to reunite with Reitman in 1994 for ‘Junior’, which didn’t recapture the magic of ‘Twins’ critically or at the box office.

‘Twins’ isn’t an amazing laugh-out-loud comedy but it’s an interesting capsule of the time it was made, that will entertain you. Much of the humour comes from Schwarzenegger and DeVito playing off one another, and even when the plot gets ridiculous, their chemistry is enough to keep you watching. The Blu-ray version does scrub the picture up considerably and if this was a film you remember from your childhood, I’m sure you’ll be keen to revisit it in high definition.