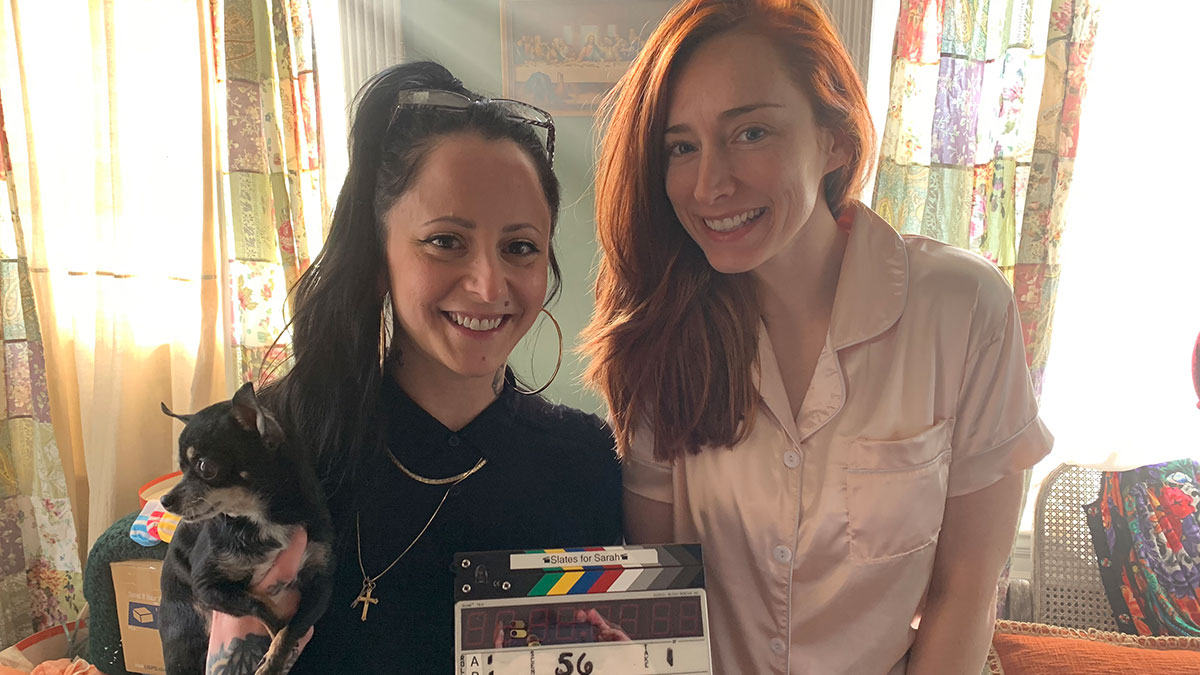 Film-maker and professional hair stylist Jill Gervargizian made a splash with her short ‘The Stylist’ in 2016.

Four years on and the short has now been turned into a feature film, and it’ll be receiving its UK Premiere at Arrow Video FrightFest this week. Mixing slasher sensibilities with a very human story, the film is going to be one of the festival’s surprises.

I spoke with Jill recently to find out more about the making of the film, to discuss lead actress Najarra Townsend, and to talk about the respectful way she filmed her actresses…

Hi Jill. How are you today and how have you been coping during these crazy times?

I’m doing pretty well and that’s largely thanks to ‘The Stylist’ – honestly! It has saved my crew and I during these tough times. It’s given us something to get lost in, something to escape from reality – which is kind of perfect, as that’s truly what the film is about.

Your film ‘The Stylist’ is having its UK premiere at Arrow Video FrightFest this month. What’s the film all about?

It’s about a hairstylist, Claire, who is also a serial killer. She scalps her victims and wears their hair as a means for escape. One of her favorite clients, Olivia, asks her to style her hair for her wedding. Through preparing for the big day, Claire and Olivia become closer. This means a lot more to Claire than Olivia realizes and when Olivia tries to set boundaries with Claire, it’s too late.

You originally shot ‘The Stylist’ as a short. Why did you decide to expand it into a feature and what challenges did that present?

It was always my intention for this to become a feature film. When the idea first came to me (7 years ago) I had only directed one short film and knew I needed more experience before diving into a feature. One of the biggest challenges narratively was trying to figure out how to let the audience learn more about Claire, where she came from, and her motivations, without literally going back to her childhood and telling her entire life story. My co-writers and I wanted to leave space for viewers to insert themselves into the story and to have their own interpretations versus plainly stating why she does what she does.

Where did the original idea for ‘The Stylist’ come from?

I’ve been a professional hairstylist for over 15 years and a horror fan since I was 9 years old. One day it just dawned on me, “How is there not a slasher film about a killer hairstylist?” That’s when I started brainstorming ideas. I ended up leaning away from the traditional slasher set up. Instead I wanted to make an anti-hero character piece, structured more like a psychological thriller, but with kills that could go toe-to-toe with the goriest horror films.

Najarra Townsend plays central character Claire, reprising the role from the short. Why did you originally cast her in the role and what do you think she brought to the character?

Najarra is an incredible talent. I can’t believe she’s not in huge films yet. I’ve said this many times, but this film would simply not work without her. She constantly wows me, everytime I watch it. Claire is a very introverted character and Najarra expresses so much in such subtle ways, without saying a word. She kept the character grounded and relatable while doing these horrible, outlandish things – which is a huge feat. She also taught me the importance of not just creating a backstory for a character, but creating super specific memories that shape the character into who they are today.

Brea Grant is the film’s other lead as Olivia, the woman that becomes the object of Claire’s obsession. Brea is very popular in the horror genre so tell us how you got her involved in the film…

I met Brea about 3 years ago through another film project that we haven’t been able to get made yet. We really hit it off and I knew it would be my goal to work with her as much as possible. I had this intuition that Brea would be the perfect Olivia. Even more importantly, I wanted Claire and Olivia to feel like opposites and when I finally got to see Najara and Brea perform together it was like magic. Their chemistry was perfect. Claire is so introverted and anxious, while Olivia is so free and energetic – her light could fill a room. I think we really lucked out getting to work with the two perfect actors for these roles.

One of the things I loved about your direction is how the women aren’t objectified. In the hands of a male director, there are some moments where the actresses would have been sexualised for thrills but the way you handle them is with a lot of care and respect. Can you tell us a bit about your directing style and how you got the best from this cast?

Thank you. Honestly, this just isn’t a film that calls for that type of shooting. To me, certain films give reason to shoot that way. For instance – Coralie Fargeat’s ‘Revenge’, also a female director, but in the film, the lead character is often objectified. In that film it has purpose, it’s to be confrontational, it’s to get you to think about what this makes you feel and does it make you judge the character differently? I found that incredibly powerful.

Our film is about Claire, it’s her story, from her perspective. She’s also a very sexually repressed character, so it didn’t make sense to shoot her or the objects of her obsession sexually. For me, everything should have reason and intention, every choice a filmmaker makes. I take that very seriously.

I’ve got a script I’m personally working on – that I’m very excited to dive deeper into now that space is freeing up in my brain since The Stylist is finally done!. I’m also attached to direct a horror feature script written by Matt Black and Laurence Vannicelli. Unfortunately nothing I can talk about in detail yet.

‘The Stylist’ has its UK Premiere at Arrow Video FrightFest at 11.45am on Sunday 25th October 2020. For more information and tickets, please visit www.frightfest.co.uk. Watch a clip from ‘The Stylist’ below: