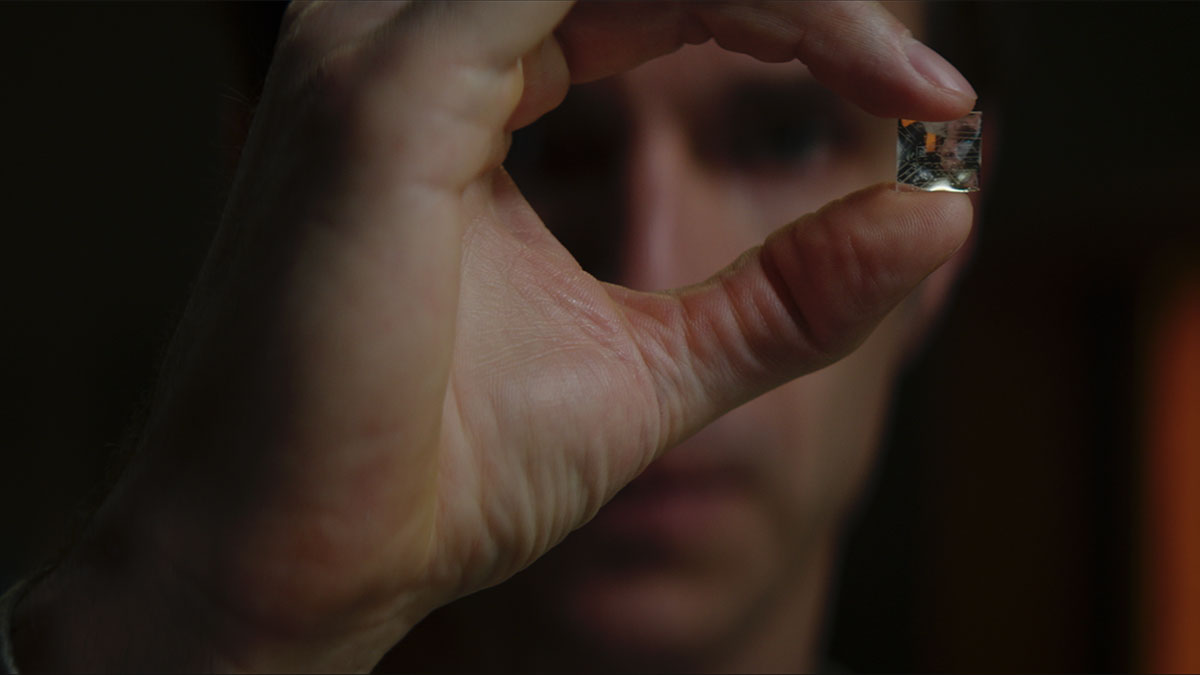 Adam Bird (James D’Arcy), a father of three who is estranged from his wife Reena (Anna Brewster), discovers that he has a terminal illness. Part of a programme known as Premium 3, which clones any parent of three of more children if they die, Adam prepares to be replaced but continues to work and tries to find some satisfaction as he enters his final days. With humans no longer able to go out in the sun, Adam throws himself into work and tracks down Donald Stein (Delroy Lindo), the man who is considered the father of cloning, to see if he can find some comfort in his final days.

‘LX 2048’ is a high-concept science-fiction film from writer/director Guy Moshe. Taking place in the (not too distant) future, the film introduces a world where technology has advanced to the point where people’s lives look nothing like ours do in 2020. Humans have adapted to be nocturnal due to not being able to go out unprotected in the sun, AI and VR have taken over most aspects of life, and everyone is taking a drug known as LithiumX to numb their depression.

Moshe takes ideas that are already advancing at an alarming rate and shows his idea of what the future could be like. Adam has been kicked out by his wife for ‘cheating’ on her with an AI sex doll and while everyone around him prefers to communicate in ‘The Realm’, a VR world, Adam longs for face-to-face contact. His only solace is Maria (Gabrielle Cassi), the AI sex doll that he discovers may be able to exist in the real world.

Cloning, which is the film’s main focus, is something that’s debated often at the moment and there is a growing fear surrounding it. In Moshe’s world, cloning is something that can be done to relieve the burden on parents if their spouse were to die. It has the added bonus that you can change features of your loved one’s clone, to make them better suited to your needs too. It’s a scary thought but when you think about it in the context of this film, would it be so bad if your children were brought up by someone who acted and looked like you, if you died? There’s no easy answer to that question.

Moshe packs a lot of ideas into ‘LX 2048’ and that’s perhaps one of the film’s main problems. There’s so much to take in and think about, that it’s a little overwhelming. It also means that all of the ideas can’t come to full fruition and that’s disappointing. The film also dives so deep into the science-fiction realm that it’s unlikely to appeal to anyone who isn’t a fan of the genre.

James D’Arcy as the film’s lead puts in a solid performance. His US accent may be dodgy from time-to-time but overall he’s convincing and sympathetic for the viewer. Delroy Lindo is underused as Donald Stein and ‘Station 19’s Jay Hayden pops up in a small but perky supporting role.

‘LX 2048’ is ambitious and that’s definitely one of its strengths. Moshe isn’t able to fully realise his vision and that means the film isn’t as satisfying as it could have been. The climax is more of a whimper than a bang, which is a shame as there are plenty of solid building blocks along the way. ‘LX 2048’ is certainly big on ideas but it could have been tighter and a little more focused in its execution.