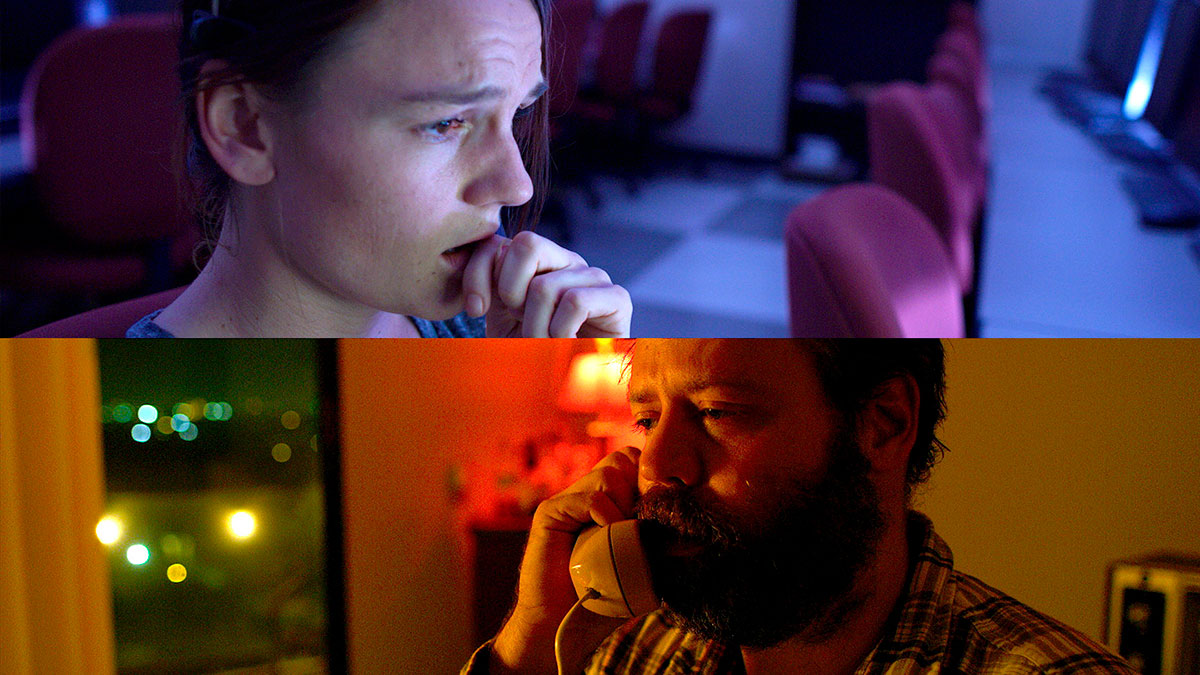 Scott (Daved Wilkins) spends his evening getting wasted at a bar before returning home where he dwells on how miserable his life is. As he continues pouring drinks for himself, he decides to call a suicide prevention hotline where his call is answered by janitor Beth (Sarah Booth). Initially Beth tries to get Scott off the phone assuring him that someone from the hotline will call him back the next day but when she realises how dire his situation is, she tries to keep him talking to prevent him from taking his own life.

‘Last Call’ is an innovative and powerful film from director Gavin Michael Booth, who co-wrote the screenplay with one of the film’s actors, Daved Wilkins. Presented as a split-screen experience, ‘Last Call’ allows viewers to watch both Scott and Beth over the film’s 77-minute duration. It takes a little bit of getting used to but once you adjust to seeing both characters at the same time, it’s actually a very interesting visual experience.

The subject matter of the film is hard-hitting and something you don’t see all that often. Scott is on the verge of ending his life. Estranged from his daughter and separated from his wife, his destructive behaviour has led him to the point where he feels there’s no point in continuing his life. His call to the suicide hotline is his last-ditch attempt at getting help but what he doesn’t realise, at least to begin with, is that Sarah is simply the janitor and not a trained counsellor.

From Sarah’s perspective, she’s a young single mother who is trying to provide for her son while finishing college. At the beginning of the film she’s distracted as her son has gone AWOL but she finds herself becoming very emotionally invested in Scott’s well-being. Her transformation from being simply polite to actively trying to utilise the tools at her disposal to talk Scott round is a fascinating one. The more she talks to him, the more his predicament starts to affect her and seeing her compassion come out, despite dealing with her own issues, is life-affirming.

The film hinges on the performances of its two leads and both Sarah Booth and Daved Wilkins are excellent. It’s not an easy task to hold an audience’s attention when there’s only two people on screen but these two actors manage it with ease. You become quickly invested in both of their characters and being able to see their reactions and body language through the split-screen gives you a much deeper connection to them both.

‘Last Call’ is a film that deserves to be seen far and wide. Not only does it shine a much-needed spotlight on male suicide, it also shows just how powerful the medium can be. ‘Last Call’ works as both a film and as a way to highlight a very serious issue. Director Gavin Michael Booth works his leads hard and the end result is something powerful and very special.