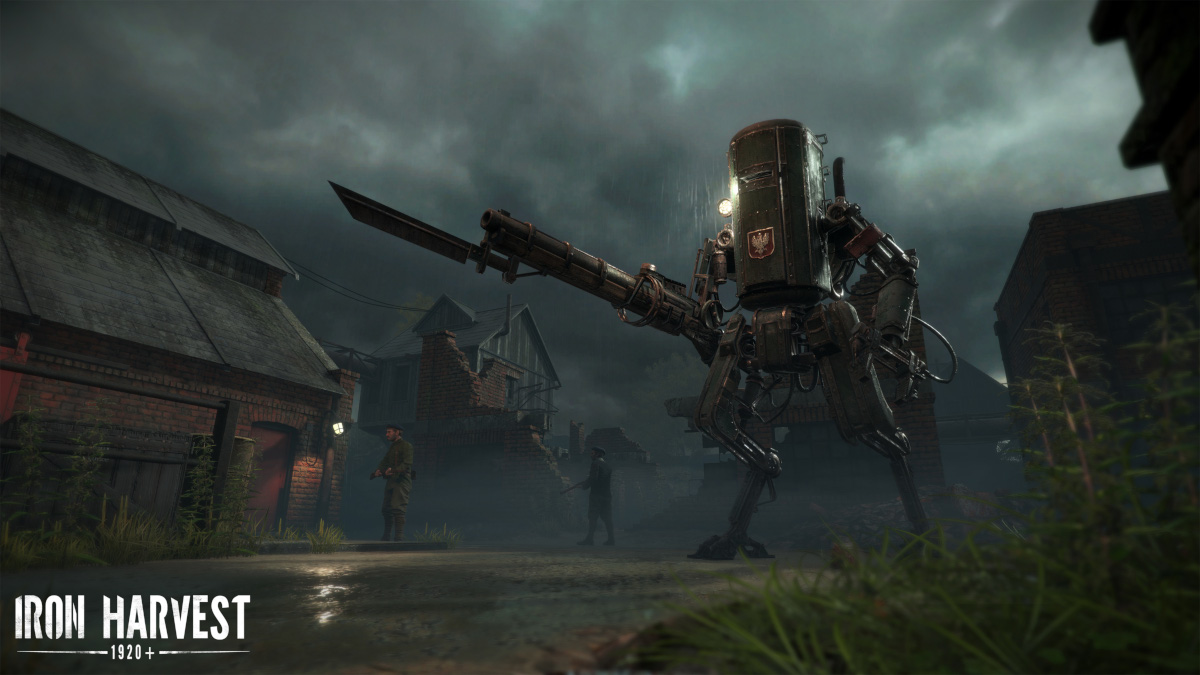 Iron Harvest is the recent RTS release from Developer King Art and publisher Deep Silver. Set in an alternate history circa 1914 ish where Czar Nicholas is still alive and Polania is subject to Rusvian rule. Oh, and there’s one other significant difference, in this timeline you have control of massive mechs too!

The mechs are clearly the big draw to the game and I’ll come onto them in a bit. The campaign sees you start out as Anna Kross, a Polanian resistance fighter as she attempts to rescue her father from the bad guy General Zubov. Along her way, she will gather followers and begin to make a name for herself as a leader of the resistance. Her best friend is a massive bear who takes delight in savaging your enemies.

The campaign is actually three stories woven into one and this leads to quite an interesting story with cut scenes at the start and end of each mission keeping you filled in on whats going on. The cut scenes themselves aren’t the prettiest of things but they serve their purpose well.

After a fairly detailed tutorial (which I recommend you play through) you are thrown into the game proper and set about rescuing your father. Missions range from standard RTS tropes such as capturing resource points and destroying specific targets, base building and defending strategic points plus there’s also a stealth mission that at best is infuriating.

Combat in Iron Harvest offers lots of tactical options. All of the factions are well balanced and you’ll need to use your different troop/mech types effectively to maximise your chance of winning. Use of cover and flanking is encouraged and if you can get the hang of this your battles will go much more smoothly.

The cover mechanic, although a good idea, is poorly implemented. Enemies will often use the same piece of cover that your troops are using and this degenerates into two forces shooting at each other over the same wall. The AI’s use of cover is so poor in fact that it makes flanking a bit too easy in my opinion. The maps also don’t seem to have been designed to make the most of cover options often forcing you to charge headlong into the enemy when other tactical options look like they should be available on the map.

As you would imagine, base building is an important part of the game and the process here is pretty streamlined. Although your base plays a key role the game the process is nice and streamlined and once set up properly you won’t need to micromanage anything meaning you can focus on the mission at hand.

Now let’s talk about the mechs. The mechs in Iron Harvest range from lightly armoured scouts with long-range rifles, machine-gun-toting heavily armoured tanks to melee focused mechs. Each mech has it’s own pros and cons and needs to be used effectively to get the most out of it. In the example above, the machine gun mech is great for suppressing enemy infantry whilst you manoeuver other units into place but not too great at anything else. The melee mechs are quite slow with limited ranged capacity so if you simply charge them in headling they’ll be taken out in short order.

The use of the mechs forces you to think out your strategies and this is a good thing. In early to mid game (before you unlock the stronger mechs) proper use of tactics will ensure your victory whilst charging in blind will result in a quick defeat. Towards the end of the game, things do degenerate into who has the biggest guns somewhat as the more powerful mechs tend to dominate combat.

In addition to the campaign, Iron Harvest offers some special mission challenges and a great multiplayer mode. Multiplayer games start off as small skirmishes with the enemy as you attempt to capture resource points. As you progress the battles become much grander in scale as you unlock more and more troop and mech types. No match ever plays out the same and the multiplayer is definitely what will keep people coming back for more.

Overall, Iron Harvest is a strong addition to the RTS genre. It has a great story which will encourage you to complete the campaign and the multiplayer mode is very strong. Yes, there are some wonky mechanics in the game, yes cover system I’m talking about you, but overall the whole package is very satisfying. If you like RTS games such as Company of Heroes then I heartily recommend you give Iron Harvest a chance.

Iron Harvest was reviewed using a digital code purchased by the reviewer.