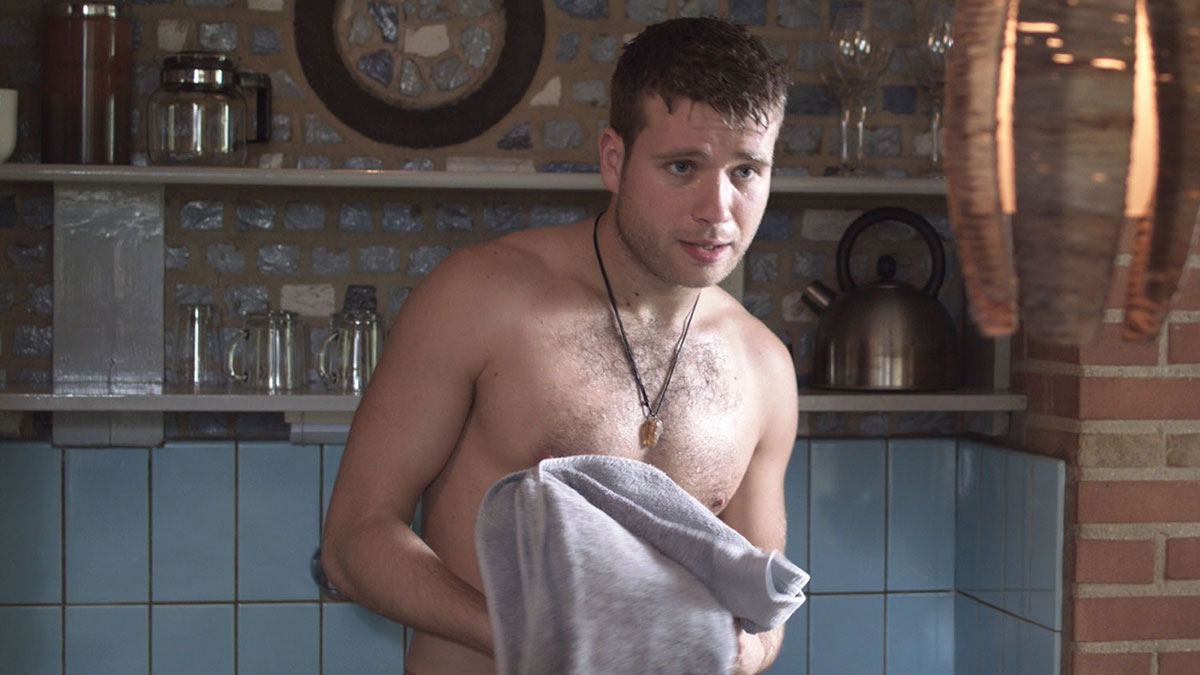 New Queer Visions continues its output of shorts collections with recent release ‘Right Beside You’. Pulling together shorts from Mexico, Brazil, France, the UK and the Netherlands, this release is themed around men looking for someone to be at their side either for romance or support. All of the shorts have been on the festival circuit and now they’re together in one collection for the first time.

Opening with Mexican film-maker Samuel Montes de Oca León’s ‘My Mother’s Lovers’, ‘Right Beside You’ gets off to a strong start. Telling the story of Cesar (Cesar Acosta), the short explores a mother-son relationship where the mother’s habit of bringing home her boyfriends causes friction with her son. Cesar decides to invite his own friend over, Pablo (Alonso Esponda), hoping that his burgeoning feelings for his classmate might be reciprocated. Of course, Cesar is left disappointed but also shocked when his friend makes a move on his mother.

The short definitely puts your jaw on the floor and you really feel for Cesar. He doesn’t have a whole lot of confidence in the first place but seeing his mum flirting with his friend, and doing possibly more, is pretty horrifying. Add to that the crushing blow that Cesar’s crush isn’t interested and it’s a painful opening to ‘Right Beside You’.

The other four films on the release are a mixed bag. French film-maker François Barbier tells a tale of two opposites who initially don’t get on but find they have more in common than they thought in ‘Bootyful’. For me, it was one of the weaker shorts here but it’s followed by the Brazilian film-maker Maria Augusta V. Nunes’ emotive ‘Only What You Need To Know About Me’, which focuses on a transgender skater girl who falls for a skater boy but is frightened to honest with him about herself.

UK film-maker Joe Morris delivers the grittiest short here with the drug-themed ‘Junk’, which finds two boys living on the streets and doing what they need to in order to survive. Tat (Luke Dunsmore) is desperate to be loved by his only remaining friend Jack (Connor Ryan) but the two enter an almost psychologically abusive relationship while trying to understand what they are to one another.

‘Right Beside You’ comes to a close with Claire Zhou’s ‘High Tide’, a short from the Netherlands that explores an unexpected romance between a recently divorced Moroccan man and the owner of the cottage he’s renting. It’s a classic tale of not wanting to give in to temptation but lust over-taking what the head is saying. The short is the strongest one here and it opens up questions about society’s expectations and sexual repression.

‘New Queer Visions: Right Beside You’ is yet another strong release from NQV Media. Their output has been of a high quality so far and they really are seeking out the best shorts on offer from around the world. While I didn’t love every single one on this collection, overall I appreciated what the film-makers were trying to do and there’s definitely more right here than wrong.

In this article:New Queer Visions: Right Beside You, NQV Media