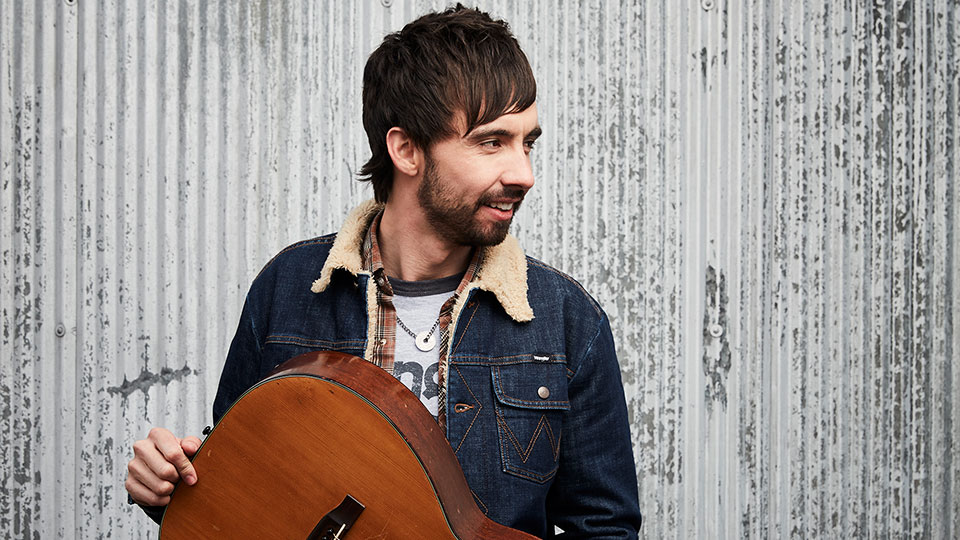 Illinois native Mo Pitney won over country audiences with his distinctive vocals, strong songwriting and old-school country sentiments when he burst onto the scene with his 2016 debut album, Behind This Guitar, which reached the top 10 on Billboard’s Country Albums chart. Since then he’s wowed crowds around the world, including UK fans at the C2C Roadshow in 2018. After taking some time out to build his house and spend time with his family, now he’s released his follow-up record, Ain’t Lookin’ Back.

The album opens with A Music Man, featuring Jamey Johnson, and right from the off it sets out Mo’s stall and his mission statement as an artist. It’s a mellow, acoustic guitar-led number with a laid-back vibe and really shows off the warmth and richness in Pitney’s voice, which blends really nicely with Johnson’s. His subdued, soft delivery gives the song a sense of gravitas and there’s a real honesty throughout as he sings about childhood dreams of being a musician and love of performing. It’s a very simply structured song but also incredibly powerful – I think it could well become his signature tune – and really sets the template for the rest of the record.

One thing which struck me throughout the album is that it has a really classic, timeless feel about it. Til I Get Back To You is a midtempo tune with plenty of old school country vibes, traditional instruments like steel guitar and a touch of California sunshine that feels like it could have been released in 1970 as easily as in 2020. Elsewhere, the radio-friendly, classic rock-influenced Boy Gets The Girl features a soaring chorus, bluesy guitars and a frank, heartfelt message which takes a surprisingly personal and dramatic turn towards the end, and Old Stuff Better – which sees Pitney singing about his love for vinyl records and handwritten letters – has a soft, delicate feel, with great harmonica melodies and a warm, wistful quality that really conveys the song’s sense of history and family.

That nostalgic retro vibe also carries over to the lyrics. Ain’t Bad For A Good Ol’ Boy is all about celebrating the simple things in life and is full of wordplay and great little details, including vivid images of breakfast cooking and a name check for Pitney’s wife Emily, as well as showing off a little bit of gravel in his voice. Meanwhile, Mattress On The Floor creates a wonderfully precise picture of a young couple moving into their first home through snippets like diamond rings, takeout in the fridge and old Merle Haggard T-shirts. It’s a very simply structured song but Pitney packs so much into it and there’s plenty of depth and drawl in his vocals too.

However, although this is very much a serious record, there are plenty of lighter moments too. The uptempo Right Now With You is an early highlight in that regard, with a big singalong chorus and lots of twangy guitars. It’s clear that Pitney is absolutely revelling in the feeling of being in long-term love and as a result it’s impossible not to warm to the song – I can imagine this one being sung out loud by an audience at a show (hopefully we can do that again sometime soon!). Meanwhile, Old Home Place, a collaboration with His All Star Band, is a lively banjo-led tune that already feels like a country standard, with tons of energy, surprisingly emotional vocals and a brilliant fiddle solo, and Local Honey mixes honky-tonk piano with a funky groove and a playful, lighthearted feel (and some big notes from Pitney on the chorus) but stays on the right side of cheesy.

For me the standout track on the album is the title track, which comes exactly halfway through. It’s a driving, stomping number with a sweeping chorus that sees Pitney making a fresh start and carving his own path. He delivers every line with complete conviction, showing off the sheer power in his voice and you truly believe that he’ll succeed in achieving his goals. Although the message of the song is very simple, it has a huge impact and very much feels like planting a flag in terms of what he wants to do with his career and feels very much like a departure from the rest of the album. Looks Like Rain is another highlight, showing off Pitney’s skill as a songwriter in capturing snapshots of his narrator’s life in references to mini blinds and a ‘worthless weatherman’ as well as a truly surprising twist in the chorus and a slightly 80s feel in the outro. He has a great ability to capture a sense of place and feelings in very few words and there’s a refreshing straightforward feel to his songwriting that makes it very easy to connect with.

The album closes with Jonas, which is another very different song compared to the rest of the record. It’s an atmospheric, acoustic-led song telling the story of the crucifixion and resurrection of Jesus, and Pitney really brings to life the figure of a man witnessing these miraculous events and the questioning which leads to his growing faith. The song has an unsettling, almost haunting feel about it in places and Pitney really shows off the rich tones in his voice as well as his ability to belt towards the end. It’s an incredibly strong, powerful note to end on and continues the theme of establishing him as an artist in this own right and what he wants to do.

Overall Mo Pitney has made a fantastic album with a wonderful timeless quality that marks a huge step forward for him as an artist. His vocals throughout are fantastic, balancing warmth, richness and smooth qualities, and he’s come on in leaps and bounds as a songwriter since his previous record, with plenty of tricks but also a great sense of confidence in himself and what he stands for. ‘Don’t overdo it, overstate it’, he sings on the heartfelt, relaxed Plain And Simple – and you really feel that could be a motto for the album, and for Pitney himself. He’s truly come into his own with Ain’t Lookin’ Back and I’m excited to see where he’s going to go from here.

Advertisement. Scroll to continue reading.
In this article:Mo Pitney